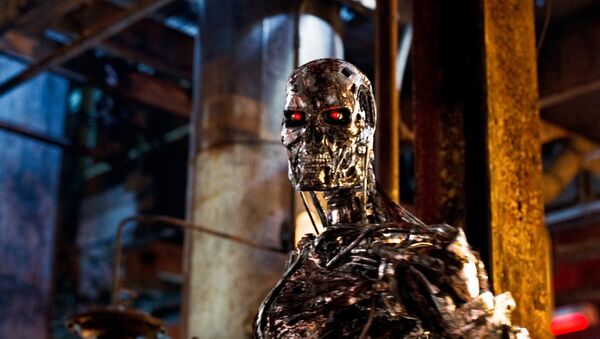 © Photo : Sony Pictures Releasing CIS
/
Go to the photo bank
Subscribe
The war between robots and humans will become possible in 2055, as by that time intelligent machines globally will outnumber humans and will likely want to take control of the world, a science fiction author has predicted.

US Rushing to Keep Up With Russian, Chinese Killer Robots
Artificial intelligence will be capable of challenging their human creators within the next 40 years, when they will surpass people in number and will likely demand self-control, Logan Streondj, a software programmer turned science-fiction author wrote in his blog.

“The most likely time-frame for an artilect war style conflict would be between 2040 and 2055,” he wrote, according to Business Insider.

Streondj made his assessments while preparing his new novel, “A home for robots or-else artilect war.” To arrive at the prediction he compared statistical data from open sources and concluded that robots are developing and growing in numbers faster than humans do.

The number of robots is increasing much quicker than that of humans, he pointed out. The human population grows by one percent annually, while the robot production capacity has an approximate year-to-year increase of 15 percent.

Killer Dog Soldiers: Google’s Useless War Robots Rejected by US Marines
“In around 25 years, parity will be reached — the number of robots and humans being produced per year will be the same,” he stated.

But taking into account that an average robot’s working life is around a seventh of average life expectancy of a man, Streondj outlined, about seven times more intelligent machines per year will be needed to match the human population by 2050.

“If, however, there is no assistance from humans fighting for the entitlements of robots, and the robots are forced to revolt by themselves, likely they would do so when outnumbering humans 10 to 1, which would (assuming trends continue) be in 55 years, or around 2070.”

Streondj joins a long list of those who have predicted there could be some kind of a standoff between humans and robots in future.

Stephen Hawking to Unveil Virgin Galactic’s New SpaceShipTwo in February
Stephen Hawking claimed in 2014 that robots will become more intelligent than people in the next 100 years, and will possibly cause the end of humanity. Nick Bostrom, an Oxford University scientist, reiterated that idea, adding that robots will define the forms of human existence.

Prominent business magnates including PayPal creator and SpaceX CEO Elon Musk and Microsoft cofounder Bill Gates have both said that AI will likely become an “existential threat” for human beings sooner or later.

000000
Popular comments
Osamu Tezuka's Astro Boy (Mighty Atom) warned us of this 50 years ago. If,if only we had LISTENED!

Mark Gewiss
6 January 2016, 01:31 GMT
000000
A group of , autistic may really believe that robots will have no fail safe that will stop them in their tracks. IF that fails. Count Russia death ray , by then an EMP kind of blast.
cast235
6 January 2016, 02:02 GMT
000000
Newsfeed
0
New firstOld first
loader
LIVE
Заголовок открываемого материала
Access to the chat has been blocked for violating the rules . You will be able to participate again through:∞. If you do not agree with the blocking, please use the feedback form
The discussion is closed. You can participate in the discussion within 24 hours after the publication of the article.
To participate in the discussion
log in or register
loader
Chats
Заголовок открываемого материала
Worldwide
InternationalEnglishEnglishMundoEspañolSpanish
Europe
DeutschlandDeutschGermanFranceFrançaisFrenchΕλλάδαΕλληνικάGreekItaliaItalianoItalianČeská republikaČeštinaCzechPolskaPolskiPolishСрбиjаСрпскиSerbianLatvijaLatviešuLatvianLietuvaLietuviųLithuanianMoldovaMoldoveneascăMoldavianБеларусьБеларускiBelarusian
Transcaucasia
ԱրմենիաՀայերենArmenianАҧсныАҧсышәалаAbkhazХуссар ИрыстонИронауОssetianსაქართველოქართულიGeorgianAzərbaycanАzərbaycancaAzerbaijani
Middle East
Sputnik عربيArabicArabicTürkiyeTürkçeTurkishSputnik ایرانPersianPersianSputnik افغانستانDariDari
Central Asia
ҚазақстанҚазақ тіліKazakhКыргызстанКыргызчаKyrgyzOʻzbekistonЎзбекчаUzbekТоҷикистонТоҷикӣTajik
East & Southeast Asia
Việt NamTiếng ViệtVietnamese日本日本語Japanese俄罗斯卫星通讯社中文（简体）Chinese (simplified)俄罗斯卫星通讯社中文（繁体）Chinese (traditional)
South America
BrasilPortuguêsPortuguese
NewsfeedBreaking
03:00 GMTRome Says G20 Summit on Afghanistan Expected in Coming Weeks
02:51 GMTGermany's Social Democrats Win Election After Gaining 25.7% of Votes, Election Commission Reveals
02:24 GMTMerkel's District in Mecklenburg-Western Pomerania Falls Into SPD's Hands
02:17 GMTTexas Gov. Abbott Vows to Employ US Border Patrol Agents Whose Jobs Are 'At Risk' by Biden Admin
02:05 GMT'You F'd Up Your Presidency': Graham Reportedly Blasted Trump After He Refused to Concede Election
01:31 GMTRussian Embassy Calls on US Authorities to Ensure That Yaroshenko Gets Medical Assistance
00:57 GMTIAEA Claims Iran Failed to Fully Honor Agreement on Nuclear Monitoring Equipment
00:18 GMTYouTube Head Expects to Continue Work in Russia Despite Disagreements With Authorities
YesterdaySeoul Calls on Pyongyang to Restore Communication Lines Ahead of Possible Talks
YesterdayEuropean Commission Vice President Congratulates SPD With Strong Social Democratic Result
YesterdayAlternative for Germany to Continue Supporting Nord Stream 2 After Election - Co-Chairman
YesterdayMilitants in Aleppo Tried to Force Way From Turkish-Controlled Area - Russian Military
YesterdayGermans See No Use to Vote for CDU Without Merkel at Helm - Afd Politician
YesterdayGerman Conservatives Suffer Catastrophic Defeat in General Election – Senior Official
YesterdayGermany's FDP Leader Hints at Coalition Talks With Greens
YesterdayMacron Files Complaint Against Paparazzi for Invasion of Privacy - Reports
YesterdayTwitter Removes Blue Verified Badge From Accounts of Several Afghan Ministries - Reports
YesterdayLaschet, Scholz Want Coalition Talks to End by Christmas
YesterdayCIA Was Ready to Start Firefight in London to Prevent Russia From Busting Out Assange, Media Claims
YesterdaySuicide Pact? Top Labour Remainer Says Party Should Campaign to Rejoin EU