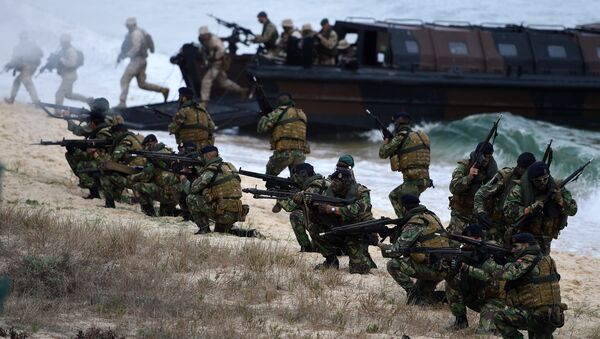 While Russia has called NATO’s expansion one of its main security threats, the Alliance categorically denies any ill-intent toward Moscow – even as it creeps deeper into Eastern Europe and the Baltics.

Last Thursday, Russian President Vladimir Putin signed a new security doctrine for 2016 which cites the North Atlantic Treaty Organization as a primary threat to peace. Putin accused NATO of breaching international law and of advancing its military installations along the Russian border.

On Tuesday, NATO spokesperson Oana Lungescu stressed that the Alliance rejects any notion that it poses a threat to Russia.

"We categorically reject totally unfounded claims that NATO and its policies constitute a security threat [to Moscow]," Lungescu said, according to the Associated Press. It followed her comment last month that "NATO’s enlargement is not directed against anyone."

But actions speak louder than words, and over the past year, NATO has steadily increased its presence in Russia’s sphere of influence, and conducted a number of provocative, large-scale military drills along Russia’s borders.

In August and September, 5,000 soldiers from 11 NATO member states took part in Swift Response 15, the largest air drills since the end of the Cold War. These occurred across Germany, Italy, Bulgaria, and Romania.

In October, the Alliance also enacted "Trident Juncture 2015," which it described as the "largest and most ambitious exercise in over a decade." Those involved roughly 36,000 troops, over 140 aircraft, and 60 warships from all NATO member states. The training scenario involved defending a fictitious country dubbed Lakuta from a “blatant invasion” by a neighboring country called Cerasia, a thinly veiled reference to Russia.

The organization’s eastward expansion is also highlighted by its membership invitation to Montenegro, as well as the United States’ deployment of ballistic missile defense system into Eastern Europe.

While NATO expresses outrage over Russia’s new security doctrine, the Alliance has made no secret about the fact that it also views Moscow as a primary threat. In November, Stoltenberg was asked if Trident Juncture was intended to send a message to Moscow.

While claiming that the exercise was generally targeting "any potential adversary," he then went on to tell reporters that "one of the reasons why we have increased our military presence in the eastern part of our alliance [is] Russia deploying advanced military capabilities both in Syria and the eastern part of the Mediterranean."

Then, of course, there is the downing of the Russian Su-24 bomber in Syrian airspace, carried out by NATO member Turkey. While Moscow has shown no aggression toward NATO, the Alliance has acted to the contrary.