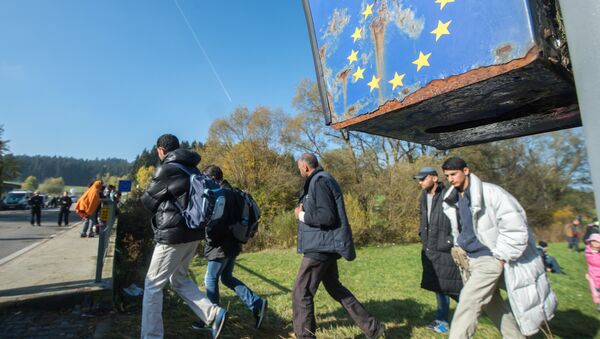 Europe was hit by crises during 2015, including the terrorist attacks in Paris and an unprecedented influx of refugees. Instead of bringing relief, 2016 may bring a collapse.

A referendum on Britain’s exit from the EU planned for 2016 may become the first part of the breakup of Europe, journalist Griff Witte wrote in his article.

"Europe was pummeled by crises from start to finish in 2015, with terrorist attacks, bankruptcy brinkmanship and an unparalleled refugee influx combining to leave continental unity in tatters by year’s end. But instead of relief, 2016 could bring an unraveling," the article read.

End of Europe: Merkel is Doing Good Job at 'Destroying Her Own Continent'
While the already existing problems are likely to deepen Britain will add more instability to the situation with its referendum on leaving the EU. Once considered an unrealistic prospective, now many see a 50-50 chance that the country will part ways with Brussels.

If Europe fails to solve all of its problems in the near future the number of EU-sceptic Britons is likely to rise. And many experts say the problems are far from being resolved.

"Given that by any objective measure the EU is in a terrible mess, I’m shocked that the 'in' campaign is still getting half," Charles Grant, director of the London-based Center for European Reform, told The Washington Post.

If Britain finally leaves the bloc this would have no precedents in the history of the EU. This will reverse what had been seen as the inexorable expansion of the union to bring peace and stability to the "historically bloody lands of Europe."

"A British exit could hasten a broader EU breakup, with continental leaders despairing that an already strained union may struggle to survive without one of its cornerstone members," the author underscored.

As a result, the United Kingdom is likely to fall apart, especially if Scotland revives its demand for independence. Washington, too, has much to lose if Britain votes for leaving.

"But all of that may not be enough to outweigh the anxieties of British voters who gaze across the English Channel and see nothing but trouble," the author wrote.

The cabinet of David Cameron is also in doubts on whether to stay or leave. According to the article, after the referendum Cameron may resign.

If Britain, the world’s fifth-largest economy and military, leaves the EU the bloc would be greatly diminished. It would also take Europe’s focus away from its other problems, which continue to demand urgent attention, the author concluded.