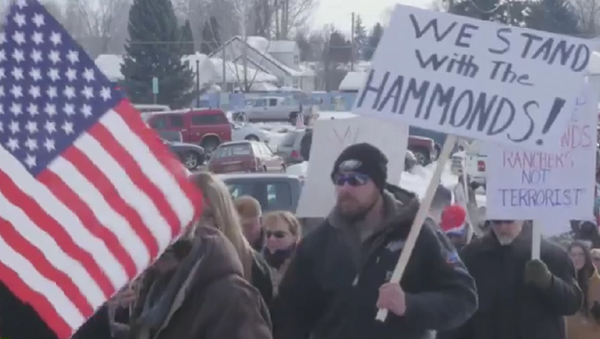 © Ruptly . Ruptly TV
Subscribe
International
India
Africa
Militiamen occupied US Wildlife Reserve claiming “government has beat us, oppressed us, and took everything from us.”

United States federally-administered wildlife refuge in the state of Oregon was occupied on Saturday by a group of self-described militiamen who state that they are "willing to kill or be killed," but will not leave the refuge until the government fulfills their demands.

Around 150 armed people calling themselves "patriots" gathered at the Malheur National Wildlife Refuge claiming that they will stay indefinitely, in protest against government "tyranny," according to The Oregonian.

Of Ranchers And Rancor: The Roots Of The Armed Occupation In Oregon: A self-styled militia… https://t.co/s8Z71hBNlM pic.twitter.com/NS6GPWHody

The occupation directly followed a peaceful demonstration against a court ruling convicting local ranchers with multiple counts of arson beginning in 1991.

Harney County ranchers Dwight Hammond, 73, and his son Steven, 43, were convicted in court for lighting fires that subsequently spread to federally-owned land. Attempts were also by the family to cover up evidence of their illegal slaughter of deer, according to federal investigators. The Hammonds, whose lawyer has disavowed any connection with the militias, claimed to be reducing the growth of invasive plants and creating firebreaks to protect their land from wildfires.

Two militiamen in a video on Facebook claimed the occupied federal land was now a "a base place for patriots from all over the country to come to be housed and live here."

One occupant added that their intentions are to return the land and resources to people.

Here it is. Please know these men will speak to people civilly. Do not go up there guns blazing. Stay safe and smart….

A second man in the video claimed that the only way to prevent unlawful action by the US government is to occupy land.

"This is the power of America right here. People got together for this and it doesn't have to stop here. This could be a hope that spreads through the whole country. Everybody's looking for this hope because the government has beat us, oppressed us and took everything from us. They will not stop until we tell them no."

The FBI and other state and local authorities have asked people to stay away from the area until the situation is returned to normal.