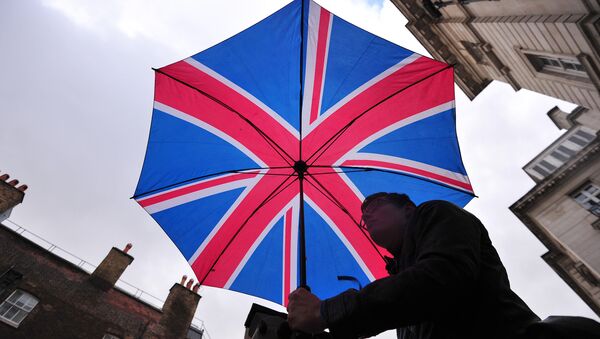 © AFP 2021 / Carl Court
Subscribe
The chances of the UK leaving the European Union are rising, according to a leading investment bank, with frustration over the government’s reform negotiations driving Euroskepticism.

Analysts at the French bank Societe Generale (SocGen) say that there is a 45 percent chance that the British public will vote to leave the EU when they take to the polls in the EU referendum, which will be held before the end of 2017.

Although no formal date has been set for the referendum, it is thought the vote could be held as early as the mid-2016.

“@duncanrobinson: SocGen says there's a 45% chance of Brexit. pic.twitter.com/wUWnrptjZI” With up to 1% annual GDP loss for 10 years #brexit

​SocGen analysts have warned that leaving the bloc would hinder UK economic growth for ten years.

"Financial markets seem to have taken little notice of this event. There is a high risk that the UK could vote to leave the European Union with significant economic damages resulting from such a risk scenario," Patrick Legland, head of global research at the bank said.

The warnings come as a number of polls in the UK indicated that the gap between the 'In' and 'Out' campaigns was shortening.

Many analysts have highlighted Brussels' handling of the Greek debt and refugee crises as factors influencing anti-EU sentiment in Britain since the summer of 2015.

​A recent survey for Ipsos Mori in December found that 41 percent of those surveyed wanted to 'Leave' the EU, while 42 wanted to 'Remain'. However, other polls have suggested that there is still a healthy majority of Britons who wish to remain inside the bloc.

​On top of hindering economic growth in the UK, the prospect of a Brexit would also have "substantial" impacts on the Eurozone, according to SocGen, who have warned the single currency's GPD could drop by up to 0.1 percent over the next decade in the event of a Brexit.

However, new evidence has suggested that an increasing number of UK businesses are in favor of leaving the EU.

According to a Deloitte's CFO survey, only 62 percent of finance chiefs are against a Brexit, down from 74 percent in the second quarter of 2015.

Where do UK businesses stand on #Brexit? Find out in Deloitte's latest #CFOSurvey http://t.co/D4jBLlbT7t pic.twitter.com/QQdchDOU4T

"A clear majority of CFOs continue to favor of the UK remaining in the EU, but the proportion of those expressing unqualified support has fallen. This mirrors what we have seen from the broader public in opinion polls in the last six months," Deloitte CEO David Sproul said.

Complicating matters is the current state of Britain's reform proposals, with London's demands to limit certain in-work benefits to EU migrants being rejected by all 27 other member states.

'Cameron Came, Saw and Got Hammered': EU Rejects UK PM's Welfare Plans
Many Euroskeptics believe that David Cameron's reform proposals have already been severely watered down, with critics fearing the PM may need to scrap or once again give concessions to EU member states over the issue of EU migrant benefits, which they believe isn't enough to keep the UK in the bloc.

Other anti-EU campaigners believe that the prime minister's reform negotiations are merely lip service and won't have a substantial impact on Britain's relationship with the bloc.

Mr Cameron has said that his preference is for Britain to remain in a reformed EU, he hasn't ruled out campaigning to leave the bloc in the referendum, should he not be granted the reforms he desires.

Mother Gorilla
4 January 2016, 17:05 GMT
000000
Let me make a prediction. If the British people vote to leave the EU, their government will continue to negotiate with the EU and, after a brief interlude, hold a new referendum. And, if that also produces the "wrong" result from the government's point of view, it will go on holding such referenda until the public comes up with the "right" answer. Or am I being cynical?