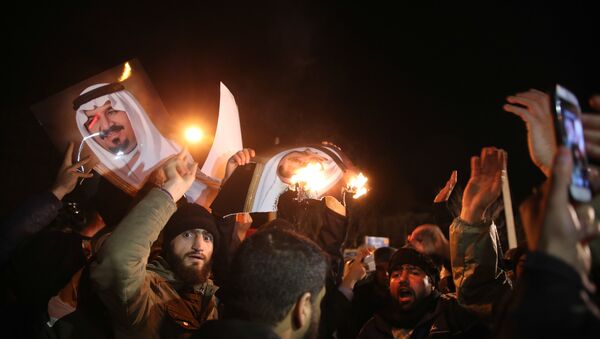 © AFP 2022 / ISNA / MOHAMMADREZA NADIMI
Subscribe
The conflict between Saudi Arabia and Iran could spark a conflict considerably more damaging and horrific than the Iran-Iraq War, but would they actually do it?

Kirill Vysokolov — After Saudi Arabia and Iran broke off diplomatic relations on Sunday, the prospect of war between the two countries has become a new concern.

The two countries are already said to be involved in proxy wars against each other in Yemen and Syria. The new escalation with the killing of a prominent Shiite preacher draws parallels to the 1980s, which led to a conflict that threatened to engulf the whole region.

A war between the two countries would not be in the interest of any major power, as such a conflict would both spread regional instability and create shocks in the global oil supply. However, Saudi Arabia has apparently already said that it would not obey orders from Washington.

"Every time the Iranians do something, the U.S. backs off. In the meantime, Saudi (Arabia) is actually doing something about it in Syria, in Iran and in Yemen. The Saudis really don't care if they anger the White House," an "insider" source simultaneously told AP and Reuters on Sunday.

The source later told Reuters that the Saudis do "care" about the White House position, "But it's an instance in which the Saudis [feel they] need to forge ahead on their own in their own best interests in terms of dealing with Iran in the region."

Internal tensions between Sunnis and Shiites, together with overlapping economic and political interests already led to the highly destructive Iran-Iraq war, which lasted between 1980 and 1988. The initial Iran-Iraq standoff in 1980 also involved the execution of a key Shiite cleric, Muhammad Baqir al-Sadr by Saddam Hussein's government amid increasing unrest amid Iraq's majority-Shiite population.

Unlike the Shiite unrest occasionally witnessed in Saudi Arabia as part of what has become known as the Arab Spring, the Shia unrest in Iraq was in part influenced by Iran's Islamic Revolution, which sought to overthrow both monarchies and secular republics across the Middle East.

Iraq's influential Shiite political leader Nouri al-Maliki referenced the killing of al-Sadr when he pledged that Saudi Arabia would be toppled following its killing of preacher Nimr al-Nimr.

Outside of the al-Nimr killing, Saudi-Iranian relations are at their worst since 1987, when Saudi Arabia broke off relations with Iran following an apparent massacre of Iranian pilgrims in Mecca during a Hajj. That massacre led to a storming of the Saudi embassy in Iran by angry youths and the death of a Saudi diplomat. Saudi Arabia severed relations with Iran for four years in response.

Besides the ethnic and religious conflict between Saudi Arabia and Iran, the lifting of sanctions as a result of the Iranian nuclear deal would create competition for both Saudi Arabia's oil production and its ally Qatar's natural gas production at a time when hydrocarbon prices are already at historic lows.

Iran has expressed discontent with Saudi Arabia's standing in the OPEC oil cartel in recent months, which refuses to reduce its own production quotas amid a global supply glut. The differences led to a dispute at the cartel's meeting in December, which saw the practical lifting of production quotas ahead of Iran's re-emergence in the organization, apparently masterminded by the Saudis.

"The fact that Iranian-backed Houthi militants are squaring off against Saudi-led troops in Yemen is not helpful, as increased Iranian oil revenues are likely to find their way to Iranian military interests in Yemen, Iraq and Syria," investment strategist Robert Minter told Reuters at the time.

Conflict in the Persian Gulf between Iran and Saddam Hussein's Iraq already led to a confrontation in which the two sides bombed each other's supertankers in 1987. At the time, Iraq attacked Iranian oil shipping, hoping that Iran would blockade all oil through the Strait of Hormuz, bringing in US military intervention. 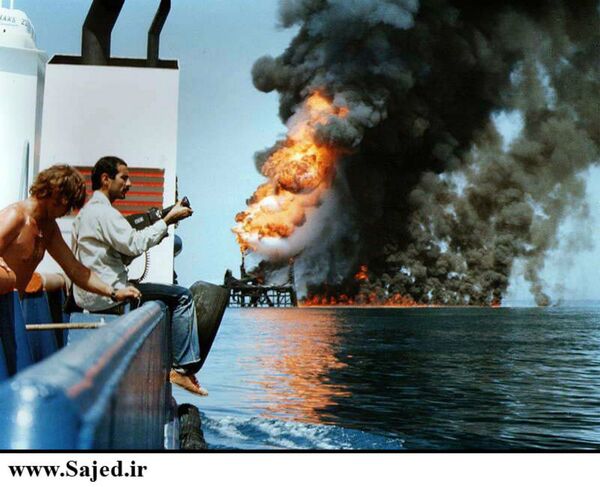 Instead, Iran attacked Iraqi and later Kuwaiti shipping, after Kuwait took over Iraq's oil exports. The United States and Soviet Union then protected Kuwaiti shipping from Iranian attacks. The operations led to several high-profile incidents, involving the "accidental" Iraqi bombing of a US Navy frigate, killing 37 US Navy personnel and the negligent US downing of an Iranian airliner, killing 290 civilians.

The Iran-Iraq conflict itself nearly grew into a confrontation between Iran and Saudi Arabia, though Iranian plans to attack Saudi and Kuwaiti oil facilities were apparently foiled.

Iranian Missiles Only Threaten Saudi Arabia, Not the US
Military Capability


The two sides have also been growing their military capabilities, despite having achieved warm relations as recently as 2005. Iran's military is considerably larger in terms of manpower and militia units such as the Iranian Revolutionary Guard Corps (IRGC), which played a pivotal role in the Iran-Iraq War.

However, Saudi Arabia's military budget is nearly eight times bigger than Iran's. The country spends 11.4 percent of its gross domestic product (GDP) compared to Iran's 2.8 percent, which is roughly the average for most countries around the world.

Saudi Arabia does have an advantage in equipment, which it has been purchasing from all large suppliers. Despite historically uneasy relations, Saudi officials visited Russia in 2015 to consider purchasing weapons. The Saudis were most interested in ships and Iskander missile systems, both crucial for warfare in the Persian Gulf, where Iran has used swarms of small boats to attack larger vessels and both sides have acquired ballistic missile technology.

"Yes, we are interested, that's why we are here, and we are not only talking about the navy. We are interested in frigates, corvettes and guard ships," deputy head of the Saudi Arabian Navy Admiral Ibrahim Nasir said at a Russian military exhibition in June 2015.

Saudi Arabia is at a disadvantage when it comes to neighbors, as Houthi militias almost regularly attack Saudi territory with troops as well as missiles. At the has allies around the Persian Gulf which it has worked together with in coalitions, such as Bahrain which broke ties with Iran on Monday, it has in recent months practically lost long-time partner Pakistan when it comes to military cooperation.

Saudi Arabia is rumored to have sponsored Pakistan's nuclear program as a balance against Iran. However, Pakistan, now a major partner of China, has rejected Saudi military initiatives in both Yemen and Syria, refusing to join coalitions.

Iranian Ayatollah Condemns Execution of Shiite Cleric in Saudi Arabia
Would They Do It?

Although historic risk factors, competing economic interests and a military buildup appear to converge and determine the inevitability of war, there are also many factors that would delay such a reaction.

For one, Saudi Arabia and Iran have no long-standing border disputes unlike Iran and Iraq in 1980, and share no common border. Without that, direct military action would be more difficult, and largely confined to naval warfare.

Additionally, the diplomatic mission attack appears to be a tactic used by Iran to quell internal tension. The fact that Saudi Arabia and Iran have settled such disputes in the past could mean that such experience could be used again.

Lastly, the two sides have very large but asymmetrical military forces. Iran's poor experience with asymmetrical warfare in the Iran-Iraq War, which killed over a million soldiers and civilians with no territorial gains, together with the Saudi military's inexperience, could also act as a deterring factor for any offensive operations.