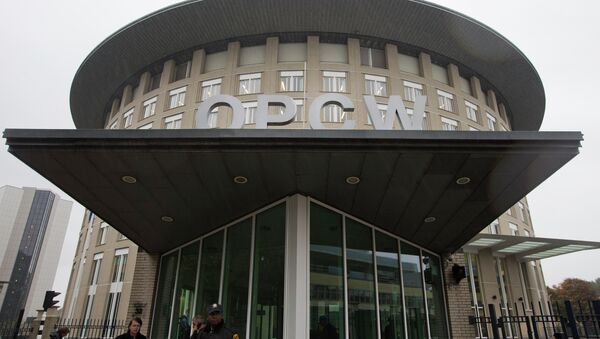 MOSCOW (Sputnik) — The Organization for the Prohibition of Chemical Weapons (OPCW) said in a Monday statement that the process of Syrian chemical weapons destruction was completed.

Syria Blames UN, OPCW for Chemical Weapons Elimination Delay
"Veolia, the US firm contracted by the OPCW to dispose of part of the Syrian chemical weapons stockpile, has completed disposal of 75 cylinders of hydrogen fluoride at its facility in Texas. This completes destruction of all chemical weapons declared by the Syrian Arab Republic," the statement said.

According to the statement, OPCW Director-General, Ambassador Ahmet Uzumcu, welcomed the move and said that it had closed an important chapter in the elimination of Syria's chemical arsenal.

A mission to eliminate Syria's chemical weapons was announced after a deadly gas attack that killed hundreds outside Damascus in August 2013.