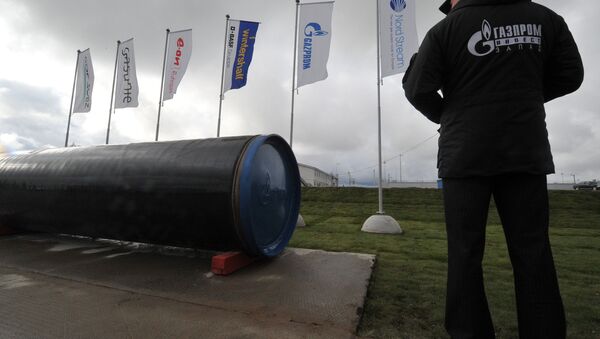 © Sputnik
/
Go to the photo bank
Subscribe
With the German government effectively brushing off pressures over the planned Nord Stream 2 pipeline with Russia, independent Russian newspaper Svobodnaya Pressa suggests that Washington is going to have to step up its game if it wants to see the project fail.

Merkel’s Office Tells Nord Stream 2 Opponents Gov’t Isn’t Against Gas Line
Resisting criticisms from several Eastern European countries, and pressures from lawmakers in her own Christian Democratic Union Party, Chancellor Angela Merkel's office recently issued a statement effectively telling critics to mind their own business, saying that the decision on whether or not to build the new Nord Stream 2 gas pipeline belongs to the German and Russian companies involved.

In response, Polish politicians suggested that Warsaw would do everything in its power to torpedo the project, Polish MEP Jacek Saryusz-Wolski noting that Poland would respond to this 'geopolitically dangerous' project with "a common front to counter its implementation."

A statement Monday by Foreign Minister Witold Waszczykowski appeared to indicate dissent among the ranks, or a policy reversal, with the minister suggesting that Poland would like to see future gas pipelines from Russia to Western Europe run through Polish territory.

In any case, with the Baltics, Poland and their patrons across the Atlantic dead set on challenging the Russian-German project, which is set to shift from the legal to the construction phrase in the near future, independent Russian newspaper Svobodnaya Pressa ponders how likely it is for the project to go ahead.

Warsaw Wants Nord Stream 2 Gas Pipeline to Run Through Poland
Speaking to the newspaper, Igor Yushkov, an analyst at the Moscow-based National Energy Security Fund, explained that generally, "the opponents of the Nord Stream 2 project can be divided into two camps. On the one hand are actors who are just working against Russia. They have nothing to gain or lose from a new pipeline being laid in the Baltic Sea, since they are not transit countries for Russian gas. These, first and foremost, are the Baltic states."

Then, there are the countries, including Poland and Ukraine, which stand to lose out on transit fees and a measure of geopolitical clout if Russia were able to rely on the Baltic Sea corridor to bypass Eastern Europe entirely and supply gas directly to Western Europe.

"Latvia and Poland," Yushkov notes, "are building LNG gas terminals and hope that in the future, a considerably part of the gas supplies coming to Western Europe from Norway and even the United States will come through them."

"This," however, "is expensive gas. We can see that practically-minded Germany has completed its calculations long ago, and does not make any statements about Nord Stream 2, surreptitiously attempting to [simply] implement the project. And the last word on whether the new natural gas project is approved or not belongs not to European officials, but to the German government – the country to whose territory the pipeline will travel."

In any case, according to Yushkov, "it's clear why Germany (and the whole of Western Europe, frankly) is interested in 'doubling' [the capacity of the existing] Nord Stream network. Northern Europe's own gas production is dropping significantly. Norway, the UK, the Netherlands and other countries cannot continue to extract gas supplies at the same levels they had previously. At the same time, Germany is looking to buy cheap gas from Russia, not LNG gas from the US or Norway."

Asked by the newspaper whether Nord Stream 2, which would double the existing Nord Stream pipeline's capacity of up to 55 billion cubic meters (equivalent to about 29% of all of Gazprom's exports in 2014) could free Russia from the need to use politically unfriendly Ukraine as a transit country, Yushkov noted that "this is a difficult question."

Bone of Contention: European Politicians at Odds Over Nord Stream 2
"On the one hand, the long-term contracts which we have signed require us to deliver gas to the Austrian hub. This, of course, can be done through the Nord Stream, bypassing Ukraine. However, this significantly increases the transit distance, leading to increased costs. Therefore, it is necessary, it seems, to renegotiate our gas contracts."

Ultimately, "the Russian leadership has put forth a clear task: to escape from a situation where there is no alternative to supplying Europe with gas without going through Ukraine. Nord Stream 2 will create such an alternative. At the same time, it will not be necessary to completely abandon transit through Ukraine."

In other words, Russia is looking to ensure that "at critical moments in relations between our countries, we will always be able to send gas along another route," Yushkov explained.

That Awkward Moment: Germany Trying to Bypass Anti-Russian Sanctions
With construction slated to begin this year, Svobodnaya Pressa asked the expert whether Nord Stream 2 could suffer the same fate of the abandoned South Stream.

"Actually, the situation with these pipelines is different. In the case of the first Nord Stream, Germany was interested in seeing the project implemented, and therefore it was. Berlin has acted very cleverly, and was one of the countries that opposed the South Stream. Its experts said that the pipeline would not correspond to Europe's energy strategy, and so on and so forth. At the same time, they themselves turned around and made an exception for the NEL pipeline, which gets its supplies from the North Stream, and bypasses the rules of the Third Energy Package," (an EU package of legislation designed to ban one company from owning both the pipeline and the gas flowing through it).

"In the case of South Stream," Yushkov noted, "there was no such lobby of strong governments. Therefore, Bulgaria was successfully pressured into rejecting the fulfillment of agreements it had already signed with Gazprom."

Asked why construction will take such a long time (with the project slated to be completed only in 2019), the analyst explained that ultimately, this is "not a matter of technical issues. In principle, it would be possible to finish the project in two years. But Berlin faces intense pressure from Washington, which does not want Germany to buy gas from Russia. I think the sanctions against Iran are being lifted precisely in order to say to the Europeans 'here is your alternative to Russian gas'."

In any case, Yushkov notes, the overall prospects for Russia in supplying gas to Europe are steady, in spite of the sharpened geopolitical situation surrounding the crisis in Ukraine. "I do not think that we will see any serious fiascos…So far, in spite of the numerous sanctions, the Europeans have not made a peep about gas. Russia, in turn, does not want to close the taps to its geopolitical opponents –Moscow doesn't want to give them any ammunition for accusations of 'energy blackmail'."

Is Washington Attempting to Torpedo Nord Stream 2?
"In recent years, Europe has tried to reduce its gas consumption. But in 2016 the situation could change. They may increase their purchase of Russian gas due to the fact that prices have fallen. Moreover, our [European] competitors' capabilities have been falling due to the depletion of existing deposits. Moreover, in 2016, Algeria, which is currently facing a growing political crisis, could 'explode'. Algeria is one of the major suppliers of energy resources to the European market. In such a case, the demand for Russian gas would inevitably increase."

For his part, commenting on Washington's reaction to the Nord Stream 2 project, Sergei Pravosudov, the general director of the Moscow-based National Energy Institute, explained that despite serious pressures from across the Atlantic against the Western Europeans, "Germany, the chief lobbyist in favor of the project, does not seem ready to give up. We will see which of them proves to be more persistent."

In any case, the analyst noted, "the Americans are not so much looking to prevent Russian gas from going to Europe, so much as they fear the economic, and resultant geopolitical convergence between Germany and Russia. For them this is the same kind of 'nightmare scenario' as an alliance between Russia and China."

Ultimately, Pravosudov too believes that Russian gas will continue to have good prospects on the European market in the near future. "Not so long ago, the Europeans attempted to shift from Russian gas to coal (most of it also Russian). This was done on the calculation that coal was cheaper. Now, the difference in price has been reduced, but gas is significantly more environmentally friendly. At the same time, in the new year, in accordance with EU environmental regulations, old coal plants will begin to close. Therefore, chances are that the purchase of Russian gas will grow."

000000
Popular comments
A statement Monday by Foreign Minister Witold Waszczykowski appeared to indicate dissent among the ranks, or a policy reversal, with the minister suggesting that Poland would like to see future gas pipelines from Russia to Western Europe to run through Polish territory. -- That wouldn't be any better than Ukraine, and maybe even worse.
jas
4 January 2016, 16:35 GMT
000000
jas, Can you imagine it. Poland have been whinging and whining since 1991 about how nasty Russia is and was. Now they believe they can demand Russian gas and for why? How did WWI and WWII start? How long did Poland manage to hold onto her independence (1919-1939) and what have they done since 1991? Besides overproduce apples and take their begging bowl to the EU?
anne00marie
4 January 2016, 16:44 GMT
000000
Newsfeed
0
New firstOld first
loader
LIVE
Заголовок открываемого материала
Access to the chat has been blocked for violating the rules . You will be able to participate again through:∞. If you do not agree with the blocking, please use the feedback form
The discussion is closed. You can participate in the discussion within 24 hours after the publication of the article.
To participate in the discussion
log in or register
loader
Chats
Заголовок открываемого материала
Worldwide
InternationalEnglishEnglishMundoEspañolSpanish
Europe
DeutschlandDeutschGermanFranceFrançaisFrenchΕλλάδαΕλληνικάGreekItaliaItalianoItalianČeská republikaČeštinaCzechPolskaPolskiPolishСрбиjаСрпскиSerbianLatvijaLatviešuLatvianLietuvaLietuviųLithuanianMoldovaMoldoveneascăMoldavianБеларусьБеларускiBelarusian
Transcaucasia
ԱրմենիաՀայերենArmenianАҧсныАҧсышәалаAbkhazХуссар ИрыстонИронауОssetianსაქართველოქართულიGeorgianAzərbaycanАzərbaycancaAzerbaijani
Middle East
Sputnik عربيArabicArabicTürkiyeTürkçeTurkishSputnik ایرانPersianPersianSputnik افغانستانDariDari
Central Asia
ҚазақстанҚазақ тіліKazakhКыргызстанКыргызчаKyrgyzOʻzbekistonЎзбекчаUzbekТоҷикистонТоҷикӣTajik
East & Southeast Asia
Việt NamTiếng ViệtVietnamese日本日本語Japanese俄罗斯卫星通讯社中文（简体）Chinese (simplified)俄罗斯卫星通讯社中文（繁体）Chinese (traditional)
South America
BrasilPortuguêsPortuguese
NewsfeedBreaking
07:30 GMTIndia: Uproar Over Arrest of BJP's Kirit Somaiya in Maharashtra For Accusing Minister of Corruption
07:10 GMTFinnish PM Embroiled in Product Placement Controversy Over Instagram Story
07:05 GMTFive People Killed as Gunman Opens Fire at Perm University in Russia
06:27 GMTCanada Set to Deliver Verdict in Testy Vote as PM’s Cakewalk Becomes Nail-Biter
06:17 GMTTaliban Order Women Working in Kabul to Stay at Home, Interim Mayor Says
06:12 GMTSweden Raises Taxes to Finance Largest Military Investment in Modern Times
06:01 GMTBoJo Vows UK’s ‘Ineradicable’ Love of France in Bid to Mend Fences Amid Diplomatic Row Over AUKUS
06:00 GMTBritain Considers Offering Loans to Energy Firms Amid Dramatic Hike in Gas Prices - Report
05:29 GMTRussia’s Ruling Party Ahead in Parliamentary Vote With Over 48%, Election Commission Says
04:34 GMTLive Updates: UK PM Johnson to Push Joe Biden to Lift COVID-19 Travel Ban With US
04:30 GMTNot in the Mood: Golden Retriever Does Not Want to Cuddle
04:28 GMTChinese Observers Give Positive Assessment of Russian State Duma Election
03:45 GMTMusk Adds Another Joke to Joe Biden’s ‘Sleepy’ Issue, When Asked About ‘Inspiration4’ Flight
03:16 GMTKhamenei Appoints New Head of Iranian Air Force
03:16 GMTWait, Again? New Photo of Trudeau Wearing Blackface Emerges on Social Media
02:41 GMT‘Duty of Care’: Texas Doctor Performs Abortion Past 6-Week Law to Protest State’s ‘Heartbeat Bill’
02:02 GMT'Get Off Back Foot': Prince Andrew Mulls Dismissing His Legal Team Over Reputational Damage - Report
01:48 GMT'The Crown' Wins Emmy for 2021 Best Drama Series
00:53 GMTWHO Appoints Former UK Prime Minister Gordon Brown as Health Financing Ambassador
00:45 GMTIran Says Ready to Sell Fuel to Lebanese Gov't After Hezbollah Secured Emergency Supplies - Report