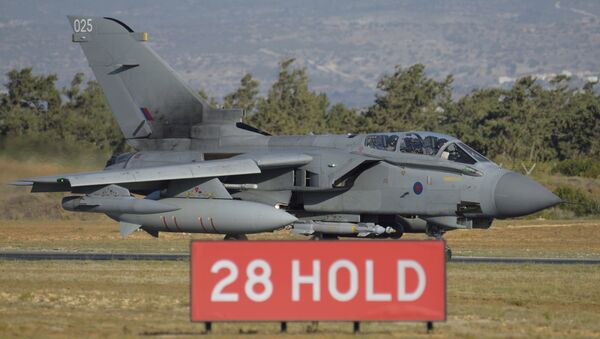 © AP Photo / Pavlos Vrionides
Subscribe
Britain’s Royal Air Force (RAF) has carried out a total of three manned airstrikes and one drone strike over the course of a month since lawmakers approved an anti-terrorist campaign in the Arab republic, local media sources revealed.

MOSCOW (Sputnik) – The December 2, 2015 vote to expand Britain’s anti-Islamic State (Daesh in Arabic) campaign from Iraq into Syria was preceded by heated debates over the post-war recovery and implications the airstrikes would have in the homeland.

The RAF’s Tornados and Typhoons mounted their third and last manned airstrike on December 6, according to The Telegraph. A fourth strike was carried out by a remote-controlled Reaper drone at a Daesh checkpoint in Raqqa on Christmas Day.

"Britain’s air campaign in Syria so far is basically a non-event which can have had little, if any, impact on the balance of power on the ground," military aviation expert Jon Lake was quoted as saying by the newspaper late Saturday.

'We Will Hit Them Harder': UK Set to Boost Anti-Daesh Operation in Syria
As few as 19 bombs were dropped by the RAF jets during the campaign, according to US Central Command figures cited by the publication.

The small scale of Britain’s foray into Syria as part of the US-led coalition seems to contradict Prime Minister David Cameron’s insistence prior to the parliamentary vote that the RAF would make a "meaningful difference" in the anti-Daesh campaign in the country.

"There is an almost complete disconnect between the heated political debate in Britain over Syria and what the Government has actually done," Lake maintained.

The newspaper cited the Defense Ministry as saying the RAF makes a more significant contribution in reconnaissance missions over Syria.

Suggestions that last month's vote to approve airstrikes in the crisis-torn country had more to do with politics are highlighted by reports that RAF jets are significantly more active in neighboring Iraq, where ground forces are regaining land from Daesh with British air cover.

000000
Popular comments
That's not a bad thing. NATO countries aren't capable of an honest effort in this, so the less they do, the better.
jas
3 January 2016, 09:41 GMT4
000000
Ha ha all that fight in the parliament to get it sanctioned for what??? 4 attacks, uh! It is really hard to fight against allies right?
3 January 2016, 09:15 GMT3
000000
Newsfeed
0
New firstOld first
loader
LIVE
Заголовок открываемого материала
Access to the chat has been blocked for violating the rules . You will be able to participate again through:∞. If you do not agree with the blocking, please use the feedback form
The discussion is closed. You can participate in the discussion within 24 hours after the publication of the article.
To participate in the discussion
log in or register
loader
Chats
Заголовок открываемого материала
Worldwide
InternationalEnglishEnglishMundoEspañolSpanish
Europe
DeutschlandDeutschGermanFranceFrançaisFrenchΕλλάδαΕλληνικάGreekItaliaItalianoItalianČeská republikaČeštinaCzechPolskaPolskiPolishСрбиjаСрпскиSerbianLatvijaLatviešuLatvianLietuvaLietuviųLithuanianMoldovaMoldoveneascăMoldavianБеларусьБеларускiBelarusian
Transcaucasia
ԱրմենիաՀայերենArmenianАҧсныАҧсышәалаAbkhazХуссар ИрыстонИронауОssetianსაქართველოქართულიGeorgianAzərbaycanАzərbaycancaAzerbaijani
Middle East
Sputnik عربيArabicArabicTürkiyeTürkçeTurkishSputnik ایرانPersianPersianSputnik افغانستانDariDari
Central Asia
ҚазақстанҚазақ тіліKazakhКыргызстанКыргызчаKyrgyzOʻzbekistonЎзбекчаUzbekТоҷикистонТоҷикӣTajik
East & Southeast Asia
Việt NamTiếng ViệtVietnamese日本日本語Japanese俄罗斯卫星通讯社中文（简体）Chinese (simplified)俄罗斯卫星通讯社中文（繁体）Chinese (traditional)
South America
BrasilPortuguêsPortuguese
NewsfeedBreaking
20:00 GMTLaschet, Scholz Want Coalition Talks to End by Christmas
19:41 GMTCIA Was Ready to Start Firefight in London to Prevent Russia From Busting Out Assange, Media Claims
19:20 GMTSuicide Pact? Top Labour Remainer Says Party Should Campaign to Rejoin EU
18:58 GMTVideo: Miss France 2019 Confronted by 'Teenage Gang' That Threw Stones at Her in Paris
18:47 GMTFree For All! Enraged Moped Drivers Fight in London Amid Lack of Fuel - Video
18:39 GMTPSG's Kylian Mbappe Caught on Camera 'Lamenting Neymar Would Not Give Him Passes'
18:35 GMTPowerful 5.7-Magnitude Earthquake Hits Philippines' Largest Island Luzon
18:00 GMTInfrastructure Plan: Pelosi Says She 'Never' Brings a Bill to Floor 'That Doesn't Have the Votes'
17:43 GMTUsyk vs. Fury? Gypsy King's Twitter Like Leaves Fans Buzzing About Possible Heavyweight Clash
16:50 GMTLabour Leader Demands Visas For 100K Foreign Lorry Drivers Amid Global Shortage
16:33 GMTLabour Staff Cuts That Prompted Strike Ballot Due to £2m-a-Year Legal Costs
16:23 GMTDHS Chief Reveals Up to 12,000 Haitians Who Crossed Southern Border Were Released Into US
16:21 GMTTurkey Wants US Military to Leave Syria, Iraq After Afghanistan Withdrawal, Erdogan Says
16:06 GMTSPD Leads in German Election Polls With 25.8% as Merkel's Bloc on Track for Worst Result Since 1949
15:59 GMTEx-Nazi Oberlander's Case Sets Precedent for Holding War Criminals to Account in Canada
15:45 GMTFive Palestinians Reported Killed in Israeli Anti-Hamas Operation
15:38 GMTSpain's La Palma Airport Reopens After Brief Pause Over Volcanic Activity
15:37 GMTAustralian Cyclist Recreates Baby From Nirvana's Nevermind Cover Using GPS and City Streets
15:10 GMTSan Marino to Decide Whether to Lift Ban on Abortions
14:52 GMT'Whipping' Story is Attempt to Divert Public Opinion From Biden's Political Failures, Observers Say