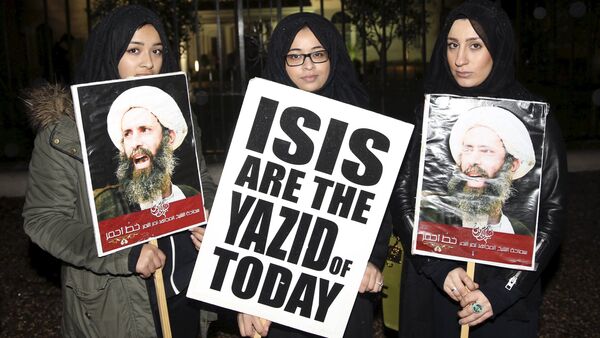 The killing of a prominent Shia cleric, Nimr al-Nimr, a vocal critic of Saudi Arabia’s ruling Sunni royal family, sparked outrage and a serious escalation of diplomatic tensions in the region, but only a cautious criticism of Saudi Arabia’s close allies, the US and the EU.

The execution of a prominent Shiite cleric, one of the 47 people killed on Saturday in what comes as Saudi Arabia’s biggest mass execution in decades, has stirred real anger in the region.

​The most vocal critic of the kingdom was its Shi'ite rival to the north, Iran. Iran's Supreme Leader Ayatollah Khamenei warned Saudi Arabia on Sunday of imminent divine revenge.

A former prime minister of another neighbor of the kingdom, Iraq, Nouri al-Maliki condemned the execution, pledging that the act would bring down the Saudi rulers.

Iraq's al-Maliki 'Reaffirms' Saudi Arabia Will Be Destroyed
Saudi Arabia’s close allies, US and EU, however were more cautious in their criticism of the killing.

The US has expressed concern, warning that it may provoke sectarian violence.

"We are particularly concerned that the execution of prominent Shia cleric and political activist Nimr al-Nimr risks exacerbating sectarian tensions at a time when they urgently need to be reduced," Kirby said in a statement late Saturday.

Kirby said Washington has "frequently" raised concerns about the legal process in Saudi Arabia at high-level meetings, and urged Riyadh to permit the peaceful expression of dissent. He added that the Saudi government needs to work with community leaders to defuse tensions in the wake of the executions.

Execution of Shiite Cleric in Saudi Could Prompt Sectarian Tensions - US
"In this context, we reiterate the need for leaders throughout the region to redouble efforts aimed at de-escalating regional tensions," the spokesman stressed.

EU foreign policy chief Federica Mogherini said on Saturday that the specific case of Sheikh Nimr raises serious concern about freedom of expression and the respect of basic civil and political rights “also in the framework of the fight against terrorism.”

She warned that the case has the potential of sparking “further the sectarian tensions that already bring so much damage to the entire region, with dangerous consequences.”

Protesters Storm Saudi Embassy Building in Tehran
UN Secretary-General Ban Ki-moon also voiced his dismay over the execution of Nimr and called for calm and restraint.

German officials have expressed concern over the further mounting of tensions in the region.

“The execution of Nimr al-Nimr strengthens our existing concerns about increasing tensions and deepening rifts in the region,” the German media quotes a German Foreign Ministry official, without revealing his name, as saying on Saturday, hours after Riyadh announced the execution of Sheikh Nimr along with 46 others for terrorism-related charges.

Execution of Shiite Cleric in Saudi Arabia Sparks Protests in Bahrain
The German official reiterated Germany’s previous positions regarding Saudi Arabia’s repeated cases of executions, saying Berlin is still of the view that death penalty is an inhumane form of punishment.

Human Rights Watch and one British human rights defender condemned the executions, describing them as “the most serious crime imaginable”.

Nimr's execution would mark the start of a new wave of protests in Saudi Arabia. #NimrBloodEndsKSA pic.twitter.com/XKcjb45oXf

​The simultaneous execution of 47 people — 45 Saudis, one Egyptian and a man from Chad — was the biggest mass execution for security offences in Saudi Arabia since the 1980 killing of 63 jihadist rebels who seized Mecca's Grand Mosque in 1979.

Most of the 47, 43, were Sunnis convicted of al Qaeda attacks in Saudi Arabia a decade ago. Four, including Nimr, were Shi'ites accused of involvement in the shooting of policemen.

The executions took place in 12 cities; four prisons used firing squads and the others beheaded the convicts.