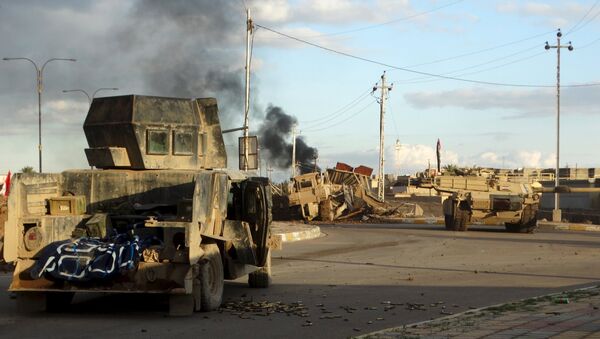 © REUTERS / Stringer
Subscribe
Commander of Iraq's anti-terrorism contingent said that Parts of the Iraqi city of Ramadi, remaining under the control of the Daesh should be fully liberated in four to five days.

"Few areas of Ramadi are still controlled by Daesh, they will soon be liberated. We will establish full control over Ramadi in four to five days," Asadi said.

According to the commander, after Ramadi is freed from Daesh militants, the Iraqi army will start liberating the city of Fallujah in the Anbar province. The Iraqi army will also need to receive the corresponding order from Supreme Commander Haider Abadi, the country’s prime minister, to proceed with the operation in Fallujah, Asadi added.

"The area surrounding Fallujah is under siege, which allows for attacks on the Daesh militants there," Asadi said.

Ramadi has been occupied by Daesh, an organization outlawed in many countries including Russia, since May.

The Iraqi army announced on Monday it had regained full control over the western Iraqi city. The Anbar province authorities and US State Secretary John Kerry later clarified that Ramadi had not yet been fully reclaimed.

Fallujah, located 42 miles west of the Iraqi capital Baghdad, is one of the largest cities in the Anbar province. In mid-July, Iraqi troops launched a major offensive to liberate Fallujah, as well as Ramadi, from IS militants.