Guess Who Railed Against : ‘State Terror Against Kurds’ in ‘Kurdistan’ 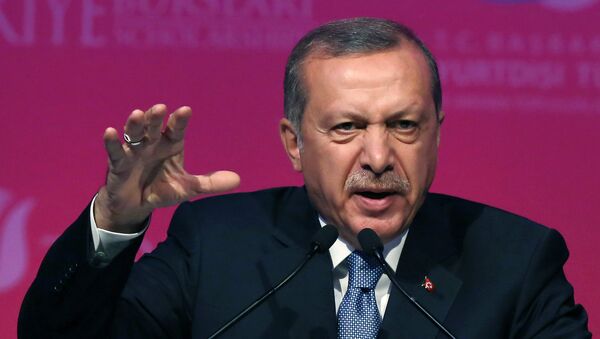 © AP Photo / Burhan Ozbilici
Subscribe
Inconsistency is common in politicians, who one day decry ‘state terror’ against citizens and some two decades later send tanks against those same people to ‘impose curfews’.

Meet the Sultan of Civil War
A report published in a Turkish daily newspaper demonstrates the dramatic change in the stated political policy of Recep Tayyip Erdogan since 1991.

The Hurriet published passages from a 90-page report on the “Kurdish issue,” composed by Erdogan while he was an official with the conservative Islamist Refah (Welfare) party in his hometown of Istanbul.

In the report, requested by his party’s leadership, Erdogan clearly denounced Turkish military operations in the Kurdish southeast, referring to them as acts of “state terror” against “Kurdish people.”

Erdogan, at the time, wrote that because “the Kurdish issue” is a “national question,” the correct way to resolve it is “by recognizing Kurdish language as an independent language and which has no relations to the Turkish language.”

But by 2016, some 25 years later and with Erdogan as the boss, Kurds are not necessarily forbidden to learn their mother tongue, but several letters of the Kurdish alphabet are outlawed in Turkey and the number of schools providing education in Kurdish and other minority languages is very small.

​“What is called ‘the Southeastern issue’ is, in essence, the Kurdish question, which is no doubt a national question. These areas, which are labeled as Southeast, have since the dawn of history been called Kurdistan,” Erdogan said in 1991. “This region has suffered twice, from PKK assaults since 1985 and at the same time it has been subjected to state terror which has targeted the population for allegedly supporting the PKK.”

In 2016, as the president of the Turkish Republic and playing a nationalist card, Recep Tayyip Erdogan is singing a different song.

“You will be annihilated in those houses, those buildings, those ditches which you have dug,” Erdogan has pronounced recently, referring to trenches created by Kurdish fighters in many southeastern cities. “Our security forces will continue this fight until it has been completely cleansed and a peaceful atmosphere established.”

Besieged Kurdish Towns Under Heavy Bombardment by Turkish Army
Many politicians and experts worldwide have described Erdogan’s ongoing military operation against Kurds as “state terror,” a comparison not lost on students of recent Turkish political history.

Some 200 civilians have been killed during recent blockades and attacks by Turkish government forces. Over 100,000 people have reportedly been displaced in ongoing military actions in Turkey’s majority-Kurdish southeast.

Why Turkey Remains Indifferent Over State Violence Against Kurds
Severe clashes between Ankara forces and the Kurdistan Worker’s Party (PKK), alongside popular resistance units, have arisen since a July terror attack in the city of Suruc which killed over 30 people, most of them Kurds. After Kurds killed two Turkish policemen they claimed were affiliated with Daesh soon after the attack, Ankara launched a military campaign against PKK and self-defense units. The clashes intensified in December 2015 in the southeastern city of Diyarbakir, with curfews imposed in numerous Kurdish areas across the southeast.
000000
Popular comments
but several letters of the Kurdish alphabet are outlawed in Turkey It is beyond me how some societies or shall I say governments are so medievally backward, like the Gollum government is. How can you ban a letter or two of an alphabet? LOL Obsessive manic psychopaths!
3 January 2016, 07:50 GMT4
000000
They would ban all Adam Sandler's films, I bet my house on it :)
3 January 2016, 07:51 GMT2
000000
Newsfeed
0
New firstOld first
loader
LIVE
Заголовок открываемого материала
Access to the chat has been blocked for violating the rules . You will be able to participate again through:∞. If you do not agree with the blocking, please use the feedback form
The discussion is closed. You can participate in the discussion within 24 hours after the publication of the article.
To participate in the discussion
log in or register
loader
Chats
Заголовок открываемого материала
Worldwide
InternationalEnglishEnglishMundoEspañolSpanish
Europe
DeutschlandDeutschGermanFranceFrançaisFrenchΕλλάδαΕλληνικάGreekItaliaItalianoItalianČeská republikaČeštinaCzechPolskaPolskiPolishСрбиjаСрпскиSerbianLatvijaLatviešuLatvianLietuvaLietuviųLithuanianMoldovaMoldoveneascăMoldavianБеларусьБеларускiBelarusian
Transcaucasia
ԱրմենիաՀայերենArmenianАҧсныАҧсышәалаAbkhazХуссар ИрыстонИронауОssetianსაქართველოქართულიGeorgianAzərbaycanАzərbaycancaAzerbaijani
Middle East
Sputnik عربيArabicArabicTürkiyeTürkçeTurkishSputnik ایرانPersianPersianSputnik افغانستانDariDari
Central Asia
ҚазақстанҚазақ тіліKazakhКыргызстанКыргызчаKyrgyzOʻzbekistonЎзбекчаUzbekТоҷикистонТоҷикӣTajik
East & Southeast Asia
Việt NamTiếng ViệtVietnamese日本日本語Japanese俄罗斯卫星通讯社中文（简体）Chinese (simplified)俄罗斯卫星通讯社中文（繁体）Chinese (traditional)
South America
BrasilPortuguêsPortuguese
NewsfeedBreaking
12:25 GMTOne Cable to Rule Them All: EU to Demand Use of Common Charger for Smartphones by 2024
12:19 GMTEcoHealth Alliance, DARPA Toyed With Infecting Wild Chinese Bats With Covid, Leaked Docs Allege
12:17 GMTCristiano Ronaldo's Return to Manchester United Makes Him World's Highest-Paid Footballer
12:11 GMTUS House Passes Bill Compensating 'Victims' of Enigmatic 'Havana Syndrome'
12:07 GMTMacron, Biden to Hold Talks on Wednesday to Clarify Details of Australia's Decision on Submarines
11:57 GMTSudanese Authorities Lack Mandate to Sign Naval Base Agreement With Russia, Minister Says
11:44 GMTCanada Unlikely to See Another Snap Vote After Trudeau's Failed Bid to Win Majority
11:26 GMTBiblical Story of Sodom Likely Inspired by 'Cosmic Airburst' Bigger Than Tunguska Blast, Study Says
11:10 GMTUS 'Era of War Over'?
11:07 GMTPandemic Times: India's Healthcare Adopts Cloud Computing, 12 Mln Consultations Clocked
10:55 GMTAll Participants of Sudan Coup Detained, Will Stand Trial, Deputy Foreign Minister Says
10:51 GMTDonald Trump Sues NYT, Niece Mary Over ‘Insidious Plot’ Behind 2018 ‘Dubious Tax Schemes’ Story
10:48 GMTDriver of Zelensky's Aide Shefir Undergoing Leg Surgery, Report Says
10:34 GMTKremlin Regrets Erdogan's Claims About Crimea's 'Annexation' on Eve of Sochi Summit
10:18 GMTThe Truckers' Friend: UK Transport Secretary Takes Action to Protect M25 Motorway From Demonstrators
10:15 GMTStrong 6.5-Magnitude Earthquake Strikes Near Coast of Nicaragua
10:14 GMTHollywood Bids Farewell to Sex and the City Star, Dead at Age 57
09:58 GMTRussian An-26 Plane With 6 People Onboard Disappears From Radar in Khabarovsk Region
09:49 GMT'Hardest Decision of My Life': Uma Thurman Opens Up About Her 'Darkest Secret'
09:18 GMTZuckerberg Reportedly Approved Using News Feed to Push Pro-Facebook Coverage in Image-Reshaping Bid