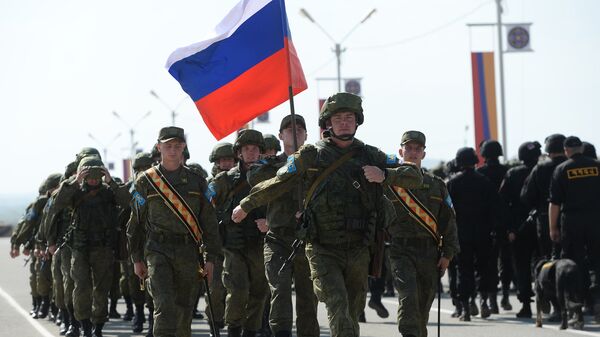 On the very last day of 2015, President Putin signed Russia’s National Security Strategy for 2016, updating the existing strategic planning document, which established the country’s national priorities until 2020. Here are the major points of the new edition.

Russia
Putin Orders Changes in Russia's National Security Strategy
“The Strategy is a key strategic planning document that establishes the national interests and strategic national priorities of the Russian Federation, and home and foreign policy goals, targets and measures directed at strengthening national security and ensuring the country’s stable long-term development,” the very first paragraph of the General Provisions states.

The National Security Strategy until 2020, which was approved by the president back in 2009, was a rather short list of priorities and apparently needed an update due to the changing environment Russia has found itself in.

Here are the major points of the new edition.

Russia in the Modern World

The document acknowledges that the strengthening of Russia, its independent foreign and internal policy prompts the US and its allies to initiate counteraction, as they are striving to maintain their dominant position in the world. Thus they pursue a policy of constrain of Russia, which envisages exerting political, economic, military and information pressure.

Russia
Russia Outlines Priorities in Relations with US, EU and NATO
Therefore, Russia’s national priority is consolidating its position as one of the leading world powers.  The country’s long-term national interests are: “…consolidating the Russian Federation’s status as one of the leading world powers, whose actions are aimed at ensuring strategic stability and mutually beneficial partnerships in the context of a multi-polar world,” the document states.

When it comes to national priorities, it emphasizes strengthening the country’s defenses, protecting its constitutional system, sovereignty and territorial integrity, strengthening the national consensus, raising the quality of life, preserving and developing culture, improving economic competitiveness, and other principles of national security.

Strategic tasks listed in the document include ensuring food security through “ensuring Russia’s food independence.” In addition, it calls for the accelerated development of Russia’s agriculture, increasing the effectiveness of government support for agribusiness, preventing the uncontrolled traffic of GMO foods, and also training highly prepared specialists for the agricultural sector.

“The process of forming a new polycentric world order is accompanied by a rise in global and regional instability. Conflicts are escalating due to the uneven global development and the growing differences between various countries’ levels of well-being, the struggle over resources and market access, [and] control over trade routes,” the Strategy states. “Competition between states is being extended to values and societal development models, human, technological, and scientific potential.”

“The struggle for influence in the international arena involves the whole range of political, financial/economic, and information instruments. The potential of secret services is being utilized more actively,” the document notes.

Role of Force, Relations With NATO and Block Approach

US Builds New MidEast Order to Keep Its Leading Position in the World
The document acknowledges that the role of force continues to dominate in the international relationship. The strive to increase and modernize the offensive weapons only weakens the global security system and the system of international treaties and agreements on arms control.

The principles of equal and indivisible security are not being observed in the Euro-Atlantic, Eurasian and Asia-Pacific regions.

The expansion of NATO and its approach to Russia’s borders has created a threat to national security.

“Expanding the force potential of NATO and endowing it with global functions which are implemented in violation of international legal norms, the block’s military activation, its continued expansion, and the approach of its military infrastructure to Russian borders, all create a threat to national security.”

The instigation of “color revolutions” is one of the main threats to Russia’s security, the document states.  The regions neighboring Russia are characterized by growing militarization and arms races.

The most important threats to Russia’s state and societal security are “the activity of radical societal groups and organizations which are using nationalist and extremist religious ideology, of foreign and international NGOs and financial and economic organizations, as well as private individuals, aimed at undermining the unity and territorial integrity of the Russian Federation, destabilizing the political and social situation inside the country, including through inspiring ‘color revolutions’ and destroying traditional Russian spiritual and moral values.”

The document notes that the practice of overthrowing legitimate political authorities is becoming more widespread.

“The practice of overthrowing legitimate political authorities, provoking internal instability and conflict, is becoming more widespread. In addition to the still-existing areas of instability in the Middle and Far East, in Africa, South Asia, and the Korean Peninsula, new “hot spots” have appeared and the territory not controlled by any government authority has expanded.

The US Military-Biological Lab Network

The document states that the US is expanding its network of military-biological laboratories on the territory of countries neighboring Russia. The world still faces a high risk of proliferation and use of chemical weapons, “and also the uncertainty as to which foreign countries have biological weaponry or the means to develop and produce it.”

There is also the danger that the number of nuclear weapons states will increase. Politically unstable countries run a high risk of seeing conventional weapons fall into terrorist hands, and the “physical protection of dangerous objects and materials” is in a critical state.

The Strategy blames the US and EU for supporting the 2014 Euromaidan coup.

“US and EU support for the anti-constitutional coup d’etat in Ukraine led to a deep schism in the Ukrainian society and an armed conflict.”

The document notes that the West’s effort to counter the integration processes and to create hot spots in the Eurasian region is having a negative influence on Russia’s pursuit of its national interests.

“The consolidation of an extreme right nationalist ideology, the deliberate effort to create a public image of Russia as an enemy…is turning Ukraine into a long-term source of European instability located right next to Russia’s borders,” the document emphasizes.