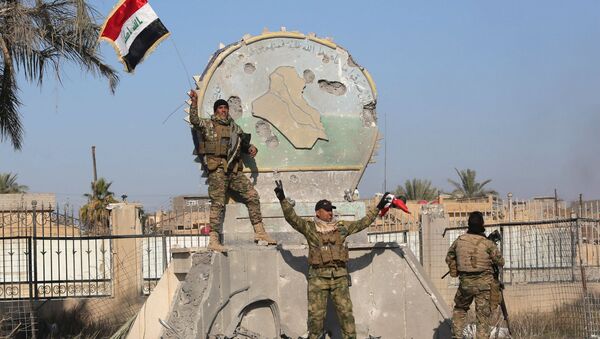 Late last month, the Iraqi army entered Ramadi, the capital of western Iraq's Anbar province and one of Daesh's key strongholds in the country. However, as The National Interest contributor Christopher Preble explains, not everyone is happy about Iraq's success.

The last weeks of 2015 witnessed an important turning point in the Iraqi army's struggle against Daesh (ISIL/ISIS) terrorists in western Iraq, with officials announcing late last month that they were on course to completely liberate Ramadi, a city in central Iraq which had been occupied by Daesh militants since May.

But paradoxically, the joyous victory against the terrorist group and its self-declared caliphate, which has brought misery to millions and condemnation from around the globe, wasn't as joyously met by some commentators and policy experts in Washington, who treated the victory as if it was a lump of Christmas coal.

Over 22,000 Iraqis Killed, Injured in 2015 in Acts of Violence
In his recent article for Washington-based foreign affairs magazine The National Interest, Cato Institute expert Christopher Preble wrote that "the recapture of Ramadi is certainly good news, and may signal a shift on the ground that will allow the Iraqi government to press on against other [Daesh] strongholds, including Fallujah and Mosul."

This is certainly what the Iraqi Prime Minister Haidar Abadi intends to see happen, recently vowing that "2016 will be the year of the big and final victory, when Daesh's presence in Iraq will be terminated."

Unfortunately, Preble notes, "if you listen closely, however, you might notice a tinge of disappointment among some here in Washington."

"Few will be as blunt as James Poulos in The Week, who focused on 'The Bad News about ISIS's Defeat in Ramadi,' but the Iraqi government's apparent success challenges some of the hawks' most deeply held beliefs about US foreign policy."

The heart of the matter, the journalist argues, is that US interventionists' "worldview hinges on the argument that Iraqis and others in the region can't be trusted to take ownership of their security. Thus, the need for more US troops in both Iraq and Syria. According to some, many more US troops are required." Now, "the Iraqi government's clear progress over the past few months seriously challenges the claim that the US military is the only force capable of containing and ultimately defeating [Daesh]."

Final Countdown: Iraqi PM Says 2016 Will See Fall of Daesh
America's presence in Iraq, ostensibly aimed at ensuring security, hasn't been without an element of coercion, the journalist admits. Moreover, "unsurprisingly, relations between Washington and Baghdad have been consistently rocky," from US pressures to restructure the country's political system and the economy, to Washington's vain and unconvincing attempts to promote a Sunni-Shia reconciliation, to its effort to secure an agreement allowing US troops to remain in the country after 2011.

"The pattern of resistance, confrontation and defiance," Preble suggests, "calls into question the many claims that an extended US military presence would have altered Iraqi politics and forestalled the rise of [Daesh] in the first place."

Therefore, the journalist suggests, "it's well past time" for Iraq to prove that it is capable of defending itself. Moreover, "officials in the Obama administration, much as they might like to push back against their many critics, should not make this out as an American victory. While US support helped, it is the Iraqis who deserve the credit for the hard fighting on the ground. And it is the Iraqis who will likewise be chiefly responsible for removing the rest of the [Daesh] cancer from their territory."