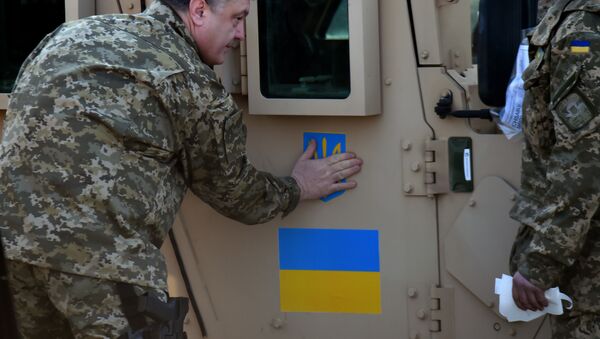 The leaders of the Normandy Quartet (Ukraine, Russia, Germany and France) recently agreed to extend the implementation of the Minsk accords, drafted to restore peace in eastern Ukraine, into 2016. What does the extension mean, what are its prospects, and why do authorities in Kiev seem to have such a hard time fulfilling their obligations?

On December 30, the leaders of the so-called Normandy Quartet on Ukrainian Reconciliation spoke by phone, agreeing to extend the Minsk agreements on the settlement of the conflict in Donbass, which expired on December 31, for another year.

"The leaders stressed a crucial need for strict compliance with the ceasefire regime along the contact line in Donbass," a statement regarding the talks published on the Russian president's website reads.

Normandy Four Leaders Reaffirm Commitment to Ceasefire in Donbass
"This would create the preconditions for implementing tasks that would secure the advancement of a political settlement. It was agreed, in particular, to intensify discussions in the Contact Group on the speedy development and adoption of the law on local elections in some districts of Donetsk and Lugansk regions," the statement added.

The telephone conversation, it was reported, also led to agreement that the four countries' foreign ministers should meet later this month or early next month to conduct "a thorough appraisal of the implementation" of the peace plan. The 13-point 'Minsk II' peace deal, aimed at ending the bloody civil conflict in eastern Ukraine which began in April 2014, was signed in Minsk, Belarus on February 12, 1015. The plan called for the withdrawal of heavy weapons, prisoner exchanges, and, crucially, special status for the rebel-held portions of Donetsk and Lugansk, which may be achieved via constitutional reforms aimed at decentralization.

Almost 4,000 Civilians Killed in DPR Since Start of Ukrainian Conflict
Despite nearly a year having passed  since the agreement's signing, no more than a few of the 13 points can be considered to have been fulfilled, and often times only partially. Even a complete and lasting ceasefire has not been achieved, although the use of heavy artillery has been reduced significantly. An agreement on the freeing of hostages and illegally held persons has also proven unattainable.

Among Minsk II's main stumbling blocks are the points on the search for a political settlement, specifically the prospects for local elections in the self-declared Donetsk and Lugansk republics. Negotiations "on modalities of conducting local elections," conducted within the framework of the political sub-group of the Contact Group, have resulted in deadlock, with elections previously set for October and since carried over to February looking more and more unlikely to take place.

"The situation," independent Russian newspaper Svobodnaya Pressa writes, "is even worse when it comes to the introduction of amendments to Ukraine's constitution aimed at the decentralization of power. In late August, Ukraine's parliament adopted, not without scandal, President Poroshenko's draft project on constitutional reform. Since then, lawmakers have not returned to the issue, despite the support for the project expressed by the US and the EU."

"In fact," the paper suggests, "the chances of the bill passing in the second reading are exactly zero: it must find the support of at least 300 MPs, at a moment when the ruling coalition in Kiev is more and more split."

Shelling of OSCE Mission Shows Kiev’s Reluctance to Stick to Minsk Deal
The breakaway Donbass republics, for their part, have also voiced their dissatisfaction with Poroshenko's proposed amendments, given that they were proposed without their participation.

Unfortunately, the paper worryingly suggests, "Minsk 2 has come to an impasse. And today, many observers suggest that the result will be the resumption of fighting in the Donbass."

Speaking to the newspaper, Rostislav Ischenko, a Ukrainian political expert and president of the Center for Systems Analysis and Forecasting, recalled that "talk on the inevitable resumption of hostilities in the Donbass has been heard since the Minsk II agreement was first reached."

The reality, the analyst suggests, "is not so much that Minsk II is at an impasse, but that the Minsk agreements were from the beginning simply not feasible for Ukrainian authorities. The fact is that if they were implemented, the current Ukrainian government would lose control of the country, and would have to leave office."

"Furthermore," Ischenko recalls, "Ukraine is home to [ultranationalist 'territorial defense'] battalions, which in the case of the implementation of the Minsk Agreements will be guaranteed to find themselves in prison or in the grave. It's clear that they too are doing everything they can to ensure that the agreements are not met – and this is a force consisting of tens of thousands of armed men."

Asked why the agreement was signed, if Kiev had no intention of fulfilling it, the expert explained that Ukrainian leaders "had expected that they would be allowed not to fulfill Minsk II, while Russia would be pressured to do so. But it soon became clear that everything had turned out in a completely different way, and from that moment Ukrainian authorities have been looking for ways to disrupt the agreements."

Ukrainian MP Sings 'Adolf Hitler in Each of Us' on Eve of Nazi March
"For the moment, they have not managed to derail the agreement, since it can be done only in one way – to resume hostilities in the Donbass. But Poroshenko is not ready to take such responsibility onto his shoulders because he understands that in this situation he would become an enemy not only to Putin, but to Merkel and Hollande as well, and this is something that Poroshenko openly fears."

As a result, the analyst suggests, "the process has been drawn out. Ukraine also has rougher politicians, and more dysfunctional ones – who would have [re]started the war a long time ago. But Poroshenko is postponing the decision to the last moment. For him, the resumption of war in the Donbass is the last trump card – one which he can play only when the situation in the country becomes impossible for the authorities to control."

"All of this is quite possible," the political scientist warns. "Ukraine, as we all know, is full of internal contradictions: Poroshenko fights with [Prime Minister] Arseniy Yatsenyuk, [Dnipropetrovsk oligarch] Ihor Kolomoisky fights 'against all', and [disgraced former Georgian president] Mikheil Saakashvili has ambitions to control more than just the Odessa region."

Terror in Southern Ukraine Forcing Residents to Take Up Arms
"Moreover, there are internal contradictions among the [ultranationalist] battalions – plus friction between them and the populace which they have been plundering. In the Kherson region, for example, locals are already creating their own self-defense units."

"As things stand," Ischenko notes, "Kiev already has little control over the country. And when the loss of control becomes fraught with the prospect of a coup d'état, and ground starts to crumble beneath the authorities' feet, Poroshenko will play his last trump card – beginning a war in the east."

In any case, the analyst suggests, "everyone understands that the outbreak of war would result in the rapid defeat of Ukraine. Poroshenko also fears this – such a scenario threatens his authority, and his personal well-being. Nevertheless, war for him is his last chance. Therefore, so long as it remains possible to hang on to power without war, Poroshenko will stall. As soon as it becomes clear that preserving peace without war is impossible, Poroshenko will authorize military action – or it will start without him."

Moscow Achieves the Unthinkable, Catching Kiev in a 'Peace Trap'
Bogdan Bezpalko, the deputy director of the Center for Ukrainian and Belarussian Studies at Moscow State University, is only slightly more optimistic in his assessment: "the extension of Minsk II offers a glimmer of hope for the preservation of the current status quo for the 'frozen' conflict in the Donbass," he says.

The two sides, the analyst notes, "have managed to avoid collisions along a broad front using heavy weapons and rocket artillery. The Normandy Quartet, it is apparent, hopes that this situation will continue for some time, and that the Herculean efforts by everyone who pressed Poroshenko toward peace will not be in vain."

Unfortunately, Bezpalko explains, "the conditions under which the Ukrainian president has found himself are pushing him toward the continuation of the armed conflict…For Ukraine, the violation of the Minsk II and an attempt to advance in the east are seen as a way out of the impasse in which the country has found itself."

"Ukraine is in a state of economic degradation. The country has just adopted a budget accounting for the demands of the IMF, which Ukrainian lawmakers themselves have called a 'genocidal budget', and which has already caused unrest among the country's farmers." Moreover, "due to the entry into force on January 1, 2016 of the free trade zone between Ukraine and the European Union, Russia has closed its markets to Ukrainian goods. Against this background, Washington, through the IMF, has made demands for a large-scale privatization of Ukrainian state assets, and drastic cuts in social expenditures."

"All of this," the analyst notes, "could trigger a social explosion." In this situation, "Kiev could see the resumption of war in Donbass as the only way out of the situation. Obviously, in this case authorities will try to blame Moscow for disrupting Minsk II."

"Nevertheless," Bezpalko concludes, "the hope that the status quo will continue in 2016 has not yet been extinguished completely."