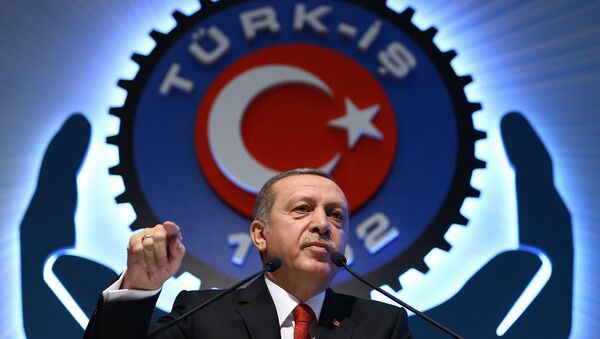 © AP Photo / Murat Cetinmuhurdar, Presidential Press Service
Subscribe
International
India
Africa
The Crimean War was one of the most absurd conflicts in modern history, according to geopolitical expert F. William Engdahl; however, the escalating conflict being incited by Turkey’s would-be new Sultan, Recep Erdogan, by provoking Russia again and again, is more of a farce, he said, recalling Karl Marx’s remark on how tragedies repeat themselves.

“As if it weren’t enough to satisfy his macho by shooting down a Russian Su-24 fighter jet in Syrian airspace, an act of war by a NATO country, and murdering the Russian pilot, using his Turkish Grey Wolves terrorists, in violation of every precept of civilized nations, now the hot-headed Erdogan is openly stirring conflict in the Russian region of Crimea,” F. William Engdahl writes in his article for the magazine New Eastern Outlook.

Are Erdogan's Grey Wolves Terrorists Knocking on Crimea's Door?
The expert illustrates the above statement with the recent meeting of the Turkish leader with the “two organizers of the recent blockade actions against food and electricity that have been launched against the citizens of Russian Crimea.”

Another illustration is that Erdogan is also “sending the ultra-right-wing Turkish nationalist terrorist Grey Wolves into Ukraine to team up with Ankara-backed Crimean Muslim Tatar terrorists.”

The expert warns that “Erdogan’s ambitions are not modest. If he is mad enough to persist, as he seems so far to be, backed by Saudi and Qatari billions and his mad obsession with creating a new Ottoman Sultanate, he could detonate a new world war.”

That is, he stresses, “unless the more civilized world finally tires of his Monty Python-esque megalomania,” referring to the 1975 comedy classic “Monty Python and the Holy Grail”.

F. William Engdahl then warned that, if unleashed, the new conflict will be more of a farce than a tragedy, referring to the first line of an essay Karl Marx wrote in 1852.

Erdogan: Turkey Will Not Recognize Crimea's Reunification With Russia
Describing France of the time of Napoleon III, Marx, referred respectively to Napoleon I and to his nephew Louis Napoleon (Napoleon III).

“Hegel remarks somewhere that all great world-historic facts and personages appear, so to speak, twice,” Marx wrote in his essay. “He forgot to add: the first time as tragedy, the second time as farce.”

F. William Engdahl echoed his words, adding that “this third time, it is Erdoğan, not as Napoleon III, but as Monty Python and the Holy Grail.”