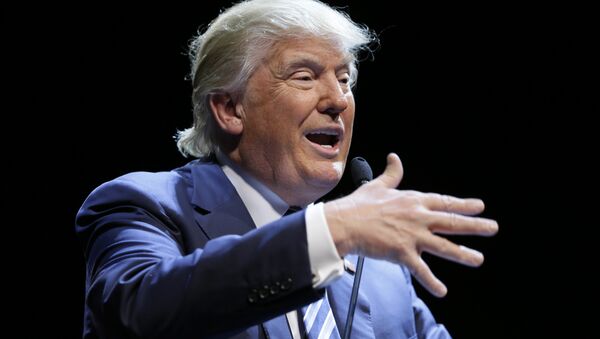 It’s not good news for US Republican Presidential Candidate Donald Trump should he want to pay Britain a visit. The campaign to ban Donald Trump from entering the UK has provoked a response from the Home Office.

UK Petition to Ban US Republican Trumps 400,000 Signatures
An official government statement has indicated that the Home Secretary Theresa May could be prepared to ban Donald Trump from the UK over his “divisive” comments about Muslims.

A petition to ban Trump on hate speech grounds has surpassed half a million signatures – five times more than is needed for MPs to consider debating the issue.

“The signatories believe Donald J Trump should be banned from UK entry for his continued, unrepentant hate speech and unacceptable behavior.

“His unacceptable behavior is well documented, and we feel it foments racial, religious and nationalistic intolerance which should not be welcome in the UK”, the petition states.

Indeed his comments have been well documented and range from calling all Mexicans “murderers and rapists” to mocking women, refugees and disabled people and suggesting that the “US should ban all Muslims from entering the country”.

In the UK, to #trump means to fart. So If that unstable balloon animal actually wins the US presidency, that's 4 years of awesome news puns!

Trump also managed to rile London Mayor Boris Johnson when he suggested areas of London were “no go areas” for police officers because they were controlled by Islamist extremists.

Responding to Mr. Trump’s claims, London Mayor Boris Johnson told reporters, “I think Donald Trump is clearly out of his mind”, and said his ignorance made him unfit to be US President.

Donald Trump 'Tragic' and His Words Risk Further Radicalization - Malala
London’s Metropolitan Police Service told the capital’s newspaper, Evening Standard: “We would not normally dignify such comments with a response, however on this occasion we think it’s important to state to Londoners that Mr Trump could not be more wrong”.

And now Home Secretary Theresa May is listening and has issued a statement indicating that Trump could be stopped from entering British soil.

The statement said: “The Home Secretary has said that coming to the UK is a privilege and not a right and she will continue to use the powers available to prevent from entering the UK those who seek to harm our society and who do not share our basic values”.

Mrs May considers Trump’s comments to be “divisive, unhelpful and wrong” but the statement added that the government did not comment on individual exclusion cases.

This petition to ban Trump from the UK will allow him to cast himself as a free speech martyr. That’s a gift to him. https://t.co/QczMOBINEz