Vladimir Putin is 'Person of the Year' – French Media 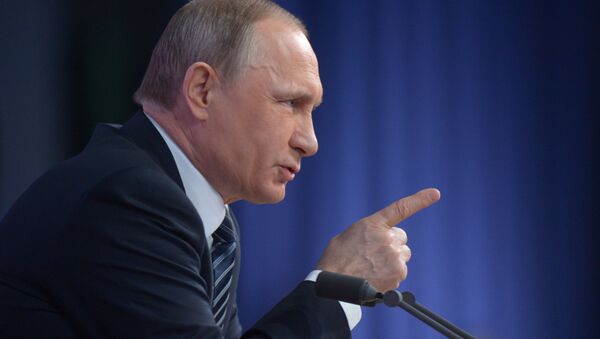 No doubt, Russian President Vladimir Putin would win the "person of the year". He is the symbol of Russia coming back as a major player in the international arena as well as the incarnation of Russia for the majority of Russian people.

In March 2012, Putin won the presidential election, having received 63 percent of the vote. Such a victory is an unattainable result for many world leaders, including French President Francois Hollande, an article in Boulevard Voltaire read.

"Can one be a de Gaulle admirer, support Reagan and Tatcher in the early-1980s and at the same time support Putin? Without hesitation I’d say yes. It may seem that those leaders are different. But in fact they all have one common feature – they incarnate the rise of the countries they rule," the author wrote.

German Newspaper Nominates Putin as 'Political Winner' of 2015
There are some values common for Charles de Gaulle and Vladimir Putin, according to the article.

"The axis of their policies is patriotism. For such leaders, the national interest is above all. De Gaulle used to say that Russia was absorbing communism. Now, communism is dead and Russia is still alive. And it cannot abandon the Soviet period because of the might it gives. Re-phrasing de Gaulle, Russia without its might is not Russia," the author wrote.

According to the article, now Russia can restore its might through adopting pragmatism, conservatism and realism in its domestic and foreign policy, and this is what Russia has embraced during Putin’s rule.