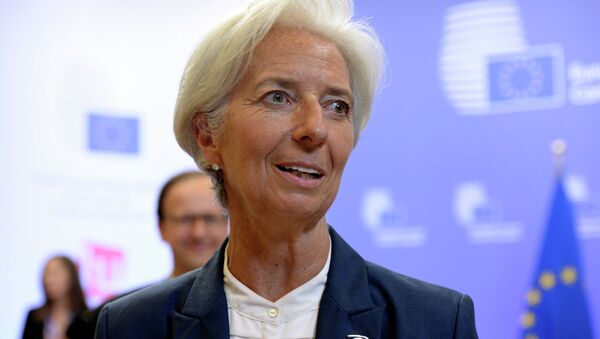 © AFP 2021 / THIERRY CHARLIER
Subscribe
The head of the International Monetary Fund (IMF) predicts the growth of the world’s economy in 2016 will be “disappointing,” amid destabilizing factors including rising interest rates in the US and a slowing economy of China.

Christine Lagarde stated that global trade has seen a significant decrease and a plunge in commodities prices is threatening economies. Financial sectors in many states are also weak due to financial risks in emerging markets, she added.

“All of that means global growth will be disappointing and uneven in 2016,” Lagarde said.

Low productivity, ageing populations in developed countries and the aftermath of a global financial crisis have diminished growth, the IMF head asserted.

Global Economic Confidence Hits Bottom, Weighing on Commodity Prices
In IMF assessments last October, the economy was projected to grow by 3.6 percent in 2016.

Lagarde praised the US move toward the normalization of its monetary policy and China’s attempts to switch to a consumption-led economy as “necessary and healthy” steps, noting that they should be taken calculatingly.

The IMF warned of the “potential spillover effects" of interest rate increases, expressing concern over the ability of states other than highly developed economies to absorb economic shocks.

"Most highly developed economies except the USA and possibly Britain will continue to need loose monetary policy but all countries in this category should comprehensively factor spillover effects into their decision-making," she suggested.

Lagarde said that heightened US interest rates and a stronger dollar could result in companies defaulting on their payments and that this could “infect” banks and states.

000000
Popular comments
That woman is not making a forecast...it's a promise.

Ivan Buckeye
31 December 2015, 06:50 GMT2
000000
World to Face 'Disappointing' Economic Growth in 2016 – IMF Chief And that's because of you zionist criminal running and ruining the world! Don't you entities have enough already!! The world would be a much better place without you that's for sure!!!