Thousands of Syrians in Besieged Northwest Threatened by Hunger, Violence 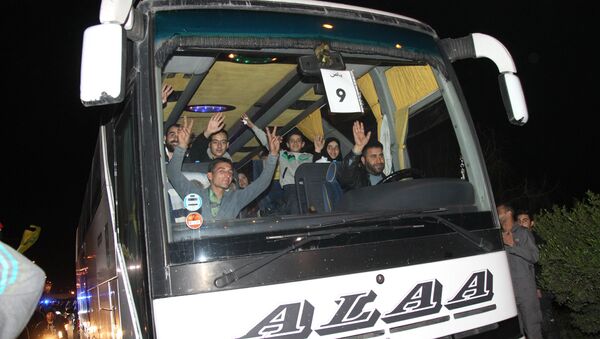 © AFP 2022 / ANWAR AMRO
Subscribe
Several terrorist groups in Syria have besieged a number of Shiite villages in the northwestern province of Idlib, with the Syrian army and the government repeatedly trying to evacuate civilians through intermediaries in exchange for militants seized by the Syrian army on the outskirts of Damascus.

Rescued Syrians Recall Horror of Living in Villages Besieged by Al-Nusra
LEBANESE-SYRIAN BORDER (Sputnik) — Agreements on the swaps fell through several times in the last six months, however, 123 injured militants from the city of Zabadani near Damascus were exchanged on Tuesday for 336 inhabitants of the Shiite towns of Foua and Kefraya and their relatives.

The deal was reached through the mediation of Tehran, Ankara and the United Nations.

Under the agreement, the Kefraya and Foua evacuees were transported to the Turkish border from where they were flown to the Lebanese capital of Beirut. While the wounded militants were due to be given safe passage to Beirut, from where they could fly to Turkey.

Upon their arrival to Beirut International Airport on the Lebanese-Syrian border, the rescued Syrians recounted some of the hardships of besieged life and the difficulties they had faced after being liberated.

Road to the unknown

There were buses full of the evacuated Syrians on the border — tired, exhausted people were waiting for border officers to finish the formalities of checking documents. Some 40 miles separated them from a new, unknown residence.

Daesh’s 90-Day Nightmare: Results of Russia’s 2015 Syrian Operation
Near one of the buses we managed to talk to a Kefraya resident, Yahey Muammar. He was included in the list of evacuees as a relative accompanying the wounded. One of Muammar's relatives was severely injured by shrapnel, which required the amputation of both arms.

"We were waiting all day until they told us that the buses would arrive at 5:30 a.m. to pick us up. The buses arrived late, so did we, all down to the numerous, thorough, painful searches at militant checkpoints," Yahey said.

He added that the militants purposely checked the civilians thoroughly and for a long time at checkpoints to "complicate the way." The militants took away gold items and mobiles from some passengers, Yahey said, adding that some adult men were threatened.

The civilians were transported in old buses which formerly belonged to a Syrian government company. Later, the militants appropriated the buses when capturing cities all across Idlib.

"The buses' windows had been knocked out, so our hunger and fear were multiplied by the cold," Yahey said.

Red Crescent staff, who were responsible only for transporting formerly trapped Syrians, were unable to defend the civilians. The people who were traveling into the unknown understood that in the event of any unforeseen or emergency situation the medical staff would be unable to help. The evacuees were also warned of the danger posed by militants operating in the area.

"After surviving a long and painful road, we found ourselves on the Turkish border. They gave us food, but we were forbidden to leave the bus, even for the lavatory, despite the fact that — as you can see — the group mostly comprises elderly people and children. They kept us on the buses for some three hours. Then we taken to the airport and were immediately put on a plane that brought us to Beirut, where we were warmly welcomed," Yahey continued.

After a short silent pause, Yahey sat down from fatigue and began to talk about how people had survived the blockade.

"There were none of the things that are required for a normal life. People ate low-quality flour. There was no fuel, and very little water. The UN sent humanitarian aid pasta, tajin and sugar. Such cargo arrived only once, and even then the trucks were half-empty as the terrorists had stolen a large part of their contents," he said.

The story about the hard life during the siege was continued by a nurse from Foua, Ibtissam Abu-Zira, who used to work in her home town.

According to her, the water in populated area was only supplied once a month, at a very low pressure, so, there was a desperate shortage of water for daily needs like washing and cooking.

"We cooked without fat, oil and onions. All produce was incredibly expensive. A kilogram of onions cost 8,000 lire [about $20]. Meat prices were much higher again. We received meat from residents who had sheep, but the flock has dwindled in numbers," she said.

Gaining Ground: Syrian Army Establishes Control of Many Strategic Areas
The worst thing about Ibtissam's civilian life in Syria was the shelling and mortar fire, she said.

As an employee of a city hospital, she had to leave her children and her husband, to assist and cure the injured.

The most basic difficulty in helping those in need was an acute shortage of medicines. So much so, there were almost no basic syringes and painkillers, Ibtissam said.

Some necessary medicines and humanitarian assistance literally fell from the sky — from the Syrian Air Force transport planes, but such assistance had little effect on the devastating humanitarian situation in the besieged city.

"We were dying a slow death, of which thousands of our citizens are dying at the moment. Instead of roofs we had stretched fabric. Most of the children go barefoot because their shoes fell into disrepair during the siege and they have forgotten what fruit looks like," a teacher of the only surviving school in Foua, Abeer Mantu, said.

According to her, the militants often fire at neighborhood where the school is. As a result, pupils more often than not become victims of terrorist attacks.

As Abeer finished speaking, Muammar said in a trembling voice: "If we have no one to save us, we will all die of hunger and rocket attacks. I want to appeal to all international organizations. They treat the militants humanely, and provide us with minor support… We are people who love life and love other people. We did nothing wrong," the man said with a tear in his eye.

"We are grateful to [Russian] President Vladimir Putin for the fact that Russia began to fight against the terrorists, forcing them to agree to a peace process. I would like to ask the Russians to increase the number of airstrikes on terrorists so they leave us sooner," Yahya said.

The first group of the people rescued and evacuated from Foua and Kefraya will be settled in Shiite neighborhoods of Damascus, the government has decided. Places for the wounded have already been prepared for them in hospitals.

These people will be able to live in their new homes as long as they need, until the blockade is lifted from their hometowns and life becomes stable and secure.