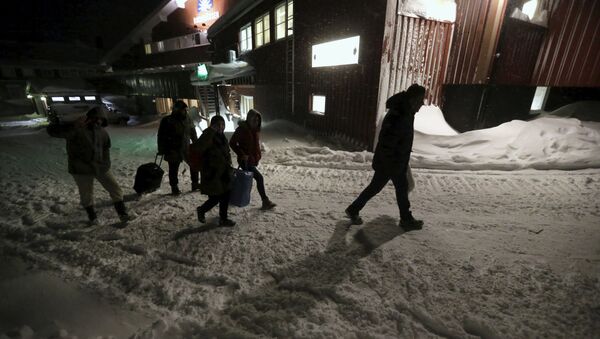 A group of refugees in Sweden asked local authorities to be relocated from one housing facility into another, saying that the one they currently live in is haunted by ghosts.

The asylum-seekers were frightened by flickering lights and noises in the plumbing system of a housing facility in Grannaforsa, a small town in the Swedish province of Smaland.

According to local Migration Agency manager Magnus Petersson, 35 refugees approached the agency's office on Tuesday and asked to be resettled.

"Doors are getting reopened by themselves. And there is no one outside," Syrian refugee Hamid Alojali told the local newspaper Smalandsposten, according to AP.

Broken Dreams: Why Are Iraqi Refugees Massively Fleeing Sweden?
The man added that the place the group of refugees currently live in is haunted by ghosts.

Some refugees said they would rather stay in tents than in Grannaforsa, because "it's too dangerous to be there," AP said.

The facility was built in the 19th Century and was long used as housing for disabled people. After that during World War II, it housed German deserters.

Since the building is really old some of its doors might be a bit crooked and old pipes could make noises, especially when temperatures outside drop. While the flickering of lights was probably caused by problems in electrical switches, Stefan Johansson, co-owner of the housing facility, explained, according to AP.

Sweden has taken in some 150,000 refugees this year, mostly from Syria, Iraq and Afghanistan. The large number of asylum-seekers has forced the Swedish government to look for housing facilities across the country, even in remote villages surrounded by the wilderness.