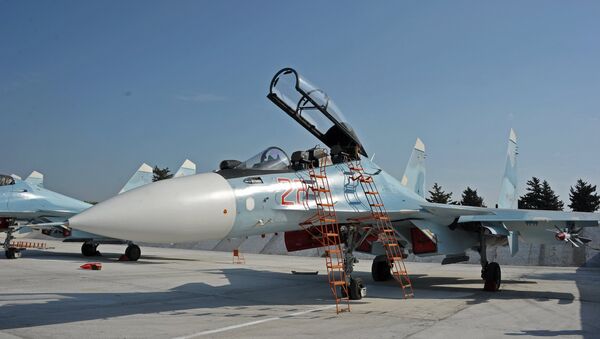 © Sputnik / Dmitry Vinogradov
/
Go to the photo bank
Subscribe
Three months ago, on September 30, at the request of Syrian leader Bashar Assad Russia launched a military operation against terrorists of Daesh (Islamic State).

Russian Warplanes Destroy 20 Daesh Oil Tanker Trucks Headed for Turkey
The very next day, the Russian Defense Ministry reported the first results of the offensive. Since then, each sortie of Russian warplanes and each airstrikes against terrorists have made headlines.

During the first day of the operation, Russia hit 12 Daesh targets with Su-24M and Su-25 jets. Among the destroyed targets were terrorist command points, ammo and fuel depots, and production facilities.

The first report showed the unprecedented successes of Russian weapons. But those results fade in comparison to what has been done since then. Three months later, during the five days of the third week in December, Russian warplanes conducted 302 combat sorties, having destroyed 1,093 Daesh targets.

Russian Airstrikes on Daesh-Turkey Oil Smuggling Reveal Huge Scope of Theft
The operation also marked the first combat use of the advanced Kh-101 cruise missile. This strategic air-to-surface missile utilizes stealth technologies and can hit targets at a distance of up to 5,500 km, with an accuracy of five meters. Missiles were fired from Tu-160 strategic bombers which did not even need to enter the Syrian airspace.

In order to launch the offensive, in the shortest time possible the Russian military managed to deploy an entire task force unit to Syria and provided its full combat readiness. Initially, the unit comprised over 50 aircraft and helicopters deployed to the Hmeymim airbase, outside Latakia. Among them are Su-24M bombers, Su-30SM jet fighters, Su-34 bombers, Su-25SM ground attack jets as well Mi-8 and Mi-24 attack helicopters. On November 17, 25 bombers of the Russian long-range aviation and 12 Su-34 and Su-24SM were additionally involved in the operation.

In addition to Hmeymim, Russia has used the Shairat airfield in Homs and al-Gayas airfield in Palmyra. In order to protect the facilities, the 810th marine brigade, special operations units and airborne units were deployed to Syria from Russia.

Middle Eastern Knot: What 2016 Will Bring for Syria?
Several Pantsir-S1 air defense missiles and a Krasukha-4 electronic warfare system were deployed to protect the Russian aircraft. On November 26, Russian S-400 Triumf air defense systems arrived in Latakia. They protect the Hmeymim base as well as the 600 km of airspace around.

The Russian forces in Syria have also been backed from the sea, by a naval tactical unit led by the Moskva missile-carrying cruiser. In early-December, the B-237 Rostov-on-Don submarine took part in the operation, having fired Kalibr-PL missiles at Daesh positions in Syria. What is more, missile ships of the Caspian Flotilla have also been involved. On October 7 and then on November 20, they fired Kalibr missiles from the Caspian Sea and successfully hit the targets from a distance of 2,500 km.

The scope of such a large-scale military offensive always presumes casualties. On November 24, a Turkish jet shot down a Russian Su-24SM bomber. Pilot Alexei Peshkov managed to eject but was shot dead by militants from the ground. The same day, marine Alexander Pozynich was killed during a search-and-rescue operation for the pilots of the downed jet.

US Officials Have No Choice but to Admit Russia’s Successes in Syria
As for the geography of the Russian operation, most of the airstrikes have been focused in the provinces of Aleppo, Deir ez-Zor, Raqqa, Latakia, Palmyra Damascus and Hama. According to intelligence, Daesh command points, positions, fortifications and ammo depots are concentrated there. Russia’s pinpoint airstrikes in those areas have helped the Syrian Army make significant advances against the terrorists.

The support of Russian aviation has helped the Syrian forces regroup and launch an offensive against militants. With the aerial support, they lifted the siege of the Kweiris airbase and the Marj al-Sultan airfield in the eastern suburb of Damascus. The Syrian Army also cleared 12 towns in Latakia of Daesh militants and a number of strategic heights. In Palmyra, government troops advanced for six kilometers and liberated the town of Maksam.

Daesh militants are gradually being eradicated, and soon the threat to Damascus will be neutralized. This would be the second landmark victory of the Syrian Army after the siege of Aleppo was lifted. The Syrian capital will finally return to life as usual and the government will focus on the restoration of its infrastructure.

According to the Syrian General Staff, it was the support of the Russian aviation which helped the Syrian Army launch a large-scale offensive for the first time in four years, and liberate 80 towns and villages. A total of over 500 sq km of land were taken under control by government forces since the beginning of the Russian operation.

"During the Syrian operation, the Russian military has proved its effectiveness and readiness for sustained combat. Even our potential rivals have to admit the successes of the Russian aviation in Syria. They had a chance to see the Russian military in action, and they were shocked," military analyst Vladislav Shurygin told TV channel Zvezda.