Russian PAK FA to be Equipped With Futuristic Photonic Radar 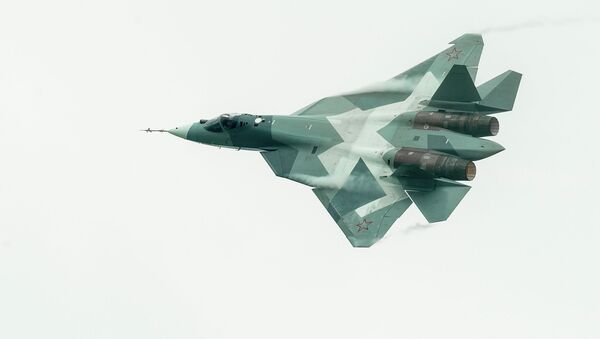 © Flickr / Mario Sainz Martínez
Subscribe
International
India
Africa
Russia’s fifth-generation fighter PAK FA (T-50) may be equipped with an advanced radar which is currently being developed by a Russian corporation.

KRET is a part of Russia’s Rostec corporation, it developed the electronic systems for the aircraft.

The future radar will be based on the photonic technology that greatly expands the possibilities of communication and radar as their weight will be decreased by more than half and the resolution will increase tenfold.

The ultra-wideband ROFAR signal allows one to virtually get a TV picture on a radar range. Radio photonic technology, in particular, will enhance the capabilities of the latest generation of Russian airplanes and helicopters.

“After our work on ROFAR, a list of aircrafts both manned and unmanned will be presented with an offer to be equipped with the radar based on radio-optical phased arrays. I think that the PAK FA will also be on this list and there will be specific proposals given to it,” Mikheyev told reporters, adding that the final decision will be taken by the Department of Defense.

The developer of ROFAR, KRET has established a laboratory on radio photonics. The concern has already started to perform laboratory tests to create ROFAR. Designed to be finished in 4.5 years, the project remains on schedule, which was agreed on with the Foundation for Advanced Studies.

As was earlier reported by the Deputy CEO of KRET, Igor Nasenkov, the company intends to establish a full-scale sample of the future radar by 2018.

“The PAK FA is a fifth-generation aircraft, with a number of brand-new technologies used in its development. It is a 100 percent digital aircraft. It can provide full information support to the pilot. The aircraft is equipped with versatile antenna systems built in its covering,” Nasenkov said during the Dubai Airshow 2015.