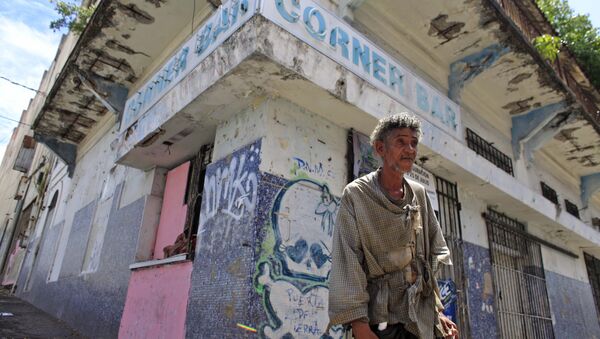 The debt-ridden US territory in the Caribbean is about to default on at least parts of its $1 bln worth of debt payments due on January 1, as the island has only $330 mln to meet its obligations.

Kristian Rouz — The heavily-indebted US territory of Puerto Rico is heading toward a massive default on its bonds, entailing lengthy court proceedings, as the island has signaled its inability to submit at least part of its due debt payments to creditors. As the January 1 deadline nears, the governor of Puerto Rico, Alejandro Garcia Padilla, only intends to notify the bondholders of whether the island would pay or not, while the situation requires urgent practical steps to avoid or postpone the bond meltdown.

Global Economic Confidence Hits Bottom, Weighing on Commodity Prices
Puerto Rico seems to be gearing up for a default as, moreover, the federal government in Washington has repeatedly made clear there would be no bailout for the debt-ridden island.

On January 1, Puerto Rico must submit $1 bln of debt payments to its bondholders, or else it will technically default on its bond obligations. The official reports by the local government, however, suggest they have only enough money to finance some $330 mln on general obligations, or top priority Puerto Rican bonds, and only at a cost of non-payment on other types of bonds.

Should Puerto Rico default on its select bonds, the complex structure of its debt issuance would trigger a complicated court proceeding procedure and it is yet to determine which bonds are higher priority compared to others so that the court could work out a crisis solution.

Governor Garcia Padilla has reiterated the island's $70 bln worth of debt is unpayable under the current economic and financial circumstances. Puerto Rico has been suffering a lengthy financial crisis, with a large part of its productive forces unable to provide a sustainable economic development. The island's public expenditures have been debt-financed, therefore, should Puerto Rico default on parts of its debt, such spheres as education, medicine and utilities will be put on the brink of non-existence.

Cuba’s Castro Expects Tough Economic Conditions in 2016
Puerto Rico has been conducting negotiations with its creditors who are attempting to persuade them to write-off part of its debt, but hardly any progress has been reached.

The US territory has already defaulted once in August, having failed to meet its obligations on Public Finance Corp (PFC) bonds. The island's economy has shrunk for over a decade, its poverty level has reached 45%, while the tax base is declining as people leave for the mainland United States.

The high-priority governmental bonds (GO bonds), however, have high chances of being paid, however, Puerto Rico is likely to default on its $35mln worth of Infrastructure Finance Authority (PRIFA) bonds, $1.4 mln worth of PFC bonds, and some $91 mln worth of buildings authority (PBA) bonds.

The United States Secretary of the Treasury, Jack Lew, admitted the missing payments on parts of Puerto Rican debt are 'inevitable', however, he noted, it would not necessarily mean an immediate default.

"Look, they're effectively in default", Lew said to Fox Business Network on Monday. "They've already been taking money out of pension funds to pay current bills. They've been shifting money from one creditor to pay for another creditor. That's effectively default. You don't have to wait until you miss a coupon payment to say you're in default."

Although Puerto Rico might submit its payments on GO bonds, it might as well miss the deadline, sending shockwaves across the entire US municipal bonds market.

All other Puerto Rican obligations are less significant as their impact would only affect the island itself in case of defaults, but the GO bonds are considered safe by the market even though the island's economic situation is dire. The GO bonds are backed by the island's tax base and the bond documentation provides that any financial resources the island has, should be allocated to meet payments on GO bonds.

Should the island default on GO bonds, it will be another bad omen for the entire US bond market and a yet another snap after the Their Avenue junk bonds' fallout in early-to-mid December.

"It is very probable that from here on out, Puerto Rico will not find the mechanisms to make its payments," said Governor García Padilla. "Cash has run out. There are no more fiscal gymnastics that we can do."

The most recent GO default in the US happened in 2013, when the city of Detroit failed to meet its GO debt obligations. However, the Puerto Rican GO fallout, if it is to happen, will be preceded by defaults on other bonds, primarily, the PRIFA bonds.