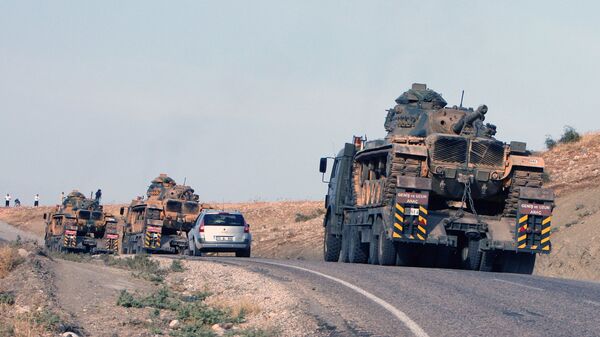 © AP Photo / Burhan Ozbilici, File
Subscribe
International
India
Africa
Iraq on Wednesday warned that it will consider military action if Turkey does not comply with Baghdad's latest demand to withdraw troops from a northern camp where they are training anti-Daesh fighters.

On Wednesday, Iraqi Prime Minister Haider al-Abadi said that Turkey had not honored a commitment to withdraw its troops from the region.

Iraqi Foreign Minister Ibrahim al-Jaafari on Wednesday said that Baghdad will continue to pursue a peaceful resolution, but warned that if "fighting is imposed on us, we will consider it [necessary] to protect our sovereignty, people and resources," the Associated Press reported.

In response, Turkish Prime Minister Ahmet Davutoglu on Wednesday said that if Baghdad wants to use force, it should be against Daesh.

Speaking during an interview on NTV, Davutoglu acknowledged there had been "miscommunication" over the troop deployment. He said that Ankara respected Iraqi sovereignty but added that Baghdad is not in control of one third of its own territory.

On Monday, Iraqi forces backed by US-led airstrikes drove Daesh militants out of the center of Ramadi, the capital of the western Anbar province, raising the Iraqi flag over the main government complex.

Daesh seized control of Ramadi in May in what was the terror group's biggest advance since the beginning of the US-led air campaign in August 2014.

General Ismail al-Mahlawi, the provincial military commander, said operations were paused in Ramadi on Wednesday due to rainy weather, the AP reported. Daesh militants still control about 30% of the city.