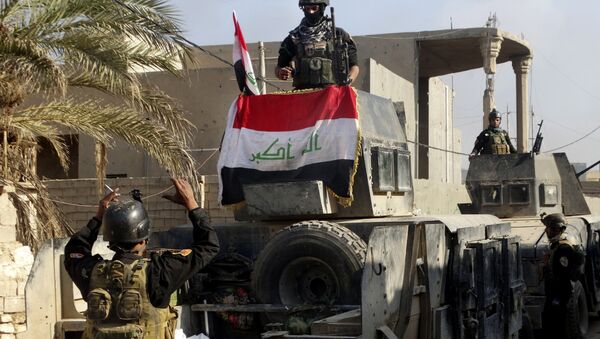 Iraqi Prime Minister Haider al-Abadi said on Monday that the coming year would see his forces defeat Islamic State, after his military recaptured Ramadi, a provincial capital west of Baghdad, which fell to the terrorists in May.

Iraqi forces flew the national flag above the city’s main government complex in their first major victory since collapsing in the face of the fighters 18 months ago.

"2016 will be the year of the big and final victory, when Daesh's presence in Iraq will be terminated. We are going to liberate Mosul and it will be the fatal and final blow to Daesh," Abadi said in a speech broadcast on state television.

Mosul, northern Iraq's main city, is by far the largest population center in the self-proclaimed caliphate Daesh rules in Iraq and Syria.

The capture of Ramadi, the capital of the mainly Sunni-Muslim Anbar province in the Euphrates River Valley west of the capital, deprives Islamic State militants of their biggest prize of 2015.

Iraqi Army Declares Complete Liberation of Ramadi From Daesh
The fighters seized it in May after government troops fled in a defeat which prompted Washington to take a hard look at its strategy in its ongoing air war against the militants.

After encircling the city for weeks, the Iraqi military launched a campaign to retake it last week, and made a final push to seize the central administration complex on Sunday.

Security officials said the forces still needed to clear pockets of insurgents in the city and its outskirts.

Iraq's army took the lead in the battle for Ramadi, with the Shi'ite militias prominent in other campaigns held back from the battlefield to avoid antagonizing the mainly Sunni population.