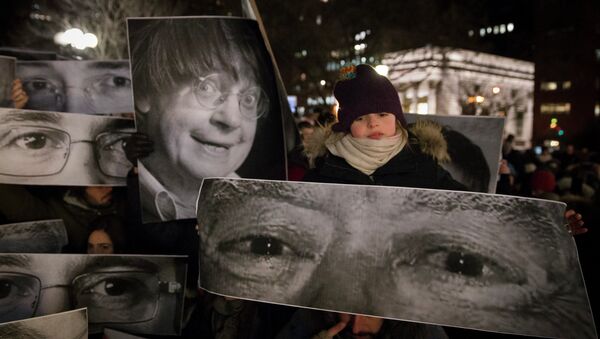 © AP Photo / John Minchillo
Subscribe
The attack on the Charlie Hebdo office in France placed the country in the top three deadliest nations for journalists in 2015, coming in just behind Syria and Iraq.

Daesh Claims Responsibility for Murder of Syrian Journalist in Turkey
The report comes from Paris-based media freedom organization Reporters Without Borders, who document that 67 journalists were killed globally this year, either as a result of their work or while reporting. An additional 27 citizen journalists and seven media workers were also killed.

In a first, the organization also compiled a list of 43 journalists who died from causes that are unexplained.

Another organization tracking media-employee-related deaths, called the Committee to Protect Journalists, found that 69 journalists were killed, and it is unclear why their numbers varied from RWB.

"Journalists are a target and this just confirms it," Joel Simon of the Committee to Protect Journalists told Yahoo News. "This is a global threat."

RSF echoed the same sentiment as CPJ, in that journalists are in danger, simply for doing their job.

"The majority aren't journalists in the wrong place at the wrong time during a bombing raid, they're journalists who are murdered to stop them from doing their jobs," RSF Secretary General Christophe Deloire told Reuters.

He suggested that being a journalist in the digital age exposes one to an expanded list of potential threats.

"Today if you're a journalist, even if your audience is just readers in your country… you're exposing yourself to nutcases on the other side of the world, groups of religious extremists, that could put you on a blacklist, and then other people take action and come and kill you."

The attack on the Charlie Hebdo office in January killed eight journalists as well as several other workers, including security and administrative.

Last year, the majority of journalists killed died in war-torn countries, but this year two-thirds were killed in nations that are at peace, largely due to the attack at the Charlie Hebdo office.

This year was more deadly for journalists than last year by one, and slightly below the average for the past decade.