Erdogan: Liberating Syria's City of Jarabulus From Daesh a Priority 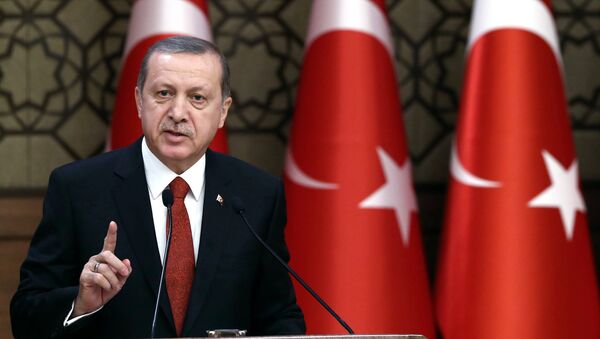 ANKARA (Sputnik) — Turkish President Recep Tayyip Erdogan considers liberating Jarabulus, a Syrian northern city near the Turkish border, from Islamic State (IS or Daesh in Arabic) militants to be a priority task of the US-led international coalition.

"Coalition forces are currently conducting operations against IS in Jarabulus, its liberation from IS is a priority task. These attempts are being continued, and we will do it," Erdogan said at a press conference at Istanbul's airport before departing for Saudi Arabia.

According to Erdogan, there is still no exact data for the transition of Syrian Kurds divisions to the west bank of the Euphrates river, which Ankara had previously strongly opposed.

"We can not close our eyes to the activity of such terrorist organizations, as the [Syrian Kurdish] Democratic Union Party and its [military wing] YPG, which are carrying out ethnic cleaning; we can not recognize them simply because they fight against IS, because if we did so, it would only add fuel to the fire," Erdogan said.

'Shadow CIA' 2016 Forecast: Turkey Set to Make a 'Military Move' Into Syria
Syria has been in a state of civil war since 2011, with the country’s government fighting a number of opposition factions and radical Islamist groups, including the Islamic State terrorist group, which is outlawed in many countries, including Russia.

A US-led international coalition of around 60 nations, including Turkey, has been conducting airstrikes against IS targets in Iraq and Syria since 2014, without the approval of the Syrian authorities of the UN Security Council. Russia has been conducting a separate air campaign against the group's positions in Syria since September 30, following a request from Syrian President Bashar Assad.