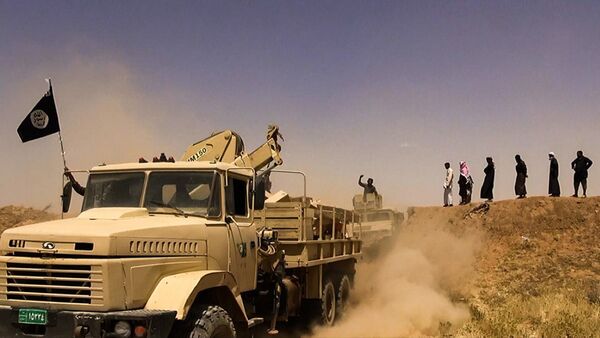 © AFP 2021 / HO / ALBARAKA NEWS
Subscribe
A parcel of Daesh (ISIL) documents acquired by US Special Operations in Syria sheds light on the group’s internal structure and provides insight into how a small militant group grew and seized large areas of Syria and Iraq, media reported.

According to information in the documents, Daesh appears to be an organization with a strong hierarchical bureaucracy and specific legal codes written in the form of Muslim religious rulings, called fatwas, US officials state, following a review of some of the papers, as reported by Reuters.

"This really kind of brings it out. The level of bureaucratization, organization, the diwans, the committees," Brett McGurk, President Barack Obama's special envoy for the anti-IS coalition, told Reuters.

US Wars Created Daesh 'Monster' - German Politician
The radical organization established a set of so-called “diwans,” the equivalent of ministries in legitimate states, each of which deals with a particular sector of the group’s revenue.

For instance, there is a diwan handling "war spoils," such as slaves, or a diwan specialized in the exploitation of natural resources, including oil.

Aymenn al-Tamimi, a fellow at the Middle East Forum think tank, said that Daesh successfully created a bureaucratic machine that is the image of a legitimate state.

"Islamic State is invested in the statehood and caliphate image more so than any other jihadist enterprise. So a formal organization, besides being practical when you control so much contiguous territory and major cities, also reinforces the statehood image," he told Reuters.

Most Daesh laws are fatwas that regulate all sides of the group’s activities, including the treatment of slaves, having children and rape of people captured by jihadists.

Horror Revealed: Daesh Women Slaughtered Syrian Mother Breastfeeding Baby
For instance, a brochure signed, "From Creator’s Rulings on Capturing Prisoners and Enslavement," states that militants should not separate captive “infidel” mothers from their children, but that Daesh members are allowed to have sex with them.

Another fatwa in the list sanctions human organ harvesting, offering evidence that Daesh may be involved in the trade of body parts.

In other revelation, Reuters reported, Daesh intends to implement fatwas not only in seized parts of Iraq and Syria, but also in those self-proclaimed provinces allied in Africa, the Sinai and South Asia.

US experts said that documents point to weak spots in Daesh culture that will help defeat the extremists. For instance, papers showed that the group, in a mirror of all bureaucracies, is plagued by internal rivalries.

000000
Popular comments
An organization of such scale needs a lot of advising and management from you know who. ISIS could not have done it by themselves.
Athanasios
29 December 2015, 08:51 GMT
000000
Correction.. and specific legal codes written in the form of WAHABBI religious rulings, called fatwas..! Surprisingly.. it is always the US who got these kinda info.. hehehe.. lol..!