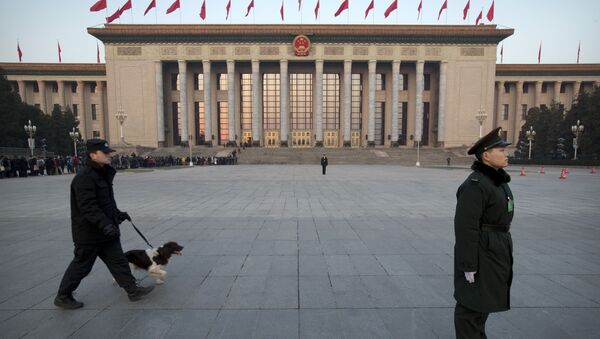 China Discontent With US Criticism of Beijing's Anti-Terrorism Law
The law will take into effect basic principles for counter-terrorism operations and in order to strengthen measures of prevention and punishment the departments may collaborate with overseas governments and international organizations in holding policy dialogues, communicating on intelligence information, enforcing the law and regulating international capital.

As noted the head of the Russian-Chinese Faculty of Journalism at Moscow State University, Evgeny Zaytsev, such actions do not denote anything extraordinary.

“This law was discussed for a long time; since October of last year and the Chinese were able to take into account its various details and subtleties so any serious infringement of the interests of Chinese citizens will not occur,” Zaytsev told Radio Sputnik.

He said that assumptions are being expressed in the West suggesting that Chinese businessmen will have to work hard, that they will have limited access to advanced information and communication technologies. But according to the analyst it is a ‘work issue’ and it will be resolved. The new law is an attempt by the state legislature to protect their interests and the interests of citizens.

Talking about why China decided to put forward such law, the analyst said, “The Uighur factor is definitely the most decisive one. Despite the fact that the Chinese have successfully and consistently solved the problem by stabilizing the situation in Xinjiang, this troubled time in Iran, Iraq, Syria and Turkey is pushing the Uighur nationalists to more action. It is sufficient to say that a number of Uighur nationalists have settled in Turkey, where they undergo appropriate training. After receiving their training they come back and begin their task,” Zaytsev said.

SCO Gov't Heads to Discuss Counter-Terrorism at Annual Meeting in China
The adoption of anti-terrorism law in China, according to him, is a way for Chinese authorities to continue to work to strengthen the country.

In March, US President Barack Obama criticized the bill. According to him such law will force foreign companies, including US ones, to transfer confidential information to the government of China as well as creating “mechanisms to spy on and monitor all users.” Obama called on Beijing to change these provisions of the bill, if they want to cooperate with the United States.

Zaytsev said that such statements sound illogical and even ridiculous.

“I do not think the US will go to any serious sanctions in terms of violations of economic cooperation with China. But, nevertheless they will use sort provocation. For example, during this Catholic Christmas the US Embassy in Beijing spread information that there is a possible terrorist threat and alleged attack is planned in the area, where the diplomatic mission is located. As soon as this statement was released by the United States its closest allies — Australia, United Kingdom also spread such information. They tried to create air of instability.”

Nonetheless, Zaytsev noted that the Chinese authorities responded to such provocations adequately: they simply stepped up the patrols and introduced the usual yellow line of danger.

However as the analyst stressed the US may continue such small provocative actions to agitate China further.