UN Says Over 450 Civilians Evacuated From Syria Under Local Ceasefire 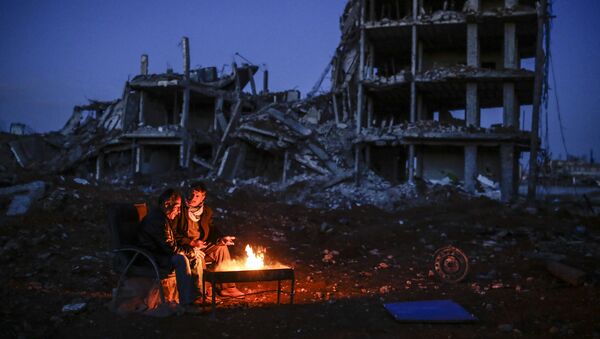 © AFP 2021 / YASIN AKGUL
Subscribe
More than 450 civilians have been evacuated from the areas besieged by militants in Syria under a ceasefire deal.

West Realized Need for Ceasefire in Syria as 'Rebels Lose Ground'
UNITED NATIONS (Sputnik) – More than 450 civilians have been evacuated from the areas besieged by militants in Syria under a ceasefire deal reached with the government, the United Nations announced Monday.

"The United Nations (UN) in Syria, in partnership with the Syrian Arab Red Crescent (SARC), and the International Committee of the Red Cross (ICRC) have successfully facilitated the evacuation of more than 450 people including the injured and their accompanying family members, following a local Agreement concerning the Syrian towns of Foua, Kafraya in Idleb and Zabadani and Madaya in Rif Damascus," a joint statement published on the UN's website read.

Those people were evacuated by land and air through Turkey and Lebanon to the agreed final destinations where urgent medical assistance will be provided if needed, it highlighted.

"The humanitarian community in Syria is keen to see the swift implementation of the next phases of the Four Towns Agreement including humanitarian access to people in these towns. We stand ready to continue providing relief and livelihoods assistance to the millions of people wherever they are in Syria as they bear the brunt of this crisis," UN Resident and Humanitarian Coordinator in Syria Yacoub El-Hillo said in the statement.

Earlier in December, Bashar Assad's government and opposition forces reached a conditional ceasefire agreement under UN aegis in al-Waer, a Homs city district that has been under government siege since 2012.