US, Allies Allocate Over $50Mln to Rebuild Ramadi - Kerry 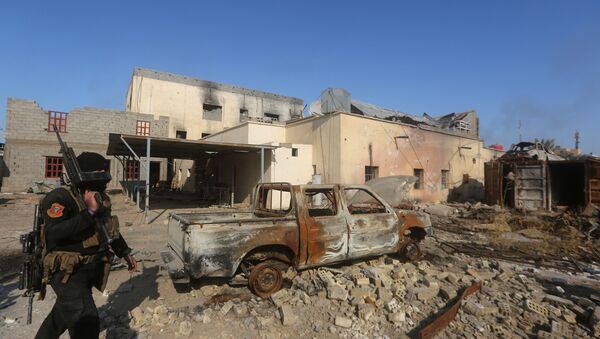 © AFP 2023 / AHMAD AL-RUBAYE
Subscribe
International
India
Africa
US Secretary of State John Kerry said that the United States, together with other members of the coalition against Daesh, has provided the United Nations Development Program more than $50 million to rebuild the city of Ramadi.

US to Continue Support for Partners Fighting Daesh After Ramadi Retake
WASHINGTON (Sputnik) — The United States, together with other members of the coalition against Daesh, has provided the United Nations Development Program (UNDP) more than $50 million to rebuild the city of Ramadi after it was retaken from the terror group, US Secretary of State John Kerry said in a statement on Monday.

"Dislodging ISIL from areas it has occupied is a central part of Iraq’s security strategy, but it is also vital to rebuild and stabilize the areas that have been liberated," Kerry stated. "The United States and members of the coalition have pledged or contributed over $50 million to the UNDP stabilization fund to support these efforts."

Kerry explained the government of Iraq and Anbar province Governor Sohaib al-Rawi will lead the efforts to restore Ramadi.

Earlier on Monday, Operation Inherent Resolve spokesman Colonel Steve Warren confirmed that Iraq's army had gained full control over the strategically important city of Ramadi that had been under Daesh control since May.

Kerry also noted that the coalition against Daesh has supported the Ramadi campaign with precision airstrikes, training, advice as well as equipment.

"That support will continue as the mission in Ramadi is completed and we prepare for post-conflict stabilization," Kerry added.

The Islamic State, also known as Daesh, is a terrorist group outlawed in Russia as well as other countries. The group has seized large areas in Syria and Iraq and declared a caliphate under the rule of Sharia law there.