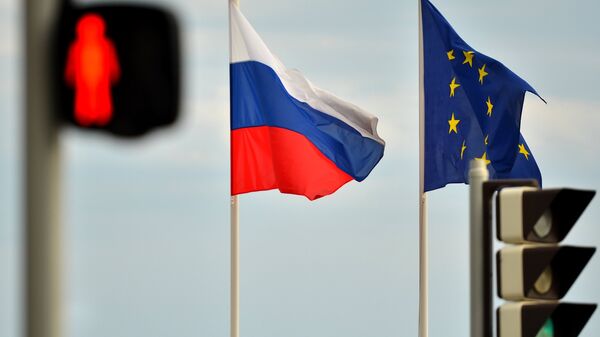 "This year [2015], I suppose, has become the most difficult in 26 years of our official relations with the European Union. In a sense, our relations have become hostages of the West's line, in this case I mean not only the confrontation with our country. Formally — under the pretext of the Ukrainian crisis, but if [we think] deeper — due to geopolitical reasons," Chizhov said at a press conference, organized by RIA Novosti.

According to the diplomat, Western political line towards Moscow appears in several forms, including in its aspiration to keep Russia under sanctions, "freezing" lots of cooperation formats and attempts to "counter mythical Russian propaganda."

Russia's EU envoy Vladimir Chizhov said Monday that he is hopeful of restoration of bilateral summits between Russia and the European Union.

On Thursday, EU Ambassador to Russia Vygaudas Usackas told RIA Novosti that relations between Moscow and the 28-nation bloc had taken a heavy blow and important summits like Russia-EU summits may never be held again in the future.

"I do not want to take upon myself a function of interpreter of my friend Usackas' statements. I think that he could have meant that atmosphere [on the summits] will not be the same," Chizhov told RIA Novosti.

Chizhov said that summits would take place, because EU's refusal of this format of communication would be a direct violation of agreement between Moscow and Brussels, which established summits on a bi-annual basis.

US Wants to Keep Britain in EU to Offset Continental European Powers
He added that the next summit should be prepared thoroughly and voiced hope that this task should be solved by joint efforts of both Russia and the EU states.

Relations between Russia and the European Union worsened in 2014, when Brussels joined Washington in accusing Moscow of fueling the Ukrainian crisis, and imposed economic sanctions against Moscow.

In response to the Western restrictive measures, in August 2014 Russia announced a one-year food embargo on products originating in states that imposed sanctions. The ban has since been extended for another year.

Earlier in December, the European Union extended the economic sanctions against Russia for another six months until July 31, 2016.