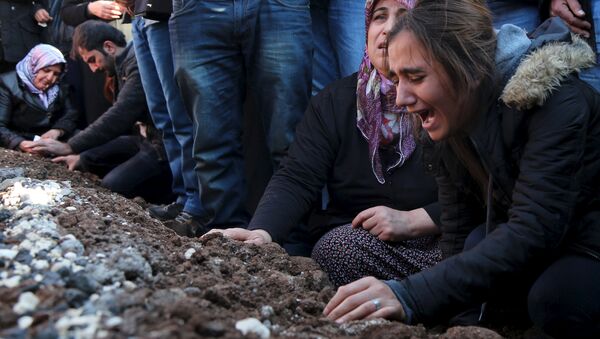 © REUTERS / Sertac Kayar
Subscribe
Turkish society has been keeping silent about what happens in Kurdish towns, where Erdogan’s army and police are shelling residential areas, killing more civilians every week. Why do even Kurds in western Turkey appear so indifferent on the issue?

There are four reasons for residents of the west of Turkey to be indifferent or even hostile to the state violence against Kurds in the southeast, as described in a fresh column published in Al Monitor.

The first reason is related to suppression of any opposition in the country.

“It is not easy to raise one's voice in Turkey against the Justice and Development Party (AKP) government on any issue, especially when it involves the [outlawed in Turkey Kurdistan Workers’ Party] PKK. Multiple times peace activists have fallen victim to terrorist attacks and arrests. For example, most recently 15 Dokuz Eylul University students were arrested in Izmir while protesting for peace,” Al Monitor explains.

Turkey Headed Toward Civil War
Any enthusiasm in the struggle for peace was thus simply put down by the brute force of the repressive regime – news and gossip about harsh arrests and the murders of activists spread quickly.

The second reason is that Kurds, who don’t live in the southeast and don’t face everyday violence perpetrated by Ankara’s security forces, are highly assimilated by the Turkish majority.

“Although [the leader of the only pro-Kurdish parliamentary party, HDP, a Kurd himself, Selahattin] Demirtas is calling upon the people in western Turkey to raise their voices, even the majority of Kurds have not shown willingness to take on this call,” Al Monitor states.

To a large extent, such a low morale is intertwined with the first reason mentioned – simple fear for the repression machine of Erdogan’s Turkey. Even Turks who sympathize with Kurds are afraid to raise their voices.

​The third reason for people in western Turkey remaining silent as full-scale civil war in the southeast is getting momentum is the moral dilemma of speaking up while the number of deaths of police and soldiers steadily grows.

“The majority of people in the west do not view the current unrest as nonviolent resistance but as terror attacks. Several towns in the southeast that had a majority of HDP voters in the last elections have declared ‘self-rule’ and have started digging ditches around their towns. People in the west of Turkey cannot comprehend the meaning of self-governance or the necessity of the trenches, both of which have negative connotations,” Al Monitor details.

The last but not the least reason is the lack of trustworthy information. In Turkey, the majority still gets the news from TV, which is predominantly government-controlled. Social media may not serve as a viable alternative due to the abundance of biased and unverifiable information, Al Monitor notes.

“For decades there have been several incidents of mass violence without proper public reconciliation,” Dilek Gokcin, a film director who closely follows Kurdish matters, told Al-Monitor. “We live in a constant state of denial. So maybe the question ‘Why people are silent when there is a war?’ is not quite appropriate. There is no war here, the war is in Kurdistan. Ignorance then becomes the ultimate bliss. If you don't know, you cannot be held accountable, so most people have a rational apathy because they are helpless in the face of atrocities.”

More than 100,000 people have been displaced due to armed clashes between Turkish security forces and militants from the Kurdistan Workers Party (PKK) in the country's majority-Kurdish southeastern regions, Turkey's Interior Ministry said on Thursday.

Civilian Casualties Mount as Turkey Continues Assault on Kurds
Severe clashes between Ankara forces and PKK militants have been arising sporadically since a July terror attack in the city of Suruc, which killed over 30 people, most of them Kurds. After Kurds killed two Turkish policemen soon after the attack, Ankara launched a military campaign against the PKK. The clashes intensified earlier this week in the southeastern city of Diyarbakir.
Newsfeed
0
New firstOld first
loader
LIVE
Заголовок открываемого материала
Access to the chat has been blocked for violating the rules . You will be able to participate again through:∞. If you do not agree with the blocking, please use the feedback form
The discussion is closed. You can participate in the discussion within 24 hours after the publication of the article.
To participate in the discussion
log in or register
loader
Chats
Заголовок открываемого материала
Worldwide
InternationalEnglishEnglishMundoEspañolSpanish
Europe
DeutschlandDeutschGermanFranceFrançaisFrenchΕλλάδαΕλληνικάGreekItaliaItalianoItalianČeská republikaČeštinaCzechPolskaPolskiPolishСрбиjаСрпскиSerbianLatvijaLatviešuLatvianLietuvaLietuviųLithuanianMoldovaMoldoveneascăMoldavianБеларусьБеларускiBelarusian
Transcaucasia
ԱրմենիաՀայերենArmenianАҧсныАҧсышәалаAbkhazХуссар ИрыстонИронауОssetianსაქართველოქართულიGeorgianAzərbaycanАzərbaycancaAzerbaijani
Middle East
Sputnik عربيArabicArabicTürkiyeTürkçeTurkishSputnik ایرانPersianPersianSputnik افغانستانDariDari
Central Asia
ҚазақстанҚазақ тіліKazakhКыргызстанКыргызчаKyrgyzOʻzbekistonЎзбекчаUzbekТоҷикистонТоҷикӣTajik
East & Southeast Asia
Việt NamTiếng ViệtVietnamese日本日本語Japanese中国中文Chinese
South America
BrasilPortuguêsPortuguese
NewsfeedBreaking
05:59 GMT'Stop Using Tigers as Props': Furious Netizens Slam Gucci for Featuring Tigers in New Campaign
05:20 GMT'Want My Child Back': Gazan Christian Pleads For Help After 'Brainwashed' Daughter Converts to Islam
05:17 GMTEvery Country in Scandinavia Breaks Daily Infection Records Amid Omicron Surge
04:30 GMTBiden Has 'No Idea' Why Americans Would Question His Mental Fitness, Says He Didn't 'Overpromise'
03:54 GMTOutcry Online After School Employee Seen Taping Mask to Child’s Face
03:14 GMTPrince Andrew's Ex-GF Claims Epstein & Clinton Were 'Like Brothers', 'Loved' Hanging Around With Him
03:03 GMTMurder of 3 Russian Journalists in CAR Likely Committed by 3R Militants
02:48 GMTMonument of Theodore Roosevelt in American Museum of Natural History Removed
01:59 GMTWatch Biden Lose Temper at Young Reporter Over Bull Connor & Voting Rights Remarks
01:34 GMT2nd Solo Presser: Biden Brags of First-Year Accomplishments Amid Low Approval Ratings
01:22 GMT'40 Years of Resistance': Iranian President Says Moscow & Tehran Can Fight Back Together Against US
00:58 GMTNewly Declassified Footage Shows US Drone Strike That Killed 10 Afghan Civilians - Report
00:47 GMTDOJ to Give House January 6 Committee Four Pages of Trump White House Records Not Enjoined
00:13 GMTStudy on Suicide Trends in the US Shows Increased Need for Service Accessibility
YesterdayChina Fast Developing Space Capabilities Represent 'Pacing Challenge' for US, Pentagon Says
YesterdayWhite House Will Distribute 400Mln Free N95 Masks Across US
YesterdayMost Regions in US to See COVID-19 Peaks in First Half of February, Fauci Says
YesterdayJournalists Leave Macron's Press Conference Over President Not Taking Questions - Reports
YesterdayEstonia, Lithuania, Latvia Waiting for US Approval to Send Weapons to Ukraine - Reports
YesterdayStripped of Royal Titles, Prince Andrew Ditches Social Media Accounts