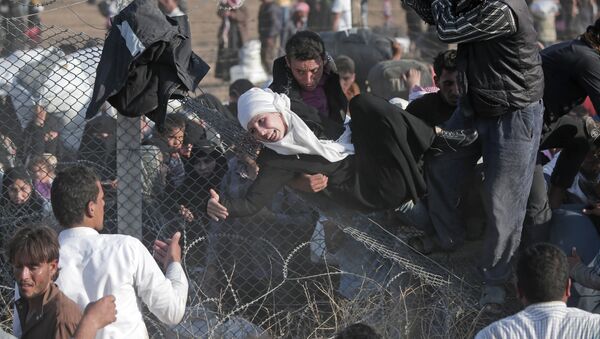 Mass deportation of Syrian refugees staying in Turkey to detention centers against their will by Turkish authorities has prompted human rights activists to raise concern over the country’s illegal and inhumane actions.

EU Complicit in Inhumane Treatment of Refugees in Turkey - Amnesty Int'l
In the wake of the terrorist threat by Daesh based mostly in the Syrian city of Aleppo, Turkish officials reportedly appear to consider all Syrians living there linked somehow to terrorists.

Human rights activists from Amnesty International and a bunch of aid groups claimed that Turkish officials are still rounding up thousands of Syrians, including mendicants to fill detentions centers situated in the Asian parts of Istanbul. According to an Amnesty December study, 100 refugee families have been deported involuntarily.

"It was as if we were criminals," Reuters quoted Ghada, 36, mother of 5, who was forced by Turkish police busted into her Istanbul house to leave everything and go to a bus without citing any reason.

Crying out in fear, Ghada's family from the northern city of Aleppo was sent with a group of other refugees to a detention center in eastern Turkey where they were detained for several days in a building surrounded by razor wire walls and guarded by Turkish police.

"The police knocked the door as if they wanted to break it. We got scared so we didn't open it," Ghada said of the raid. "Then they treated us like we committed a crime. They never told us why or where we were being taken."

Lack of expertise or time in investigating the profile of Syrians living in Aleppo doesn't stop Turkey to act disregarding human rights while detaining Syrians.

Turkey's Refugee Trick: Is Ankara Blackmailing EU Into Dancing to Its Tune?
Turkey has attracted the attention of international human rights watchers this year as the Erdogan-led country reportedly mistreated Syrian refugees as 500,000 of them in attempts to reach Greece risked their lives on their way from Turkey.

Turkey is executing a command of EU that promised to resume talks on Turkey's joining the union in return of the country to restrain refugees entering Europe which continuously failing to host the influx of asylum seekers.

Volkan Gorendag, migration specialist from Amnesty International, said Ankara appear to have doubled the number of detention centers as Ankara and managed to boost its EU joining talks with Brussels. As a part of the agreement, the union was obliged to ensure Turkey was not abusing human rights, he said, describing it as "shocking that EU money is being used to fund an unlawful detention and return program".

According to an aid official, who agreed to speak on conditions of anonymity, masses of Syrian families had already been detained in one busy district of the Turkish capital.

"This is happening every day. If they take a person from a particular area then they will continue to clean out all of the neighborhood," he said.

A 25-year-old neighbor of Ghada, whose family of four shares the tiny basement flat, separated by curtains from Ghada's family, was also forced to go to a detention center with no reason and later released.

Turkey Playing 'Daesh Card to Achieve Its Own Geopolitical Goals'
"We are no criminals, we didn't do anything wrong," Aya said, holding her little daughter in her arms. "We already feel like outsiders here. If we go there we couldn't imagine how it will be," she said. "We are not beggars. We are people who work with dignity. We are poor but we don't bother or hurt anyone."

According to an owner of a neighboring café, the center accepting at least two busloads of people seeking refugee status every week was opened last year. One time he saw a person who attempted to run away over the razor wire.

Ghada said displaced persons from Syria at the center believed they would either be sent to Osmaniye — the place that detains refugees affiliated with crime — or deported to Syria. Aid workers claimed that once at Osmaniye, refugees are forced to choose- either they stay in the camp throughout their time in Turkey or sign a paper promising they are coming back to Syria on their own volition.

Turkish officials deny allegations in forcing any Syrian families back home while saying they detained those connected with criminal gangs.