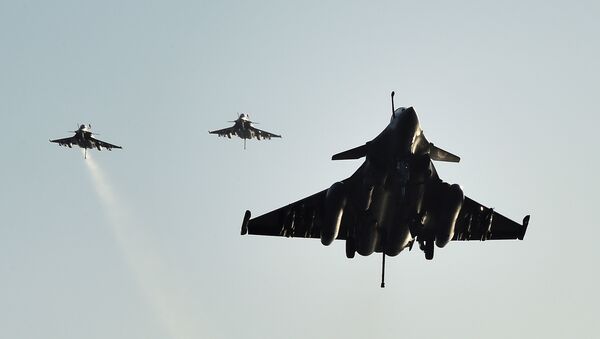 India and France are likely to sign a deal for the sale of 36 Rafale fighter aircraft to New Delhi on January 25 during French President Francois Hollande's visit to India, media reported.

MOSCOW (Sputnik) — According to the India Today newspaper, Indian Defense Minister Manohar Parrikar hopes that India will negotiate up to 25 percent discount for the jets, which would be 75 million euro ($82 million) instead of 105 million euro for each aircraft.

Two countries have been negotiating the deal for over three years.

France Agrees to Reinvest 50% Worth of Rafale Contract in Indian Economy
Earlier in December, Indian Ministry of Defense said that the French side had agreed to reinvest 50 percent worth of the contract on the Rafale fighters for Indian Air Force in the Indian economy.

In September, the Indian Defense Ministry’s top acquisition body gave a go ahead to the decision to continue with the purchase of 36 Rafale fighter jets from France.

The Rafale is a French fourth-generation multirole twin-engine fighter aircraft designed and built by Dassault Aviation.

The supply of full consignment of 36 fighters to the Indian Air Force is expected to be completed within seven years from signing of the deal.

Initially, India planned to buy 126 Rafale jets to modernize its air force. However, in July, New Delhi cancelled its request for 90 jets.

According to Air Chief Marshal Arup Raha, New Delhi also planned to purchase Russian-developed Su-30MKI aircraft and Indian-made TejasMK-II planes for Indian Air Force. According to Raha, the need for new fighters stems from the upcoming retirement of the country's Soviet-made Mig-27 ML fighter jets that have not been upgraded in recent years.