Will Poland Be the Next Chapter in the Political Crisis Plaguing Europe? 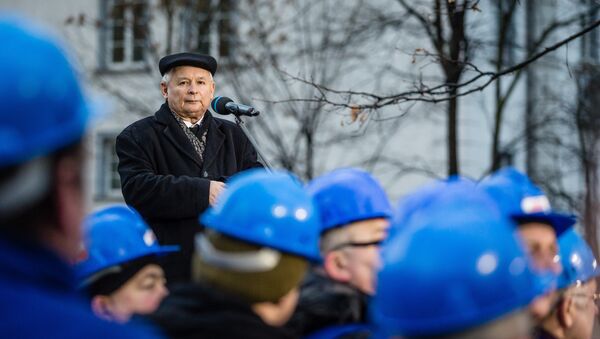 The radicalism and intransigence of Poland's Law and Justice Party, which entrenched itself politically this year by winning both the presidential and parliamentary elections, could not only end up destabilizing Poland, but could send shockwaves throughout the European Union as a whole, warns Austrian political scientist Eric Frey.

In his analysis, published on the site of Austrian daily newspaper Der Standard, Frey suggests that Law and Justice chairman Jaroslaw Kaczynski's coarseness and simple-mindedness could result in the latest chapter to a European crisis which already threatens to overwhelm the beleaguered supranational union.

The journalist notes that "as if the Euro-crisis, Greece, Ukraine, the influx of refugees and the possible withdrawal of Britain from the European Union are not enough, an even bigger crisis awaits us in 2016. The situation in Poland is developing very dramatically, and could shake the European Union to its very foundations."

Frey lays out for his readers a scenario which he believes, unfortunately, "is quite likely."

"The recent elections in Poland," the analyst notes, "brought to power the Law and Justice Party (the PiS), led by Jaroslaw Kaczynski. This is a party which has no respect for the core values of the EU, or for democratic principles. It follows in the tradition of Polish fascism from the period between the first and second world wars, and considers its main objective to be to protect the 'special values' of Poland against enemies both foreign and domestic. For Kaczynski and his colleagues, critics are traitors and enemies of the people who have no place in the political life of the country."

Poland, Lithuania Slam Brussels for Sending 'Optimistic Signals to Moscow'
Compared to Hungarian Prime Minister Viktor Orban, another Eastern European politician who has been accused of authoritarian tendencies, Kaczynski is not only "more cruel, but also less clever."

For his part, Frey suggests, "Orban is much smarter and more tactically agile. Achieving a resounding victory in 2010, he has gradually expanded his power, but has restrained his zeal when he came up against powerful resistance from his opponents."

Orban, furthermore, "has the ability to convince others of the correctness of his policy – in particular with regard to policy on immigration. To this end, for example, he can go to the European Parliament in Strasbourg, offering rhetorically polished speeches. Moreover, he is capable of defending himself eloquently in front of journalists, even if many believe that this erstwhile liberal does not believe everything he says."

Kaczynski, on the other hand, "has never been a liberal – even in the early days of the Solidarity trade union opposition movement. He appears to be convinced in his reactionary beliefs, along with all sorts of conspiracy theories, including a theory that Russia deliberately caused the presidential plane crash which killed his brother Lech in Smolensk in 2010."

Polish President Reawakens Conspiracy Theory Over Kaczynski Plane Crash
Thus, Frey notes, "whereas Orban seeks to push Europe to the right, Kaczynski could care less about the EU, and will not even try to convince anyone."

The PiS, the political scientist warns, "is aiming to restructure the Polish state and eliminate democracy at a record pace. The parliament's recent measure, resulting in the de-facto paralysis of the country's Constitutional Court, was unique for Europe."

"It cannot be excluded that the PiS will use 'their' judges to try to bring charges against ex-Prime Minister Donald Tusk regarding the alleged conspiracy in Smolensk, thereby making it impossible for the European Council president to come home. After all, the EC can grant him diplomatic immunity."

In effect, Frey suggests, if Orban's Hungary nevertheless has a confident, pro-European opposition in parliament, preventing a creeping coup d'état, in Poland, "Kaczynski's party controls the administration of the president, both houses of parliament, and soon, the Constitutional Court, leaving the PiS in control of all the political centers of power, and opposition parties and civil society groups out in the street."

Furthermore, "Kaczynski and his puppets in the government and the presidential administration – Beata Szydlo and Andrzej Duda, presumably, will not tolerate opposition protests, and will make every effort to defend themselves. It is possible that in the coming year, taking a page from the Turkish playbook, Poland will come to see the regular use of teargas. It's even possible that blood will be shed. The PiS is not ready to compromise, and neither is the opposition. Therefore, [former president] Lech Walesa's comments about the possibility of a civil war risk becoming a reality."

Spat Breaks Out Between Poland and German EP Chief Over 'Coup d'État' Jibe
"When PiS took power for the first time, in 2006 and 2007, it was forced to form a coalition with partners with whom it would soon begin to quarrel. Now, it has an absolute majority. An interparty revolt against Kaczynski's authoritarian course cannot be entirely ruled out, but it is unlikely – if there is one thing he has mastered, it is dealing with internal criticism."

Meanwhile, "the Polish economy – an Eastern European model of success – will suffer massively from these events, and this will only serve to further increase tensions. The exchange rate of the zloty will collapse, as will stock prices on the Warsaw Stock Exchange, and foreign investment will cease. But Kacyznski will see this only as proof of a conspiracy of foreigners and financial markets against him and his country."

In this situation, Frey argues, there is disturbingly little the EU can do. "Until 2020, Poland has been guaranteed billions in aid for structural reforms, and reducing it in that period would be an extremely laborious process. The most powerful weapon that the EU has is Article 7 of the Lisbon Treaty, which provides for the suspension of a country's voting rights in the event of systematic violations of fundamental human rights. But even this is unlikely to frighten the PiS."

Poland Raids Country's NATO Training Center, Installs New Chief
"NATO similarly has little opportunity to pressure Warsaw, and the recent raid on the headquarters of a NATO-affiliated counterintelligence center in Warsaw shows just how little the new government cherishes its partnership with the alliance."

"The PiS," for its part, "continues to argue that Russia is a threat, but Putin has no reason to do anything against his country's western neighbor. On the contrary, he can only welcome Kaczynski's actions, which manage to sow discord in the ranks of the EU."

Ultimately, Frey suggests, "the most effective means of exerting pressure on Warsaw would be a threat to expel it from the EU, but this step is not provided for in any of the union treaty documents. At the same time, the more helpless Warsaw's European partners remain amid developments in Poland, the greater the threat becomes that the EU will continue to lose its authority and influence. A Poland which cannot be excluded from the EU could end up being far more dangerous than a United Kingdom which seeks to withdraw."

All in all, the analyst concludes, "where all this may lead remains unclear. However, there is cause for extreme pessimism – both for Poland and for Europe."