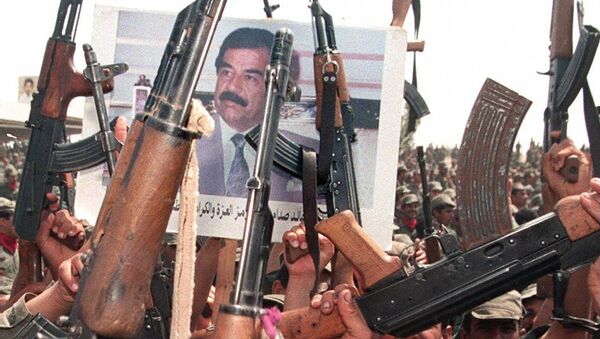 Daesh/ISIL terrorists in Iraq and Syria are believed to depend heavily on the experience of former officers of the armies of late Iraqi leader Saddam Hussein. However, according to counterterrorism expert Alain Rodier, these people's lack of ideological commitment to Daesh's ideology makes it theoretically possible to get them to switch sides.

In his recent interview for French news website Atlantico, Rodier, the director of research at the French Research Center on Intelligence (CF2R), explained that given the vast chasm that exists between the ideology of Ba'athism and Daesh's perversion of Islam, the terrorist group's reliance on Iraqi officers could end up becoming their Achilles heel.

"The Ba'ath (Arab Socialist Renaissance) Party was formed in 1947 in Damascus. Its aim was to unite all the Arab countries in the region into one state. The party came to power in Syria in 1963, retreating for four years and then again emerging at the helm in 1970, continuing to govern to this day. In Iraq, its rule was established in 1968, and it disappeared along with Saddam Hussein in 2003."

Ex-Intel Chief Admits US Was 'Dumb' on Middle East Strategy After 9/11
"Originally," Rodier noted, "the Ba'ath Party advocated Arab socialism, and insisted on the secular nature of its state institutes, aimed at protecting all religious communities."

"Over time, the Syrian and Iraqi branches of the party began to diverge, ultimately separating entirely. It's worth remembering that during the first Gulf War against Iraq, Syria joined with the 34 country coalition, which included the US, Britain, France, Saudi Arabia, Turkey, etc."

"When Iraq found itself under international sanctions after 1991, no one paid much attention to the fact that Saddam Hussein's regime began to change. From secularism, it gradually became religious. The building of palaces gradually gave way to the building of mosques, including the world's largest – in Baghdad. The words "Allah Akhbar" were added to the national flag. Drinking alcohol in public places and restaurants was banned."

"Of course," Rodier noted, "Hussein took these steps for political reasons, seeking to unite the power of Islam with Arab nationalism. However, this also entailed direct consequences for appointments in party and state institutions. The New Republican Guard was evaluated on its Islamic faith, and secular ideology gradually began to be forgotten."

"After the US-led invasion in 2003, these sentiments increased dramatically, because Iraqis felt themselves to have been the victims of a terrible injustice. Only Ba'ath cadres and radical Islamists, united against a common enemy, were able to offer any resistance."

"He joined the Islamic State of Iraq, the forerunner to Daesh. He went on to become a Daesh commander upon the group's formation in 2013. The Islamic State, in turn, officially appeared on the scene on June 29, 2014. It was reported that al-Douri was killed in April 2015, but his death has not been confirmed."

"Other former high-ranking representatives of Saddam Hussein's regime serve in Daesh's army, and its intelligence service – some out of conviction, others out of opportunism. They were the ones in charge of mastering the somewhat sophisticated captured Syrian and Iraqi military equipment (tanks, artillery, communications equipment, etc.). After all, only they knew how to use it."

Asked by his interviewer whether these former Ba'athists could now be negotiated with to crack Daesh's unity, Rodier noted that "the idea, of course, is appealing. It was already applied by the Americans between 2006-2008 via the 'Sons of Iraq' militia, associated with the 'Awakening' movement. For the most part, they consisted of members of Sunni tribes in the Anbar province. At that time, the region had become one of the most peaceful in Iraq."

Tony Blair Accused Over Cover-Up of Report on Illegal Iraq War
"Today, this region is almost entirely in the hands of Daesh. Iraq's Shia authorities had committed to making the fighters of these units part of the national army, or even to invite them to join public service. Former members of the Ba'ath Party, too, were promised to be reinstated, or at least offered pensions."

Unfortunately, the expert noted, "most of these promises have not been kept. All of this created an atmosphere of extreme suspicion, and as a result, Sunnis and former Ba'athists have no confidence in the central government in Baghdad. The presence of Iranian Revolutionary Guard near the Shi'ite troops has not reassured them."

Still, Rodier says, "this does not mean that nothing can be done in this direction. One can try to convince Iraqi authorities to grant amnesty and official recognition to those who agree to fight against Daesh, to allocate space in state institutions for Sunnis and former Ba'ath activists, to convince the latter of the sincerity of such steps. But for now, this is all just wishful thinking."

Ultimately, the intelligence expert emphasized that "intelligence services have a key role to play in this war: to create contacts between those people with whom it is officially impossible to do so, to reach agreements, to collect information from human sources to complement the technical ones, to take concrete steps and to act. But in order for this to happen, it is necessary for politicians to give such an order."