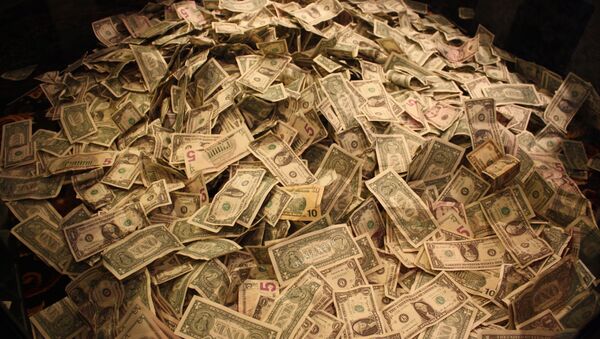 © Flickr / reynermedia
Subscribe
For nearly two years, independent journalists and analysts in the US and Europe have been saying that sanctions against Russia should be repealed. Now, surprisingly, even the hawkishly anti-Russian foreign policy journal Foreign Affairs has joined the chorus, a recent article suggesting that sanctions have been nothing but a costly mistake.

The comprehensive analysis, written by CATO Institute Visiting Fellow Emma Ashford, offers few kind words for Russia or its leaders, using phrases like 'Kremlin cronies', and alluding to Russia's 'behavior', as if the country was a child that needed to be taught a lesson. Nonetheless, as far as Western sanctions against Russia are concerned, Ashford laid down the truth. And the truth stings.

At first glance, the analyst suggested, "considering the dire state of Russia's economy, [Western] sanctions might appear to be working. The value of the ruble has fallen by 76 percent against the dollar since the restrictions were imposed, and inflation for consumer goods hit 16 percent in 2015. That same year, the International Monetary Fund estimated, Russia's GDP was to shrink by more than three percent."

"In fact, however," she notes, "Western policymakers got lucky: the sanctions coincided with the collapse of global oil prices, worsening, but not causing, Russia's economic decline. The ruble's exchange rate has tracked global oil prices more closely than any new sanctions, and many of the actions taken by the Russian government, including the slashing of the state budget, are similar to those it took when oil prices fell during the 2008 financial crisis."

Obama's Christmas Gift: What is Behind New US Sanctions Against Russia
"The sanctions have inhibited access to Western financing, forcing Russian banks to turn to the government for help. This has run down the Kremlin's foreign reserves and led the government to engage in various unorthodox financial maneuvers, such as allowing the state-owned oil company Rosneft to recapitalize itself from state coffers. Yet the Russian government has been able to weather the crisis by providing emergency capital to wobbling banks, allowing the ruble to float freely, and making targeted cuts to the state budget while providing financial stimulus through increased spending on pensions."

Therefore, Ashford points out, "even with continued low oil prices, the [IMF] expects that growth will return to the Russian economy in 2016, albeit at a sluggish 1.5 percent."

"Nor are the sanctions inflicting much pain on Russia's elites," the analyst wistfully continues. "Although Prada and Tiffany are doing less business in Moscow, the luxury housing market is anemic, and travel bans rule out weekend jaunts to Manhattan, these restrictions are hardly unbearable. One target, the close Putin adviser Vladislav Surkov, has dismissed them as harmless. "The Only things that interest me in the US are Tupac Shakur, Allen Ginsberg, and Jackson Pollock," he said. "I don't need a visa to access their work.""

Most importantly, Ashford notes, "when the sanctions are judged by the most relevant metric –whether they are producing a policy change – they have been an outright failure."

"Whatever punishment the sanctions have inflicted on Russia," Ashford writes, "it has not translated into coercion," despite the Obama administration's expectations "that it would have by now."

Noone Knows Why, but EU Extends Anti-Russia Sanctions for Six Months
Furthermore, "the Kremlin has also managed to circumvent the sanctions, partly by turning to China. In May 2014, Putin visited the country to seal a 30-year, $400 billion gas deal with it, demonstrating that Russia has alternatives to European gas markets. That October, Moscow and Beijing also agreed to a 150 billion yuan currency swap, allowing companies such as Gazprom to trade commodities in rubles and yuan – and thus steer clear of US financial regulations."

"Even in Europe," the analyst points out, "Russia has been able to find loopholes to avoid sanctions: in order to obtain access to Artic drilling equipment and expertise, Rosneft acquired 30 percent of the North Atlantic drilling projects belonging to the Norwegian company Statoil."

As for the sanctions' impact on Russia's political leadership, Ashford suggests that this may be the area where they are "most counterproductive. The sanctions have had a 'rally round the flag' effect as the Russian people blame their ills on the West. According to the Levada Center, a Russian research organization, Putin's approval rating increased from 63 percent" before Crimea's accession to Russia "to 88 percent by October 2015. In another poll, more than two-thirds of respondents said they thought the primary goal of the sanctions was to weaken and humiliate Russia."

Moreover, Ashford argues, sanctions "have also encouraged Russia to create its own financial institutions, which, in the long run, will chip away at the United States' economic influence. After US senators and some European governments suggested that the United States might cut off Russia's access to the Society for Worldwide Interbank Financial Telecommunication (SWIFT) payment system, the Russian Central Bank announced that it was going to start negotiations with the other BRICS states – Brazil, India, China, and South Africa – to create an alternative."

Anti-Russia Sanctions 'Humiliating' for Europe
"To lessen its dependence on Visa and MasterCard, Russia has made moves toward setting up its own credit-card clearing-house. And it has moved ahead with the proposed BRICs development bank, which is designed to replicate the functions of the World Bank and the International Monetary Fund."

These measures add up, Ashford suggests, raising "the worrying possibility that the United States will someday have a harder time employing economic statecraft," (i.e. applying economic pressure), not just against Russia, but against other, smaller nations as well. "In a world where more institutions fall outside the reach of the United States and its allies, [potential] targets can more easily circumvent US sanctions."

"It is true," the analyst notes, "that the sanctions have allowed the Obama administration to claim that it is doing something about Russian aggression. From the White House's perspective, that might be an acceptable rationale for the policy, so long as there were no downsides. In fact, however, the sanctions carry major economic and political costs for the United States and its European allies."

"The brunt is being borne by Europe, where the European Commission has estimated that the sanctions cut growth by 0.3 percent of GDP in 2015. According to the Austrian Institute of Economic Research, continuing the sanctions on Russia could cost over 90 billion euros [$98.75 billion US] in export revenue and more than two million jobs over the next few years."

Biting the Hand That Feeds You: Anti-Russian Sanctions to Cost EU €100 Bln
The sanctions, Ashford writes, "are proving especially painful for countries with strong trade ties to Russia. Germany, Russia's largest European partner, stands to lose almost 400,000 jobs. Meanwhile, a number of European banks, including Societe Generale in France and Raiffesen Zentralbank in Austria, have made large loans to Russian companies, raising the worrying possibility that the banks may become unstable, or even require bailouts if the borrowers default."

US companies, further away and less heavily involved in trade with Russia, are nonetheless also taking a big hit, according to the analyst.

"US energy companies, for their part, have had to abandon various joint ventures with Russia, losing access to billions of dollars of investments. Thanks to prohibitions on the provision of technology and services to Russian companies, Western firms have been kept out of unconventional drilling projects in the Artic and elsewhere. ExxonMobil, for example, has been forced to withdraw from all ten of its joint ventures with Rosneft, including a $3.2 billion project in the Kara Sea."

This, Ashford says, will cost the company "access to upstream development projects" in Russia, while "putting the company's future profits and stock valuation at risk and raising the possibility that the money they've already invested will be permanently lost."

"A similar dynamic may harm European energy security, too," threatening shortfalls in the supply of Russian energy. "The energy consultancy IHS Cambridge Energy Research Associates has predicted that if the sanctions persist, Russian oil production could decrease from 10.5 million barrels per day now to 7.6 million barrels per day by 2025 – bad news for European states, which receive one-third of their oil from Russia. They are even more dependent on Russian gas, which, since it relies more on fixed pipelines, is harder to replace."

Ultimately, Ashford notes, "it is tempting to believe that the sanctions will eventually work – say, after a few more years –but that is wishful thinking."

Europe Kicks the Can On Russian Sanctions Decision
"If the United States continues to insist that the sanctions against Russia need more time to work, then the costs will continue to add up, while the likelihood of changing the Kremlin's behavior will get even slimmer."

In the final analysis, the expert calls for the winnowing of sanctions, and for an increased effort by US diplomats "to work with their Russian counterparts on issues unrelated to the Ukraine crisis. The United States and Russia collaborated on the Iran nuclear deal," Ashford recalls, and can cooperate on ending the civil war in Syria, too.

"Engaging Russia on this and other non-Ukrainian issues would avoid isolating it diplomatically and thus discourage it from creating or joining alternative international institutions," the analyst slyly concludes.