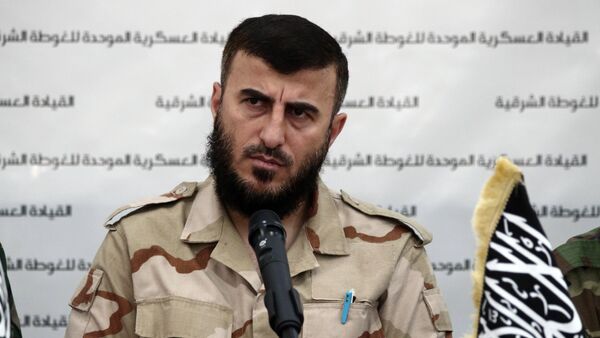 The Syrian army confirmed on Friday that Zahran Alloush, the leader of Jaysh al-Islam terrorist group operating in the suburbs of the capital, Damascus, has been killed in an airstrike by the Syrian air force.

DAMASCUS (Sputnik) — Earlier reports indicated that Alloush along with seven other terrorist field commanders and 10 militants had been killed.

"The Syrian air force has carried out airstrikes, following intelligence reports and assistance by respected citizens, targeting terrorist groups in the eastern suburb of Damascus. As a result, terrorist Zahran Alloush was killed," the army said in a statement.

Play By the Rules: Foreign Armies in Syria Must Work With Gov't Forces

According to BBC, Jaysh al-Islam named Issam al-Buwaydani (also known as Abu Humam) from the city of Douma northeast of Damascus as its new leader.

Syria has been in a state of civil war since 2011, with the army loyal to President Bashar Assad fighting several opposition factions and militant groups.

Jaysh al-Islam, an Islamist group formed by a merger of several Syrian opposition groups in 2013, is notorious for its atrocities, including the public executions of prisoners, drawing comparisons with the Daesh in Arabic militant group, which is outlawed in Russia and many other countries.

Jaysh al-Islam has repeatedly shelled Damascus and its suburbs with mortar rounds and rockets, killing hundreds of civilians.