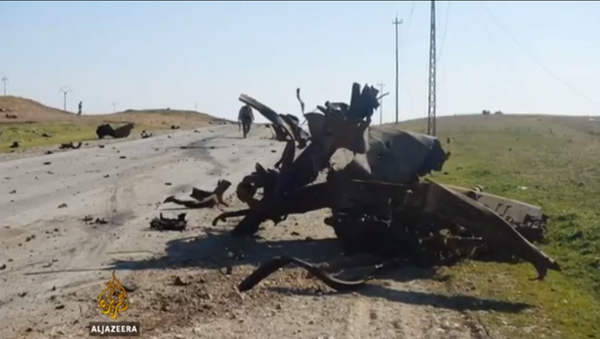 © YouTube/News of the World
Subscribe
Moscow hopes those guilty of the terrorist act using sarin gas in Syria will be found, Russian Foreign Ministry spokeswoman Maria Zakharova said in a statement published on the ministry’s official website Friday.

Erdogan Lashes Out at Lawmaker for Revealing Turkey-Sarin-Daesh Cover-Up
MOSCOW (Sputnik) – Moscow hopes that those who are guilty of using sarin gas in Eastern Gouta in Syria will be properly punished, Russian Foreign Ministry spokeswoman Maria Zakharova said in a statement published on the ministry’s official website Friday.

“We hope that sooner or later the true perpetrators and organizers of this and other similar crimes will be identified and be properly punished,” Zakharova said in her statement.

She said that in 2013 several sources, including from Turkey, revealed information on the deliveries of chemical weapons, in particular sarin gas, to militants connected with al-Qaida from the Syrian opposition.

The latest to speak publicly on the allegations was opposition Republican People’s Party (CHP) member Eren Erdem, who disclosed to the RT broadcaster last week Ankara was aware of sarin supplies to terrorist groups via Turkey.

Erdem faces treason charges after raising concerns of a possible cover-up following the sudden termination of a local criminal case into the illegal shipments.

Zakharova's statement echoed Russian Foreign Minister Sergei Lavrov’s remarks earlier on Friday after meeting his counterpart from Qatar, who stressed the work of an existing joint UN-Organization for the Prohibition of Chemical Weapons (OPCW) mechanism investigating the claims.

The Syrian government and the UN signed the Joint Investigative Mechanism (JIM) on December 12, with Damascus agreeing to support the JIM to conduct its activities in accordance with UN decisions.

The JIM was established on August 7, 2015, to identify people, who were involved in the use of chemicals as weapons in Syria.

A mission to eliminate Syria's chemical arsenal was announced after a deadly gas attack killed hundreds outside Damascus in August 2013. Moscow urged Damascus to place its chemical weapons under international control. Syria agreed to the Russian initiative.

Sarin is a lethal gas, classified by the UN Resolution 687 as a weapon of mass destruction and banned by the UN Chemical Weapons Convention of 1993. By late October 2014, the OPCW declared nearly 98 percent of the chemical weapons in Syria have been removed and destroyed.