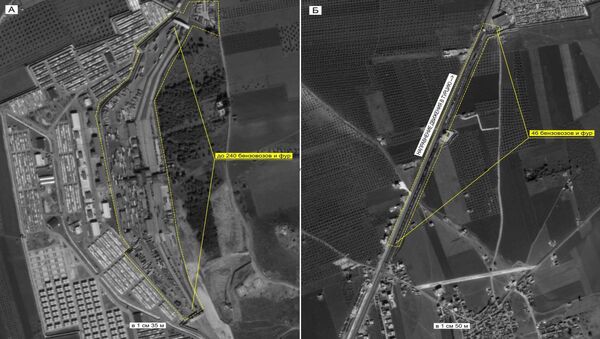 Russian aviation has completed over 5,200 sorties in Syria since the operation began on September 30, the chief of the Russian Armed Forces said Friday.

"Since September 30 Russian aviation has conducted 5,240 sorties in Syria, including 145 sorties by long-range aviation," Lt. Gen. Sergei Rudskoy, chief of the Main Operational Directorate of the General Staff of the Russian Armed Forces said.

"Yesterday alone we carried out 189 strikes on the terrorist strongholds, 142 of which were planned, while the rest were newly identified" Rudskoy added.

Supply Cut Off: Syrian Army Cuts Damascus Smuggling Route
The Syrian government forces with Russian aviation accictance have liberated five populated areas in the province of Aleppo, he said. Moreover, government forces continue to expand the safety zone around the Kweiris airport and intensify offensives in the south-western direction to Idlib.

Syrian forces, with Russian air support, are tightening the encirclement of illegal armed groups in the suburbs of Damascus, Lieutenant-General Sergei Rudskoi, the head of the Main Operations Directorate of the General Staff, told reporters on Friday.

"In the suburbs of Damascus, [Syrian] government forces have taken control of the village of Marj al-Sultan, and are continuing their raids, narrowing the encirclement of illegal armed groups in the areas of Nashabiya, Nula, Duma and Zibdin," Rudskoi said.

Moreover, according to the officer, in other areas, Syrian forces are taking measures to stabilize the situation and are preparing to continue their offensive.

Syrian government troops have reclaimed control over the key Jebel Noba height, the chief of the Russian armed forces said.

"In the province of Latakia, the Syrian assault squads have waged offensives to the north and the east. They have taken control over the key offensive area of the Jebel Noba," he said.

Syrian forces, backed by Russian aviation, are narrowing the encirclement of illegal armed groups in the suburbs of Syria's capital Damascus, the head of the Russian General Staff’s operations department said Friday.

He added that that other positions near the populated area of Kepir were also cleanses of militants.

"At the time of [reconaissanse] filming in the Zakho area there were 11,775 petrol tankers and semi-trucks on both sides of the Turkish-Iranian border. 4,530 of them were on Turkish territoty, 7,245 were in Iraq," Rudsloy said. "I must note that oil extracted in Iraq, as well as Syria, comes through this check point [on Turkish-Iraqi border]."

Tankers belonging to the terrorists have been disguised as lorries and have been constricted to moving at night, Lt. Gen. Rudskoy noted.

"The northern and western routes which we previously revealed continue to be used. In order to avoid losses to Russian aviation, the terrorists move [the oil convoys] mainly at night. Moreover, their tanker trucks are disguised as ordinary lorries, and move in small columns of several dozen vehicles at a time," Rudskoy said.

According to him, the route leads from Daesh-controlled Deir ez-Zor, through the Syrian border towns, to the Iraqi cities of Mosul and Zakho.

The column of tanker trucks follow the shortest route to the Iraqi-Syrian border, Sergey Rudskoy told journalists. However, despite the destination detour, Turkey still remains the ultimate destination of the terrorists' oil smuggling scheme, he noted.

The number of tanker trucks near Turkey's Dortyol port, where Islamic State oil is allegedly delivered, has grown to 920, the head of the Russian General Staff’s operations department said Friday.

"One must understand that the profits from the smuggling of any products are used to finance Daesh, and any country participating in this illegal business is involved in international terrorism," Lt.Gen. Sergei Rudskoy told reporters.

"We are in constant contact with the command of Syria's government troops and with units of the patriotic opposition. They regularly provide additional information about newly discovered terrorist targets," Lt.Gen. Sergei Rudskoy told reporters, adding that decisions to carry out airstrikes are taken only after further reconnaissance.

Earlier, Amnesty International had published a report on Russian forces operating in Syria, claiming that Russian military aviation was involved in the bombing of civilian targets, resulting in civilian casualties.

The Russian Defense Ministry responded by saying that the report consists of clichés and fakes, and that the human rights group approached its subject matter in a biased manner, publishing unverified information on the activities of Russian aircraft in Syria and claiming it to be factual.