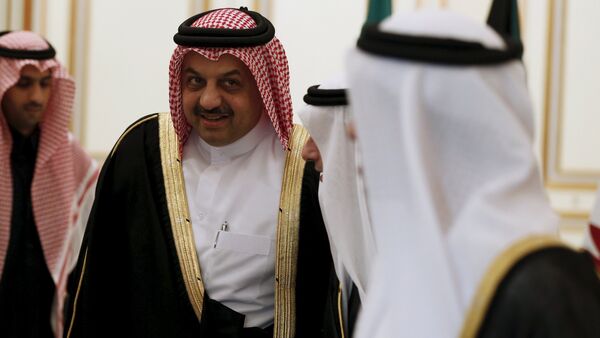 © REUTERS / Faisal Al Nasser
Subscribe
Minister of Foreign Affairs of Qatar said that Doha is against the creation of any list of terrorist groups operating in Syria before the talks on the Syrian reconciliation begin.

Russia, Qatar Share Similar Ideas on Bolstering Security in Persian Gulf
MOSCOW (Sputnik) – Doha is against the creation of any list of terrorist groups operating in Syria before the talks on the Syrian reconciliation begin, Minister of Foreign Affairs of Qatar Khalid bin Mohammad Attiyah said Friday.

"As far as the last part of the question regarding lists and classifications of different organizations and groups, we are against such classifications. We believe that the most important for us is to understand what made certain groups take up their weapons, to understand goals and aims," the minister said in a press conference with Russian Minister Sergei Lavrov.

"If we understand and realize what is behind this, then we can come to joint approaches and find the right way. We are ready to continue working on bringing our positions together and supporting a serious political process with an aim to resolve and put an end to this tragedy," he added.

Qatar does not consider Syrian President Bashar Assad a legitimate authority and believes he should not lead the Arab republic in the future, Minister of Foreign Affairs said.

"I have talked about this before. Our country considers Bashar Assad an illegitimate president, especially after he had used chemical weapons and other unacceptable weapons against his people," Attiyah said after talks with Russian Foreign Minister Sergei Lavrov.

Lavrov acknowledged that Moscow and Doha are at odds over Assad’s fate.

"We believe that he cannot lead Syria in the future," Attiyah said.

The creation of a military force within the framework of the Islamic coalition against terrorism is not being discussed, Khalid bin Mohammad Attiyah said.

"Currently we are talking about information exchanges related to movements of people and funds. The issue of creating military forces has not been discussed yet. We are trying to concentrate our efforts on the fight against the terrorism ideology, and so our Islamic coalition is not cooperating with the [US-led] coalition acting in the military sphere," the minister said at a press conference with Russian Foreign Minister Sergei Lavrov.

000000
Popular comments
First, repeats the lie that Assad used chemical weapons in Ghouta. Then it appears this is the Engdahl "ceasefire trap": if there is a ceasefire, but no list of terrorists, the ceasefire could apply to everyone. That won't happen. The Qataris are lying murdering thieves, sad that Russia is dealing with them.
dvdgrg09
25 December 2015, 13:50 GMT
000000
Why Russi wasting it's time with this people? they were part of creating terrorists. And everyone knows the truth. It was Mc Cain the one that went to support opposition and radicals. Why Russia wasting Time? Just go support ground troops, stop oil flows by blown any vehicle transporting oil and forget it.
cast235
25 December 2015, 13:59 GMT
000000
Newsfeed
0
New firstOld first
loader
LIVE
Заголовок открываемого материала
Access to the chat has been blocked for violating the rules . You will be able to participate again through:∞. If you do not agree with the blocking, please use the feedback form
The discussion is closed. You can participate in the discussion within 24 hours after the publication of the article.
To participate in the discussion
log in or register
loader
Chats
Заголовок открываемого материала
Worldwide
InternationalEnglishEnglishMundoEspañolSpanish
Europe
DeutschlandDeutschGermanFranceFrançaisFrenchΕλλάδαΕλληνικάGreekItaliaItalianoItalianČeská republikaČeštinaCzechPolskaPolskiPolishСрбиjаСрпскиSerbianLatvijaLatviešuLatvianLietuvaLietuviųLithuanianMoldovaMoldoveneascăMoldavianБеларусьБеларускiBelarusian
Transcaucasia
ԱրմենիաՀայերենArmenianАҧсныАҧсышәалаAbkhazХуссар ИрыстонИронауОssetianსაქართველოქართულიGeorgianAzərbaycanАzərbaycancaAzerbaijani
Middle East
Sputnik عربيArabicArabicTürkiyeTürkçeTurkishSputnik ایرانPersianPersianSputnik افغانستانDariDari
Central Asia
ҚазақстанҚазақ тіліKazakhКыргызстанКыргызчаKyrgyzOʻzbekistonЎзбекчаUzbekТоҷикистонТоҷикӣTajik
East & Southeast Asia
Việt NamTiếng ViệtVietnamese日本日本語Japanese俄罗斯卫星通讯社中文（简体）Chinese (simplified)俄罗斯卫星通讯社中文（繁体）Chinese (traditional)
South America
BrasilPortuguêsPortuguese
NewsfeedBreaking
01:37 GMTUS ‘Humiliated Like Never Before’, Trump Says, After DHS Allowed Thousands of Migrants to Pour in
01:31 GMTLockheed Martin to Build US Army’s Next Generation Tactical Vehicle Based System
01:10 GMTBorder Patrol Agents Disgruntled Over Biden's Attempts to Throw Them 'Under the Bus' - Report
00:53 GMTBeard-Check: Afghan Barbers Banned From Shaving, Trimming Beards - Reports
00:27 GMTR. Kelly Found Guilty: Will Artist Be Removed From Music Services?
00:03 GMTIs Sir Alex Ferguson Right, That Ronaldo, and not Messi, Could Score a Hat-trick for Anyone?
00:00 GMTUS Senator Menendez Urges New Sanctions on Turkey if It Acquires More Russian Weapons
YesterdayInsurgents Who Detained President of Guinea Declare Transitional Charter - Reports
YesterdayTexas Lawmakers Propose New Congressional Districts in Cities of Austin, Houston
YesterdayIOM Looking for Alternatives for Haitians at US Border, Brazil Being 1 Option - Sources
YesterdayCzech Republic Will Purchase Israeli-Made Air Defenses to Replace Soviet Gear
YesterdaySPD Leader Scholz Says Yet to Hear Congratulations From CDU/CSU Rival
YesterdayTaliban Say Norwegian NGO Promises to Ship Humanitarian Aid to Afghanistan This Winter
YesterdayUS Blue-Chip, Tech Stocks Fumble on Worries of Rate Hike
YesterdaySerbian Troops Monitoring Situation at de-Facto Serbia-Kosovo Border Amid Protests
YesterdayUnidentified Man Threatens Journalist, France's Potential Would-Be President Eric Zemmour - Reports
YesterdaySenate Republicans Vote to Block Gov't Funding, Debt Limit Bill Just Days Ahead of Shutdown Deadline
YesterdayGOP Slam 'Economically Illiterate' Admin After It Claims $3.5 Trillion Bill Costs 'Zero Dollars'
YesterdayUS President Joe Biden Aims to Save Obama-Era Policy DACA
YesterdayUK Calls Renewable Energy Main Alternative to Gas as Energy Crisis Deepens