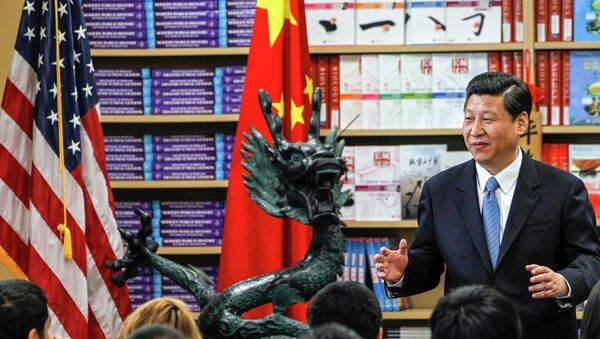 According to the Chinese calendar, 2015 has been the year of the goat – whose characteristics include auspiciousness, heralding promise and prosperity. And, despite a few setbacks, the calendar has been true to its word. Sputnik looks back at some of the important events which have helped to secure China's place as an emerging superpower.

2015 has been a propitious year for China, the country making simultaneous advances on all fronts – from consolidating its position in international financial institutions, to major geopolitical moves, to dabbling in efforts to defend historical memory and to offer a new concept of a world order based on 'mutual respect and win-win cooperation'. From economics and politics to geopolitics and philosophy, 2015 has, with a few hiccups, been an important year.

To start off, it would be remiss not to mention probably China's biggest setback of the year – the summer's stock market crash, which affected the economic prospects of not just China, but the world as a whole. Taking place in mid-June, with major aftershocks occurring in July and August, the crash led to trillions of dollars-worth of lost assets, and even to panicky predictions that August's 'Black Monday' was comparable to the Wall Street Crash of 1929.

World Economy Hanging in Balance in 2015
Financial experts are still arguing about the causes of the crash, with everything from currency devaluation to a flawed US Federal Reserve policy, to a deliberate shift toward a new economic model to Wall Street manipulations aimed at undermining China's economy given as causes. With markets stabilizing, Chinese regulators have since announced a number of anti-crisis measures including, beginning January 1, a 'stock-index circuit breaker', charged with preventing the type of radical swings which sowed the summer's chaos.

But enough doom and gloom. Along with the stock market crash, this summer also saw the creation of an institution charged with serving as an alternative to global financial institutions dominated by the West – the Asian Infrastructure and Development Investment Bank (AIIB).

On June 29, 57 prospective founding nations signed a legal framework to determine each country's prospective share of voting rights, along with the AIIB's initial capital of $50 billion – due to be doubled after the bank launches operations on investment projects in the Asia-Pacific region. China, India and Russia are set to serve as the new bank's major shareholders, with 20%, 7.5% and 5.9% of the votes, respectively.

Set to commence operations in mid-January 2016, Russian officials have already praised the AIIB for its promise to roll back global financial unipolarity. At the Russian parliamentary session to ratify the AIIB held earlier this month, Russian Deputy Finance Minister Sergei Storchak emphasized that the new institution would be "the largest [global financial] institution created since World War II after the International Monetary Fund and the World Bank."

Russian Strategic Moves in East Asia Leave US Policymakers in a Panic
The summer also marked the opening of the ambitious New Development Bank (NDB) project, created by BRICS member states last year, which began operations in Shanghai on July 21. With a currency pool of $100 billion, the bank's goal is to mobilize resources for funding infrastructure and sustainable development projects, serving as a global alternative to the Western-dominated World Bank.

This year, China also made progress with over 60 partner nations, including Russia, on its ambitious New Silk Road project, charged with integrating trade and investment in Eurasia, and ensuring China's economic security in case of aggression against vulnerable sea routes in the world's oceans. With important progress made this year in laying the infrastructure for the project, Chinese officials have voiced hopes that the annual trade turnover between China and other Silk Road partner countries could exceed $2.5 trillion within a decade. As far as Russia's role in the project is concerned, negotiations culminated in May with the signing of a joint declaration on the construction of the Silk Road Economic Belt – the land-based component of the trade route.

On September 3, China held a parade in honor of the 70th anniversary of the end of the Second World War. In addition to showcasing China's growing military might, the parade, more importantly, demonstrated Beijing's intention to create a new project to preserve historical memory, righting the historical wrong of China's underestimated and undervalued contribution to victory in the global war against fascism.

West Underestimates Sino-Russian Alliance, Neglects Historical Lessons
According to experts, the commemorations — the first of their kind — also marked a budding effort to reconcile China's post-civil war history, with Chinese President Xi Jinping emphasizing the contributions not only of the Communist armies, but of the nationalist Kuomintang as well. This effort would be further solidified in November, with the Chinese leader meeting for direct talks with his Taiwanese counterpart for the first time in 70 years. Calling the meeting a 'historic moment', analysts have suggested that future historians may consider the meeting an important landmark in efforts to bring a real and lasting end to the Chinese civil war.

As far as the historical significance of the Second World War to China's contemporary relationship with the rest of the world is concerned, President Xi emphasized that his country's wartime efforts "put an end to China's national humiliation of suffering successive defeats at the hands of foreign aggressors in modern times," reestablishing "China as a major country in the world."

September's parade also gave hints on China's vision for the establishment of a new world order — "a new type of international relations" based on "mutual respect, equality, peaceful development and common prosperity" based on "win-win cooperation."

2015 marked several landmark events in giving more weight to China's currency – the yuan. In October, Beijing launched the China International Payments System (CIPS), a yuan-based alternative to the Western SWIFT payment system, removing hurdles to the Chinese currency's internationalization by reducing transaction costs and processing times. With up to 19 major banks signing on as direct participants, and nearly 180 Chinese and foreign institutions named as indirect participants, CIPS is now expected to make efforts to overtake SWIFT, beginning in Asia.

Rounding out Beijing's major moves for 2015 was the announcement, made late last month, that the Chinese Navy would create a naval logistics center in the northeast African nation of Djibouti –serving as China's first real, permanent military base abroad, and the first step, according to some experts, to China's status as a great naval power.

Equal Rivals? China May Push Out US as the Sole Superpower
Terrifying US analysts, the base, Russian experts suggest, indicates Beijing's intentions to increase military power to secure its interests abroad and, just as importantly, the Chinese Navy's transformation from a coastal force into a real ocean-going fleet.

For its part, the United States has reacted to China's growing economic and geopolitical clout with a series of half-hearted attempts to introduce a strategy of military and economic Containment 2.0. Nevertheless, more and more US analysts seem to recognize that an effort to maintain US hegemony over the whole world seems not only counterproductive, but also impossible.

Ultimately, the Chinese New Year, celebrated at the turn of the lunisolar Chinese calendar, doesn't fall until February 8, 2016. Therefore, China still has plenty of time to make further efforts to solidify its role as the world's newest economic, political, and military superpower. Next year will be the year of the monkey, associated with curiosity, cleverness and mischievousness. Only time will be able to tell what Beijing has in store for the world.