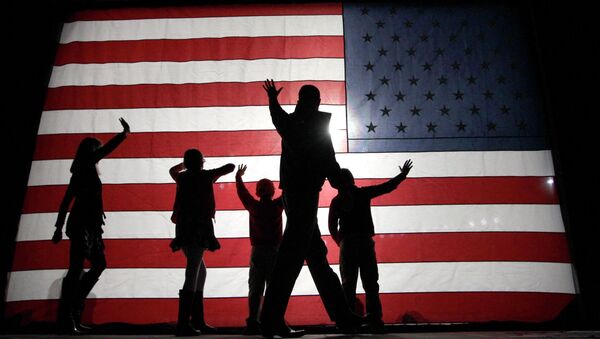 © AP Photo / Mary Altaffer
Subscribe
The main topics of US presidental run that was started in the year of 2015 are war on terror, gun controls and so on.

WASHINGTON (Sputnik) — The year 2015 saw the start of the next US presidential election campaign with hopeful candidates addressing the problems and failures of the current Obama administration such as handling the fight against terrorism and gun control.

Surprise outsiders like Donald Trump for the Republicans and Bernie Sanders for the Democrats offered dramatic alternatives on foreign policy and security issues to establishment figures like Hillary Clinton and Jeb Bush.

Trump and Sanders rejected confrontation and hostility with Russia and proclaimed their desire to work constructively with Moscow, especially in fighting the Islamic State, also known as Daesh, and other terrorist groups.

According to all opinion polls, Clinton, a former first lady, senator and secretary of state, retained a strong lead among Democratic voters.

US Presidential Campaigns Spend $111Mln on Ads in 2015
However, her one major challenger, self–described "democratic socialist" Senator Sanders of Vermont, continued to draw larger personal crowds and performed well in nationally broadcast debates with her.

In his November 19 speech at Georgetown University in Washington, DC, Sanders articulated the basic theme of his campaign, and described the problems Obama had failed to tackle during his seven years in the White House.

However, some of the biggest surprises were in the ongoing race for the Republican nomination.

Trump, a billionaire businessman and media star, jumped to a strong early national lead and held it throughout the year, despite — or because of — his highly controversial calls to deport millions of illegal immigrants and his propensity to personally insult rival candidates who attacked him.

On December 23, a CNN/ORC International poll showed Trump widening his commanding lead among Republican voters to 39 percent with his nearest rival, Senator Ted Cruz of Texas, pulling only 13 percent.

"I want to make this country great again," he stated on May 20, a theme which he would repeat throughout his campaigning.

Former Florida Governor Jeb Bush, the favorite of the old Republican establishment and of the hardline foreign policy circles who surrounded his brother George W. Bush when he was president, had a disastrous year.

"At 3 percent, Jeb Bush is in free fall," a CNN headline read on December 4.

By the end of the year, establishment support looked likely to switch from him to Florida Senator Marco Rubio, who was running third behind Trump and Texas Senator Ted Cruz in opinion polls.

Obama failed to make any progress in reducing the appalling toll of domestic gun violence in the United States: 2015 saw more horrific mass killings than ever.

On June 17, nine African Americans were murdered by self-described white racist Dylan Roof while attending a Bible Study at the Emanuel Church in Charleston, South Carolina.

On December 12, Syed Rizwan Farook and Tashfeen Malik, a husband and wife pair of jihadists, killed 14 people during a Christmas Party at a social care center in San Bernardino, California.

"We have a pattern now of mass shootings in this country that has no parallel anywhere else in the world," Obama told CBS News on December 2.

After the San Bernardino killings, the New York Daily News noted that Obama had made at least 12 public speeches and issued 15 public statements in response to such massacres. But he had taken no implementable actions to control or limit sales of guns, especially automatic weapons.

It was a year of humiliation and change of direction in the US war against the Islamic State, which is a designated terror group and outlawed in numerous countries, including in Russia.

On September 16, the US Central Command (CENTCOM) head General Lloyd Austin, Jr. shocked the Senate Armed Services Committee by admitting that "only four or five" of the planned 5,400 Free Syrian Army fighters trained by the US military were still active in any way against the Islamic State forces.

Senate Armed Services Committee Chairman John McCain responded that Austin’s testimony was "the most inept" he had ever heard during his nearly three decades in the Senate.

The Department of Defense reacted by stepping up air strikes against the Islamic State in Syria as well as Iraq, and sent less than 50 Special Operations soldiers to advise and train local forces.

By the end of the year, the United States had finally agreed with Russia on a process to resolve the Syrian Civil War, which had taken 400,000 lives and created three to four million refugees since 2011.

US Enhancing Information Sharing on Terrorism With Europe, Other Countries
Obama also faced criticism on his plans to let at least 10,000 Syrian refugees into the United States. Some critics claimed this was far too few given the enormity of the problem. But numerous others argued that an unknown number of jihadists would enter the country among the refugees.

In December, Obama also approved a review of screenings of visas applications from Muslims, especially fiancées, after the San Bernardino massacre.

In addition, the Obama administration faced widespread criticism around the world over its use of drones to target Islamist fighters.

Analysis conducted by human rights group Reprieve in 2014 found that in targeting only 41 men, 1,147innocent people were killed by US airstrikes.

The US armed forces also faced angry global criticism when a C-130 gunship repeatedly strafed a hospital in Kunduz, Afghanistan run by Doctors Without Borders (MSF) on October 3. At least 42 people were killed and another 33 remain missing, making a probable total death toll of 75.

The year ended with Obama ordering 9,500 US troops to remain in Afghanistan to prop up the government in Kabul.

In Iraq, the year ended with the US position there more precarious than at any time in the previous 12 years.

It was the first time in the 66-year history of NATO that any Alliance member had ever shot down any Soviet or Russian aircraft. However, Turkish President Recep Tayyip Erdogan refused to apologize to Moscow and the Obama administration made no effort to persuade or pressure him to do so.

Turkey, a major US ally, reinforced its military deployment in Iraq with about 150 soldiers backed by artillery and 25 tanks in a base near the Islamic State-controlled northern city of Mosul on December 4.

In November, the Security and Defense Committee of the Iraqi parliament called on the Baghdad government to terminate its security treaty with the United States.

The Iraqi government and autonomous Kurds in the north of the country ended the year seeking closer ties with Russia as their distrust of both the United States and Turkey grew.

Obama acknowledged in an interview on National Public Radio broadcast on December 22 that he had failed to reassure the American people in the face of growing terror threats.

"If you've been watching television for the last month, all you have been seeing, all you have been hearing about is these guys with masks or black flags who are potentially coming to get you. So I understand why people are concerned about it," he said.

One of Obama’s proudest achievements was the restoration of diplomatic relations with Cuba after a break of 54 years on July 20.

However, seven years after he became president, the facility for holding terrorist suspects on the US military base at Guantanamo Bay on Cuba has remained open, despite his pledge to close it down prior to leaving office.

Nothing to See: Media Access to Guantanamo Bay Tightened
On December 18, Obama told a White House press conference he would continue slowly reducing the number of detainees still held in Guantanamo, and that he was prepared to use executive action ultimately to close it.

Obama took no action to lift or ease economic sanctions against Russia or to work cooperatively with Moscow to resolve the ongoing crises in Ukraine and Syria.

Instead, administration and Pentagon officials continued to criticize Russian policies and claim Moscow was their number one enemy around the world.

US relations with China also deteriorated.

US Defense Secretary Ashton Carter angered Beijing by visiting the US nuclear aircraft carrier Theodore Roosevelt when it was deployed in the South China Sea on November 5.

US aircraft and ships continued to escalate tensions with close approaches to Chinese islands and waters.

On December 10, Beijing announced that two B-52 strategic nuclear bombers had flown within two miles of Chinese territory in the Spratly Islands.

MIXED MESSAGES FROM US PRESIDENTIAL CANDIDATES

At year’s end, Clinton still remains the Democratic frontrunner and favored victor by most US political pundits. If elected, she looked likely to continue Obama’s hawkish, confrontational policies against Russia and China as well as in the Middle East.

Her chief challenger, Sanders, disagreed with her on those issues while also advocating dramatically increased domestic spending and a withdrawal from many of America’s sprawling political commitments around the world.

But a CNN/ORC International poll released on December 23 showed Democratic voters preferring Clinton’s on foreign policy to Sanders by 72 percent to 15 percent.

Like Sanders, he criticized the Trans Pacific Partnership free trade agreement, and urged new tariff barriers to cut America’s enormous annual trading deficits. He also pledged to build a physical wall along the 1,989-mile US land border with Mexico.

Trump and Sanders said they wanted to pull all US military forces out of the Middle East. The common denominator in their disagreement with Clinton is that they are both urging cooperation with Russia as well as other countries, rather than confrontation, and a reduction of US policy and posture acting as a sole international arbiter.

000000
Popular comments
An excellent summary. But why, like with so many Sputnik articles, do we never see a byline? Why all the ongoing anonymity?