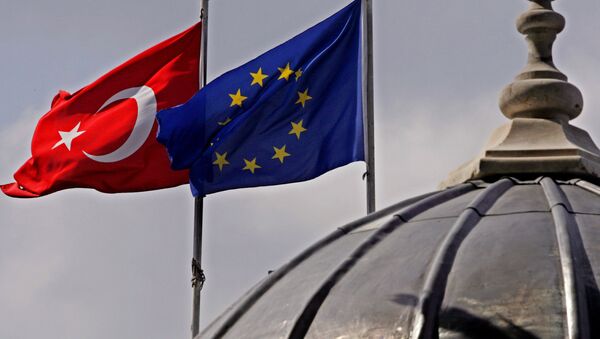 The EU used the wrong tactics in its relations with Turkey, which is having a destabilizing effect on a wide array of other countries, according to the German online newspaper Freie Welt.

Turkey’s Shadow Economy 'Way Too Big' for EU’s Taste
By believing in President Erdogan's promises, Brussels used the wrong tactics in developing its ties with Ankara, which currently remains a factor of instability for NATO, the US, Europe, Germany, Russia, Iraq, the Middle East and the Kurds, the German online newspaper Freie Welt reported.

Under Erdogan, Turkey is playing with fire, Freie Welt said, referring to Ankara spoiling relations with Moscow and waging war against its own people.

However, the EU cannot change anything because it depends on the Turkish government, which pledged to provide conditions for the admission of refugees on the Turkish-Syrian border and thus reduce the flow of migrants to Europe, Freie Welt recalled, citing the fact that Brussels had offered Turkey three billion euros to stem the migration crisis.

A refugee man sleeping on the street in Izmir, Turkey. #refugees #refugeecrisis pic.twitter.com/0TMi4Bj20q

The newspaper had warned against trusting Erdogan, who it claimed pursues his personal interests and commits crimes against his own people. Freie Welt also lashed out at Brussels's promise to consider the issue of Turkey's accession to the EU.

"Turkey today is a factor of instability for NATO, the US, Europe, Germany, Russia, Iraq, the Middle East and the Kurds. In view of this, it is frankly strange how one can think of Turkey joining the the EU", Freie Welt said.

The newspaper recalled that Syrian migrants are currently held in special detention facilities in Turkey, which violates the European Convention on Human Rights.

Swept Under the Carpet: EU Ignores Refugees' Rights Violation in Turkey
The situation in Turkey sharply deteriorated after at least 33 Kurdish activists were killed in a suicide terrorist attack carried out by Daesh in the Turkish city of Suruc on July 20.

Adding fuel to the fire were subsequent killings of scores of policemen in the country's south-eastern provinces by the Kurdistan Workers' Party (PKK), which is banned in Turkey.