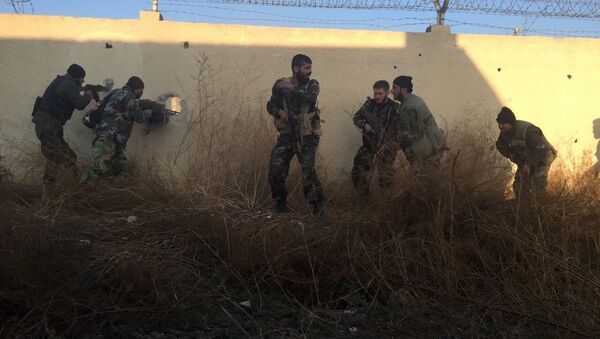 The Syrian army has reportedly driven Daesh militants out of more areas in Syria's north-western province of Latakia.

Syrian Army Repels Militants’ Attack on Strategic Airbase Near Damascus
Islamic fundamentalist militants have been driven out of more areas in Latakia province in north-western Syria, according to the Iranian news agency FARS.

"The Syrian army alongside the National Defense Forces (NDF) launched massive operations in the mountainous regions of Northern Lattakia, and completed their control over vast territories after killing or wounding scores of militants," FARS quoted sources as saying.

The army's new offensive came after the government troops, supported by Russian airstrikes, completed control over Jabal al-Nuba (al-Nuba Mountains) and Jabal Sheikh al-Sayyid near the border with Turkey.

Dozens of militants were killed and many more wounded in the fighting, sources said.

Earlier this week, it was reported that the Syrian forces continued their military operations to regain control of Salma, a key city in Latakia, from Islamist militants.

In another development, the Russian fighter jets launched a series of air raids on Daesh militants' strongholds in several areas across Latakia.

In particular, the Russian warplanes targeted terrorists' positions in the mountain of al-Nuba and the city of Salma in Latakia's northern countryside.

According to sources, defense lines of Daesh militants in a region between al-Koz and al-Aswad al-Kabir mountains were massively stormed by the Syrian government forces, who pushed back the terrorists from their positions and regained a whole array of strategic heights.

Enemy Within? 'Extremism Exists Inside Saudi-Led Coalition' Against Daesh
The Russian air campaign was launched on September 30, when more than fifty Russian warplanes, including the Su-24M, the Su-25 and the Su-34, commenced precision airstrikes on Islamic State targets in Syria at the behest of Syrian President Bashar Assad.