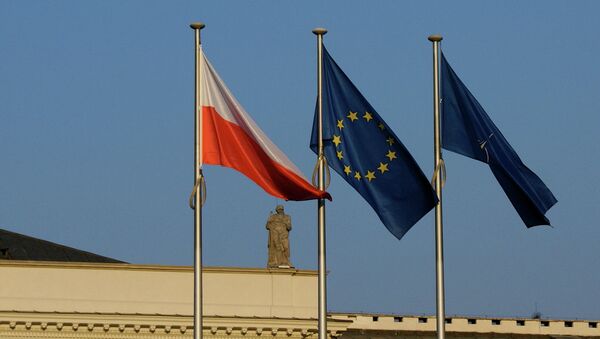 © Flickr / alex.ch
Subscribe
Poland’s new government has been slammed by the EU over controversial new legislation that reportedly undermines the rule of law in the country.

Victory of Poland's Nationalist Party 'Will Complicate Relations With EU'
The European Commission, in a letter published on Wednesday, urged Polish ministers not to implement the new law "until all questions regarding the impact of this law on the independence and functioning of the Constitutional Tribunal have been fully and properly assessed."

Poland passed the law Tuesday, changing the functioning of the country's constitutional court. The new legislation provoked a wave of criticism at home and abroad.

EU concern was raised as the Commission "attaches great importance to preventing the emergence of situations whereby the rule of law in (a) member state could be called into question," Frans Timmermans, the EU Commission Vice-President, said.

The constitutional crisis gathered thousands of protesters and supporters of the ruling party who blame the conservative government for threatening democracy in Poland.

On Wednesday, former president Lech Walesa lashed out at the policies of the ruling Law and Justice Party (PiS), which passed the law. He urged for a referendum for early elections.

"This government is acting against Poland's interests, against freedom, against democracy, and is ridiculing us around the world," Walesa said on Radio Zet.

A constitutional crisis was allegedly forced by the PiS as ruling party leader Jaroslaw Kaczynski won majorities in both houses of parliament in October.

The new law requires the limit for the court's rulings from a simple majority to a 2/3 majority and for most controversial cases it requires the presence of thirteen judges, compared to nine.

EU Commission letter to Poland on the rule of law and the composition of the Constitutional Tribunal https://t.co/1VhBmJ0VZ5

​According to the new legislation, waiting periods will be prolonged to three to six months between the time a request for a ruling is made and its verdict, compared to current 14 days.

The country's top court, together with ruling party opponents, claim that the new legislation, believed likely to easily pass the Senate and the President, will erase checks and balances on the new conservative government and weaken the Supreme Court.

000000
Popular comments
""This government is acting against Poland's interests, against freedom, against democracy, and is ridiculing us around the world," Walesa said" -- I SMELL ANOTHER WESTERN DECEPTION COMING ON. Those are just procedural changes. They do not threaten "checks and balances". I'm gonna say more likely than not, there is something in this ruling that keeps THE WESTERN PUPPETS in check. I bet we'll find out sooner or later that Poland is trying to loosen the globalist's death grip on their country...wait and see.

Ann
25 December 2015, 05:56 GMT1
000000
but isn't this simply another sign of the solidification of conservative political forces in Europe? Surely allowance was made for this in the creation of the E.U.as an entity. There was never going to be a complete unanimity to last through the years.
michael
25 December 2015, 02:30 GMT
000000
Newsfeed
0
New firstOld first
loader
LIVE
Заголовок открываемого материала
Access to the chat has been blocked for violating the rules . You will be able to participate again through:∞. If you do not agree with the blocking, please use the feedback form
The discussion is closed. You can participate in the discussion within 24 hours after the publication of the article.
To participate in the discussion
log in or register
loader
Chats
Заголовок открываемого материала
Worldwide
InternationalEnglishEnglishMundoEspañolSpanish
Europe
DeutschlandDeutschGermanFranceFrançaisFrenchΕλλάδαΕλληνικάGreekItaliaItalianoItalianČeská republikaČeštinaCzechPolskaPolskiPolishСрбиjаСрпскиSerbianLatvijaLatviešuLatvianLietuvaLietuviųLithuanianMoldovaMoldoveneascăMoldavianБеларусьБеларускiBelarusian
Transcaucasia
ԱրմենիաՀայերենArmenianАҧсныАҧсышәалаAbkhazХуссар ИрыстонИронауОssetianსაქართველოქართულიGeorgianAzərbaycanАzərbaycancaAzerbaijani
Middle East
Sputnik عربيArabicArabicTürkiyeTürkçeTurkishSputnik ایرانPersianPersianSputnik افغانستانDariDari
Central Asia
ҚазақстанҚазақ тіліKazakhКыргызстанКыргызчаKyrgyzOʻzbekistonЎзбекчаUzbekТоҷикистонТоҷикӣTajik
East & Southeast Asia
Việt NamTiếng ViệtVietnamese日本日本語Japanese俄罗斯卫星通讯社中文（简体）Chinese (simplified)俄罗斯卫星通讯社中文（繁体）Chinese (traditional)
South America
BrasilPortuguêsPortuguese
NewsfeedBreaking
22:15 GMTN. Cyprus to Convey at UN Talks Its Desire for Sovereign Equality - President
21:51 GMTUS Still Going After Terrorists Responsible for Kabul Airport Attack - Pentagon
21:45 GMTPentagon on Milley Proposal: US-Russia Military Contacts Limited to Syria Deconfliction
21:22 GMTPrince Andrew Acknowledges Serving of Sex Assault Accuser's Lawsuit in US
21:21 GMTCanadian Judge Signs Discharge Order Releasing Meng Wanzhou From Custody
21:16 GMTPuigdemont to Return to Sardinia for Court Hearing on October 4 - Attorney
20:47 GMTVIDEO: Huge Shockwave Explodes From La Palma Volcano
20:37 GMTBiden Will Not Invoke Executive Privilege Rule Regarding Trump Activities - White House
20:27 GMT'Horrendous!': MTG, Democrats Get in Shouting Match on Capitol Steps After Abortion Vote
20:15 GMTCIA Tip-Off Helped India Confiscate Smuggled Afghan Heroin Worth $24 Bln, Says BJP Parliamentarian
20:05 GMTUS House Passes Bill Ensuring Abortion Access
19:49 GMTIndia 'Central' to France's Indo-Pacific Vision, But Unlikely to Get Nuclear Technology, Says Expert
18:59 GMTManchester United’s Glut of Attackers Giving Ole Gunnar Solskjaer ‘Headaches’
18:50 GMT‘The View’ Co-hosts Test Positive for Covid Minutes Before VP Harris Interview
18:10 GMTHuawei CFO Meng Wanzhou Pleads Not Guilty to Fraud, Conspiracy Charges After Reaching Deal With US
18:04 GMTOne Hundred and Counting: China Rolls Out Evidence of US Attempts at Meddling in Hong Kong Affairs
17:56 GMTCan He Hit a Ball Like That? Trump Jeers at Biden as He Shows Off Golfing Skills
17:54 GMTProtesting Indian Farmers’ Leader Urges US President to Raise Their Concerns While Meeting PM Modi
17:47 GMTUnited Airlines Fined $1.9M by US Transportation Dept. for Breaking Rules on Long Tarmac Delays
17:38 GMTNetizens Left in Stitches After Canadian PM Trudeau Fails to Pronounce LGBTQ2+