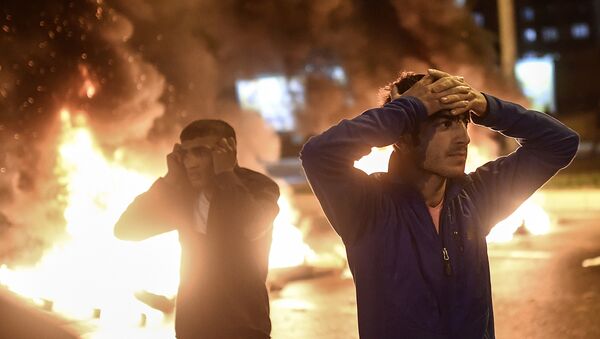 © AFP 2023 / Bulent Kilic
Subscribe
International
India
Africa
100 Kurdish women and children were killed in southeastern Turkey over the past six months, said the Human Rights Watch and added that the number is not exact. The victims died during government special operations and armed clashes.

Tensions between Turkish authorities and Kurdish opposition escalated in July after the latter broke a ceasefire agreement and accused Ankara of supporting Daesh (Islamic State). After, HRW called on the Turkish government to suspend military operations and launch a full-scale investigation.

Kani Xulam, Kurdish activist and director at the American Kurdish information network spoke to Sputnik in an exclusive interview saying that Ankara would never do that.

He spoke about how the Turkish government is waging cultural genocide on Kurds.

How Fatal Would Russia’s Alliance With Kurds Be for Turkey?
“Curfews have been imposed in the number of cities and people cannot step outside. There is bombing going on and if people are injured they cannot get to the hospital. Electricity and water have been cut off. It is an undeclared war that Turkey is waging on its Kurdish civilian people in cities throughout south and east of the country,” Xulam told Sputnik in an interview.

He further said, “There are 20 million people living in the country with no basic human rights, no political rights and are forced to assimilate Turkish culture, language and literature. The Kurds are saying that they have had enough and they want local autonomy.”

The activist called this a cultural genocide and ethnic cleansing in a sense that people are not allowed to express themselves. He said that this is against the international law and against any norms. “Turkey is denying the very existence of the Kurds in its constitution and is forcing them to be assimilated.”

“The fury is that what is happening in Syria can easily be duplicated in Turkey. The fault lines are exactly the same in Turkey where the Sunni majority wants to impose on Kurds and Alawites. Turkey could become easily like Syria,” Xulam said.

He further noted that, “Turks will never investigate their own abuses. They never had, they never will. It could end up in a civil war.”

Talking about whether there are independent observers and international journalists who could highlight the situation of the Kurdish people, Xulam said, “There was a journalist to document this from the Netherlands, but as soon as these hostilities by Turkish government began they made the journalist persona non grata, bought her a ticket and sent her home. As far as I know there are no independent observers here.”

The activist said that Turkish journalists try the best they can to report on these clashes but they are imprisoned if they report against the Turkish government.