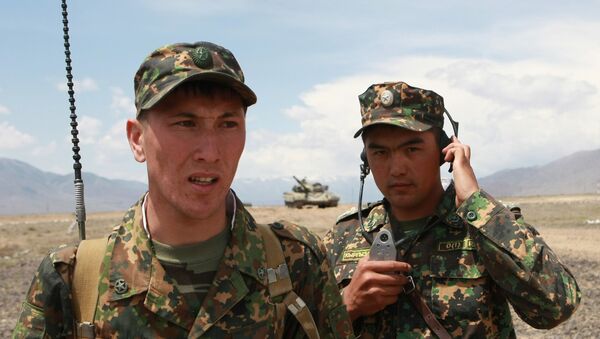 © Sputnik / Vladimir Pirogov
/
Go to the photo bank
Subscribe
Russia is beefing up the Kyrgyz Armed Forces in order to make them more capable of fighting off terrorists.

MOSCOW (Sputnik) – Russia is actively rearming Kyrgyzstan’s military out of the need to counter the Islamic State, known as Daesh in the Arab world and prohibited in a range of countries including Russia, as well as to fight other terrorist organizations, Russian Defense Minister Sergei Shoigu said Wednesday.

“From our side, we are doing everything possible in order to complete the plan for rearming the Kyrgyz Armed Forces so that they can counter threats that are coming [out of Afghanistan],” Shoigu said during a meeting with Kyrgyz Chief of the General Staff Zhanybek Kaparov in Moscow.

“There are real threats, we see them, and I think you do, too,” Shoigu told Kaparov.

Central Asia has seen a rise in violent religious extremist groups since the collapse of the Soviet Union.

Terrorists From Afghanistan May Engulf Central Asia - Kyrgyz Official
According to Interpol, terrorist affiliates operating in the region are focusing more and more on the recruitment of new members, particularly young people, and spreading radical ideology over the Internet.

Earlier in the day, the Kyrgyz Interior Ministry said that some 50 terrorist groups, including the Islamic State, were currently operating on the territories of the members of Collective Security Treaty Organization.

In the period of acute terrorist threat at the turn of the 1990s, Kyrgyzstan also turned to Russia with a request to provide military and technical assistance in the fight against extremists, and Moscow's assistance proved effective.

000000
Popular comments
It is one of a number of buffer countries between Russia and Islamic jihadis. The US wants to import jihad directly into Russia via these countries. That's why Grand Master Putin is getting them armoured up!